You have reached the cached page for https://www.rottentomatoes.com/m/closed_circuit_2013
Below is a snapshot of the Web page as it appeared on 10/21/2020 (the last time our crawler visited it). This is the version of the page that was used for ranking your search results. The page may have changed since we last cached it. To see what might have changed (without the highlights), go to the current page.
You searched for: closed circuit movie ny times review We have highlighted matching words that appear in the page below.
Bing is not responsible for the content of this page.
Closed Circuit (2013) - Rotten Tomatoes
Home
Top Box Office
Tickets & Showtimes
DVD & Streaming
TV
News 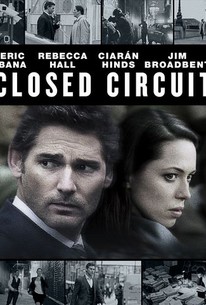 Slick and well acted, Closed Circuit unfortunately never quite works up a full head of steam, with a plot that's alternately predictable and full of holes.

A terrorist attack in London results in the capture of suspect Farroukh Erdogan (Denis Moschitto). The attorney general appoints Claudia Simmons-Howe (Rebecca Hall) as special advocate on Erdogan's legal team. On the eve of the trial, Erdogan's lawyer dies, and a new defense attorney, Martin Rose (Eric Bana), steps in. Martin and Claudia are former lovers, a fact which must remain hidden. As Martin assembles his case, he uncovers a sinister conspiracy, placing him and Claudia in danger.

RT on DVD & Blu-Ray: Archer, Closed Circuit, and More
Critics Consensus: One Direction: This Is Us is Lightweight But Entertaining
Video Interview: Cast & Director of Closed Circuit
View All