You have reached the cached page for https://perfectpuree.com/inspiration/chef-michael-gottlieb/
Below is a snapshot of the Web page as it appeared on 12/4/2020 (the last time our crawler visited it). This is the version of the page that was used for ranking your search results. The page may have changed since we last cached it. To see what might have changed (without the highlights), go to the current page.
You searched for: chef michael gottlieb We have highlighted matching words that appear in the page below.
Bing is not responsible for the content of this page.
Spotlight: Chef Michael Gottlieb, Executive Chef, Bistro Bordeaux - The Perfect Puree of Napa Valley 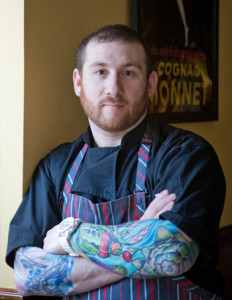 One of Michael Gottlieb’s first memories in the kitchen is making meatballs from scratch with his uncle when he was about eight years old. The Food Network was making its mainstream debut at the time and Michael was fascinated by food and the art of cooking. He was naturally drawn to it and always knew that he wanted to be a chef.

His first job at age 14 was making pizzas at Italian Kitchen in Deerfield. Throughout high school, Michael worked part-time in a high-end hotel kitchen. After graduating, he enrolled at Le Cordon Bleu College of Culinary Arts in Chicago, continuing to work in restaurants like Gabriel’s Restaurant in Highwood and Carlos’ Restaurant in Highland Park. Michael served as sous chef at The Palm and as chef de cuisine at Bank Lane Bistro. Before joining Bistro Bordeaux as executive chef in early 2013, he helped open Second Street Bistro.

A few years ago, Michael traveled to a small fishing village in Alaska, where he experienced what it’s like to catch fresh Copper River Salmon or Halibut, then return straight to the kitchen to create a dish. This has influenced the way he looks at food and always fresh and expertly prepared. At Bistro Bordeaux, Michael serves classic French bistro fare, including many seafood dishes like his trout served with a Meyer Lemon Thyme Beurre Blanc made with The Perfect Purée Meyer Lemon Concentrate.

Brewing with The Perfect Purée