You have reached the cached page for https://www.dailymail.co.uk/tvshowbiz/article-5490957/What-Cameron-Diazs-net-worth.html
Below is a snapshot of the Web page as it appeared on 10/25/2020 (the last time our crawler visited it). This is the version of the page that was used for ranking your search results. The page may have changed since we last cached it. To see what might have changed (without the highlights), go to the current page.
You searched for: cameron diaz net worth We have highlighted matching words that appear in the page below.
Bing is not responsible for the content of this page.
What is Cameron Diaz's net worth? | Daily Mail Online

What is Cameron Diaz's net worth?

After nearly two decades in the film business, Cameron Diaz is ready to leave it all behind.

The actress, who's known for appearing in iconic films like The Mask, There's Something About Mary, Charlie's Angels and more, recently told friend Selma Blair she was 'done' acting.

Cameron, 45, and Selma were reminiscing about The Sweetest Thing, which they appeared in together in 2002, when she made the revelation that she no longer wished to be an actress. 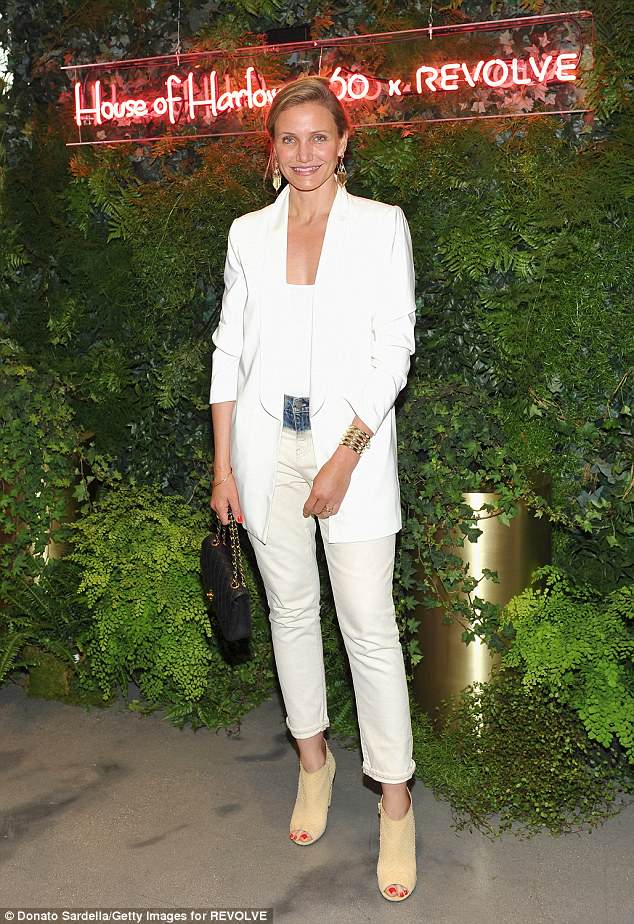 Cameron Diaz has decided to retire from acting, according to friend and fellow star Selma Blair

Speaking at the Vanity Fair Oscars pre-party in Los Angeles last week, Selma said: 'I had lunch with Cameron the other day, we were reminiscing about the film.

'I would have liked to do a sequel but Cameron's retired from acting, she's like "I'm done"'.

We're sisters because of our misters and I am SO impressed by and proud of how talented she is. Her capsule collection at Revolve is a wonderful reflection of her spirit and her style; sexy and chic, playful and grounded, feminine with a hint of masculine, retro yet contemporary. Congrats and ������ @nicolerichie #hohxrevolve

Instead, she wants to focus on husband Benji Madden, whom she married in 2015 after being introduced by Nicole Richie.

So how much is Cameron Diaz worth?

Who is Cameron Diaz?

At 16 years old she landed a contract with Elite Model Management, working with companies like Calvin Klein and Levi's. In 1990, she appeared on the cover of Seventeen magazine. She also modeled for several months in Australia and appeared in a commercial for Coca-Cola that was shot in Sydney.

Cameron really rose to fame in the 90s, appearing in iconic films like The Mask, My Best Friend's Wedding and There's Something About Mary. After proving herself an exceptional comedic actress, Cameron began to take on more serious roles and, again, excelled.

Happy Birthday to my Beautiful Wife ❤️ I feel like I am the LUCKIEST guy ALIVE❤️ I don't think anyone could ever know the Depth, Kindness, and Compassion that I get to experience everyday thanks to My One and Only- You got me til the end baby❤️❤️❤️

In 2010, after she'd appeared in several top-grossing films, Forbes named Cameron the second richest female celebrity of that year. She was beat out just slightly by Sandra Bullock and tied with Reese Witherspoon.

Even after receiving this title, Cameron continued to push her career. In 2013 she released The Body Book: The Law of Hunger, the Science of Strength, and Other Ways to Love Your Amazing Body. She followed with a second book, titled The Longevity Book: The Science of Aging, the Biology of Strength and the Privilege of Time, in 2016.

Cameron Diaz is believed to be worth a whopping $140 million (£100.8m), according to Celebrity Net Worth.

Every Sunday, mine and my Brothers Wives, all make dinner for the whole family, and all of us and the kids spend the evening together. It's My favorite time of the week. Feeling very grateful for my beautiful Wife ❤❤❤and my whole family❤ I feel lucky I get to spend my life with these people ❤���� Good vibes from the Madden Fam. ������ #dontworry #idothedishes ����������

How did Cameron Diaz make her money?

Most of Cameron Diaz's fortune comes from films. In 2015 it was estimated that all together her films had made more than $3 billion (£2.1b) in the United States and more than $7 billion (£5b) worldwide.

Cameron was paid $10 million (£7.2m) for her voice acting work in Shrek alone.

Today is the day! The LONGEVITY BOOK is out! ��❤️��My Beautiful&Fearless Wife @camerondiaz set out to Encourage women, and ALL of US to invite a new conversation about Aging, and the privilege of time. I'm so proud����My best friend, my Heart, and the most bad ass Chick I know������������❤️❤️❤️ Go get'em baby #luckyman #mywife #bestseller #keepliving #newaging

Cameron Diaz has appeared in several blockbuster films, including The Mask, My Best Friend's Wedding, There's Something About Mary, Being John Malkovich, Charlie's Angels, The Sweetest Thing, and more.

In 2010, things took a slight downturn. Vanilla Sky, which Cameron appeared in alongside Tom Cruise, performed poorly at the box office upon its release. It went on to rake in $262 million (£188.6) worldwide, but it's poor early earnings coupled with mixed reviews from critics are why it's not as revered as some of her other projects.

The Green Hornet, Bad Teacher, What to Expect When You're Expecting, Gambit, The Counselor, The Other Woman and Sex Tape had similar issues.

Cameron's luck changed in 2014 when she was cast as Miss Hannigan in Annie. While some critics didn't much care for her acting in the film, it's largely viewed as having been successful. Annie grossed $133 million worldwide (£95.7m).

About seven months after meeting, Cameron and Benji were engaged. Then, seventeen days later, they married in an intimate ceremony held at her Beverly Hills, California, home.

According to Celebrity Net Worth, Benji Madden's net worth is an estimated $14 million (£10m).

One of my favorite things about being married, is how much pride I take in my husband @benjaminmadden... He makes me proud everyday.. One day it might be how generous and giving, another how gentle and thoughtful. Or when he is fiercely protective of the people he loves and cares about... And everyday single day I am so incredibly proud of his integrity as a human being.. But TODAY what I'm most proud of is his talent... his gift.... Today his band @goodcharlotteband released their first album in 6 years #YouthAuthority .. What makes me even more proud is that he has released it on his own independent label MDDN... And it is so damn GOOOOOOOOD... Its so full of love and hope and truth... about forging and holding onto love... I wish that everyone could write music to express their pain.. their fears... their hopes and dreams. Baby you amaze me... CONGRATS!! @goodcharloteband @mddnco #youthauthority #proud http://apple.co/YouthAuthority

What is Cameron Diaz's net worth?