You have reached the cached page for https://www.filmibeat.com/bollywood/movies/brothers.html
Below is a snapshot of the Web page as it appeared on 11/28/2020 (the last time our crawler visited it). This is the version of the page that was used for ranking your search results. The page may have changed since we last cached it. To see what might have changed (without the highlights), go to the current page.
You searched for: brothers movie download We have highlighted matching words that appear in the page below.
Bing is not responsible for the content of this page.
Brothers (2015) | Brothers Movie | Brothers (Brothers Hindi Movie) Bollywood Movie Cast & Crew, Release Date, Review, Photos, Videos – Filmibeat 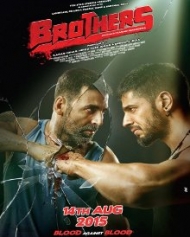 Brothers is the official remake of Hollywood movie ‘Warrior’ which is the story of two estranged brothers.

The story revolves around the complex relationship between the father and his two sons (played by Sidharth Malhotra and Akshay). The movie is an emotional journey of David  (Akshay) and Monty (Sidharth) as they come face to face in their fight for love, hatred and family.

Story in detail:
The film tells the story of a broken family, set in the world of mixed martial arts and underground street fighting.