You have reached the cached page for https://naturalsociety.com/how-to-know-buying-innate-gmo-potato/
Below is a snapshot of the Web page as it appeared on 4/3/2020 (the last time our crawler visited it). This is the version of the page that was used for ranking your search results. The page may have changed since we last cached it. To see what might have changed (without the highlights), go to the current page.
You searched for: british food scientists who studied gmo potatoes in texas for sale in nc We have highlighted matching words that appear in the page below.
Bing is not responsible for the content of this page.
How to Know if You're Buying the New GMO Potato
Skip to main content

How to Know if You’re Buying the New GMO Potato

There has been talk for years over the development of a new genetically modified potato. Now, the USDA recently gave the green light for one of the worlds largest agribusinesses to create a GMO potato that produces fewer carcinogens than non-GM potatoes when fried. Simplot, the company responsible for its future creation, will soon be putting these GMO potatoes on dinner plates across the United States unless the decision is reversed. So how will you know if your potato is genetically modified or not?

As mentioned, Simplot’s GM creation will be engineered to produce less of a carcinogen (75% less) which normally forms when potatoes are fried or heated. But that isn’t all these ‘super potatoes’ will be able to do. They will also be modified to bruise less easily and to not turn brown for many hours after being cut (see picture below).

The potatoes reportedly underwent ‘successful’ field trials in 8 states between 2009 and 2001: Florida, Indiana, Idaho, Michigan, Nebraska, North Dakota, Washington and Wisconsin. And of course, Simplot claims they are safe:

“This approval comes after a decade of scientific development, safety assessments and extensive field tests,” said the Idaho-based Simplot, which annually processes about 3 billion pounds of potatoes. 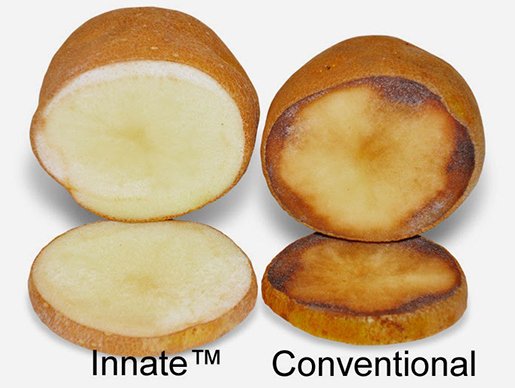 While the idea of creating a food which is said to produce less of a carcinogenic chemical is not a terrible one, it all comes back to this: what implications will this man-made creation have on human health, the environment, and the ecosystem as a whole? Will this GMO potato simply add to the already abundant negative effects GMOs have on the environment as a whole?

Simplot reassures the public that the method in which these potatoes are created aren’t nearly as ‘alarming’ or ‘aggressive’ as techniques used by other companies, such as Monsanto. There are no bacteria or genes from other plants used, only DNA from the potatoes themselves.

But we aren’t convinced that tampering with mother nature in such a way is a good idea. Doug Gurian-Sherman, a plant pathologist and senior scientist at the Center for Food Safety, told the New York Times:

“We think this is a really premature approval of a technology that is not being adequately regulated.”

The organization says that the RNA interference technique used for Innate is untested, and said that one of the substances suppressed by it actually plays an important role in the chemical make-up of the potato and its ability to fight pests. Will these potatoes lead to a further increase in the already 800 million pounds of pesticides sprayed on our food – pesticides which can’t be washed off?

As expected, the Center for Food Safety says that it plans to appeal the USDA approval. So maybe we’ll see a reversal.

Where the GMO ‘Innate’ Potato Will Likely be Served

Simplot plans to use the new genetically modified creation’s benefits to target the market from multiple points. For both the public and restaurants alike, the increased life of these potatoes will be a big sell. What’s more, the spuds will be sold as a healthier alternative, and will also be supplied pre-cut to supermarkets and restaurants, due to the fact that they remain pristine-looking for longer.

Because of these touted benefits, the vast majority of restaurants across the United States will likely source their potatoes from Simplot. That is to say, just about every potato dish in restaurants will be made from GMO potatoes. This will likely be the case with supermarkets as well.

“This could be a game-changer for the industry!” boasted Kerwin Bradley, Simplot’s director of commercialization.

One place you can undoubtedly expect to find the Innate potatoes will be the mega fast food giant, McDonald’s. Simplot supplies more than half of McDonald’s potatoes in the U.S., and has been doing so for decades. So now in addition to the low quality, harmful ingredient-riddled food found at McDonald’s, the ever-so-popular french fries will likely all be made using GMO potatoes.

In light of this, the Food and Water Watch group is already sending a petition signed by over 100,000 people asking McDonald’s to ban all Innate potatoes. 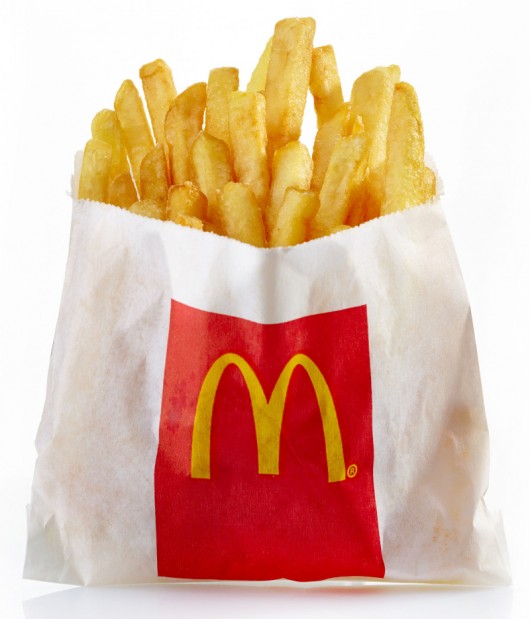 How to Avoid the New Genetically Modified Potato

So what do you need to do to avoid these creations? In addition to never eating food from McDonald’s and avoiding potato-based foods in restaurants, there are 3 primary ways you can bypass Innate GMO potatoes:

Will the new Innate potatoes make the top 10 worst GMO foods for your GMO foods list? Hopefully we won’t find out.