You have reached the cached page for https://www.prevention.com/food-nutrition/healthy-eating/a20440449/genetically-modified-potatoes-prevent-cancer/
Below is a snapshot of the Web page as it appeared on 4/9/2020 (the last time our crawler visited it). This is the version of the page that was used for ranking your search results. The page may have changed since we last cached it. To see what might have changed (without the highlights), go to the current page.
You searched for: british food scientists who studied gmo potatoes in texas 2017 images 2017 We have highlighted matching words that appear in the page below.
Bing is not responsible for the content of this page.
Could New Genetically Modified Potatoes Help Prevent Cancer? | Prevention
Today's Top Stories
1
Ashley Graham Shares Powerful Photo of Childbirth
2
Dwayne Johnson Honors His Daughters on Instagram
3
Reusable Grocery Bags to Save Le Planet
4
Reba’s Not Hosting the ACM Awards This Year
5
This Blind Audition on “The Voice” Was So Awkward 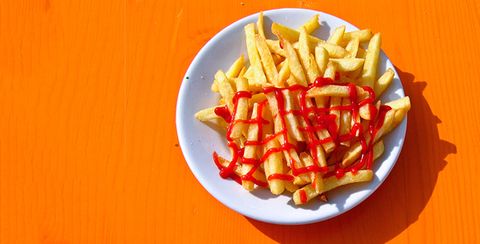 Let's lay it on the table: If genetically modifying a potato could lower your risk of getting cancer from luscious, ambrosial, deep-fried French fries, would you decide that maybe, this once, a little genetic meddling is A-OK?

That's the question now facing restaurants like McDonald's after the FDA approved a potato earlier this year that is genetically modified to resist bruising and produce lower levels of acrylamide, a potentially carcinogenic compound released when potatoes are fried.

The "Innate Potato," as it's happily been named, is the brainchild of Boise, Idaho-based J. R. Simplot, a major supplier of frozen French fries to McDonald's. To make the bruise-proof spud, engineers spliced genes from other potato species into a Russet Burbank potato using something called RNA interference technology, a process that the company says "makes it possible to enhance a potato plant's desirable traits without introducing foreign genes into the plant."

So are these frankenspuds safe for human consumption?

In a statement, Doug Gurian-Sherman, Ph.D., director of sustainable agriculture and senior scientist at the Center for Food Safety, said, "We simply don't know enough about RNA interference technology to determine whether GE [genetically engineered] crops developed with it are safe for people and the environment. If this is an attempt to give crop biotechnology a more benign face, all it has really done is expose the inadequacies of the U.S. regulation of GE crops."

But the Center for Science in the Public Interest (CSPI) has stated that reducing human exposure to acrylamide is a benefit regardless of the path used to get there. In an interview with NPR, Michael Jacobson, executive director of the CSPI said, "If we could have genetically engineered crops and foods that produce safer products and less expensive products, that's terrific!"

Jacobson's enthusiasm aside, the fact that McDonald's is scared of the spud is a tad alarming. The fast-food chain has publicly stated that it does not currently source GMO potatoes and has no plans to change that practice, perhaps due to increased consumer backlash against iunhealthy foods.

Some industry experts aren't surprised by McDonald's decision. "From a global perspective, most developed nations don't consider GMOs to be safe," says Megan Westgate, executive director of the Non-GMO Project, "Sixty-four countries actually require significant restrictions or outright bans on the production and sale of GMOs." She also adds that the technology used to modify the potatoes has unknown effects and has not been reliably tested.

So will the Innate Potato ever show up in restaurant fryers or store shelves? We don't know yet. But the FDA has endorsed the crop, along with a new non-bruising genetically modified apple aptly named the Arctic Apple, saying in a statement that both "are just as nutritious and safe as conventional apples and potatoes."

Arctic Apple, Innate Potato: If they sound more like comic-book heroes than agricultural advancements, maybe that's exactly the marketing feat these agro-engineering companies want to make: Super-produce can save us all—that is, until science finds out that the GM fruits and veggies have long-term health effects.

Advertisement - Continue Reading Below
More From Healthy Eating
Inside Kerry Washington’s Healthy Diet
Prevention's 2020 Healthy Food Awards Are Here!
Advertisement - Continue Reading Below
The Difference Between a Plant-Based & Vegan Diet
Here’s How to Safely Freeze Meat at Home
12 Fruits and Veggies That Last for Months
The Healthiest Foods for 40+ Gals
5 Questions on Vitamins and Supplements, Answered
What Is a Plant-Based Diet, Exactly?
Delicious Plant-Based Snacks That Keep You Full
30 Cancer-Fighting Foods That Taste Amazing