You have reached the cached page for https://www.amazon.com/Boogie-Nights-Original-Motion-Picture/dp/B000002UKO
Below is a snapshot of the Web page as it appeared on 12/31/2020 (the last time our crawler visited it). This is the version of the page that was used for ranking your search results. The page may have changed since we last cached it. To see what might have changed (without the highlights), go to the current page.
You searched for: boogie nights soundtrack We have highlighted matching words that appear in the page below.
Bing is not responsible for the content of this page.
Mark Wahlberg, The Emotions, Melanie, War with Eric Burdon, Marvin Gaye, The Commodores, Walter Egan, McFadden & Whitehead, Night Ranger, Various Artists - Boogie Nights: Music From The Original Motion Picture - Amazon.com Music 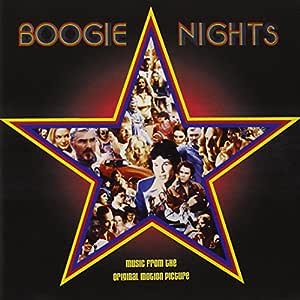 Save with Used - Good
$5.77
FREE Shipping on orders over $25.00 shipped by Amazon.
Arrives: Thursday, Jan 7
Ships from: Amazon
Sold by: Prime Goods Outlet

Patrick Warren Michael Penn Format: Audio CD
4.5 out of 5 stars 201 ratings
Amazon's Choice recommends highly rated and well-priced products.
Amazon's Choice for "boogie nights soundtrack cd"
See all 13 formats and editions Hide other formats and editions
Includes FREE MP3 version of this album.&nbspProvided by Amazon Digital Services LLC. Terms and Conditions. Does not apply to gift orders.&nbspComplete your purchase to save the MP3 version to your music library.
Available at a lower price from other sellers that may not offer free Prime shipping.

A three-note horn blast, a disco groove calling from the dance floor, a woman's voice charging in to sing "never, ever do I feel discouraged." It's the '70s again. You're surrounded by freedom at its most complete, and trivial. This is how Boogie Nights, a film about the rise and fall of a porn star, begins. The soundtrack consists of dance and trash pop songs playing non-stop, forming a kind of historical narrative behind the action. Vol. I rescues some great nuggets of fluff, both black and white--"Magnet and Steel" and "The Best of My Love," for example. Then, it deliberately goes too far with Night Ranger's "Sister Christian." The song, defiantly candy-ass, challenges our capacity to recycle the pop culture past. Its earnest emptiness and lack of irony make it the most uncool, and fascinating, thing on the record. --Steve Tignor

4.5 out of 5 stars
4.5 out of 5
201 global ratings
How are ratings calculated?
To calculate the overall star rating and percentage breakdown by star, we don’t use a simple average. Instead, our system considers things like how recent a review is and if the reviewer bought the item on Amazon. It also analyzes reviews to verify trustworthiness.
Top reviews

The movie’s music gave us 37 songs, almost 30 of them hits of the time, nearly wall-to-wall music even in a film with a 2:35 run time. With a soundtrack like that, BOOGIE NIGHTS should have generated a gatefold double album like the AMERICAN GRAFFITI soundtrack back in 1973. Sadly, it did not. This CD is the first of two volumes (no. 2 came out a year later), has only thirteen tracks, with two of them negligible tunes composed for the album.

Happily, there are any number of winners among the eleven time-specific hits here. This was an era (1975-1983) in which pop, folk, funkadelic and above all disco music got together, cross-pollinated, and took over the radio charts. Anderson managed to pull the AMERICAN GRAFFITI rabbit out of his hat by choosing songs that are generally exuberant, fun, and manage to comment on the action. The chipper confidence of the era is shown by choices like McFadden and Whitehead’s “Ain’t No Stopping Us Now” and the Emotions' “Best of My Love.”

The ambient sexuality of the era shows up clearly in such songs as Melanie’s “Brand New Key” and Walter Egan’s “Magnet and Steel” in which, you’ll notice, female and male “parts” are allegorized neatly as roller skates / keys, and magnet / steel. The Electric Light Orchestra’s “Livin’ Thing” found its way onto this CD, too, a happy high-tech opus of sex with its slippin’ and slidin’ and often referred to as “the only ELO song cool people can like.” (Also insanely danceable.) None of this is out of place in a movie where the happiest sex workers almost turned respectable.

In other words, the songs on this album, even if a touch cheesy at times, are really good cheese and perfectly emblematic of the Seventies and the BOOGIE NIGHTS. Four stars because again, this really, really should have been a double album (I’ll be reviewing vol. 2 shortly). The wretched graphic design of the album cover, in which arcane typefaces were shrunk down to CD size and rendered in all-caps Nouveau neon lettering on a black background, tempted me to give this product three stars. (But in the last analysis, the songs are just too much fun.) However, since there are no liner notes per se, fans who opt out for piecemeal downloads can be forgiven.

Cosgringo
1.0 out of 5 stars Poor press; I wanted to love this- well for my wife anyways....
Reviewed in the United States on November 19, 2018
Verified Purchase
So up late at night and hear this soundtrack and figured my wife would love it. She's into the dance disco phase still- lol.
I've been moving us back to vinyl- resurrected my old linear track with the rest of my system.
Ugh- the centered had rips/scratches in the center like a poorly laid sticker/label.
Get's worse! It had cracks and pops and I properly cleaned it and barely touched it with a brand new product from Amazon that does work well.
It must be a late belated barely cared for pressing. I so wanted this to be just even half-decent as a one off gift to my disco wife lol.
I cannot accept vinyl with a poor label with white scratches, and uneven record (God I hate watching the stylus go up and down), and poor quality. It seemed packaged properly and I see no reason for the fact the album was uneven and so much more.
It was to be a gift to lift my wife's spirits. I listened to it 2x. I should not even bothered when I saw the condition and not due to shipping.

Please folks- fix this up! I still want to buy this on vinyl mostly for my wife but still- just charge more else don't sell it.

Wulfstan
TOP 1000 REVIEWERVINE VOICE
5.0 out of 5 stars a great & fun selection for those who love classic Rock & Roll.
Reviewed in the United States on January 26, 2017
Verified Purchase
Surprisingly good, with oft heard classics like Got To Give It Up and Spill The Wine by Eric Burdon and War. And forgotten nostalgic faves like Brand New Key (Well, I got a brand new pair of roller skates, You got a brand new key...) and Magnet & Steel.

Sure, they are not all winners, but it's a great & fun selection for those who love classic Rock & Roll.
Read more
5 people found this helpful
Helpful
Report abuse

Ronald T. Prewoznik
5.0 out of 5 stars Love The music. . .
Reviewed in the United States on November 15, 2016
Verified Purchase
. . .Love the music. Every song you know and it's great to have them all in one place. Wish it was summer here in the great Midwest so I could drive with the top down and the music playing sooo loud.
Read more
6 people found this helpful
Helpful
Report abuse

Michael S.
1.0 out of 5 stars What happened to the hits?
Reviewed in the United States on October 23, 2019
Verified Purchase
Again the record company screwed up by not having the best songs of the 70s on this cd.
Read more
One person found this helpful
Helpful
Report abuse

Give it a second chance if you haven't.

Mr G.
5.0 out of 5 stars The music is great!
Reviewed in the United Kingdom on November 16, 2020
Verified Purchase
I enjoyed the film a lot and the soundtrack is fantastic! What else can I say... The music inspired me to become a DJ in 1979 and have enjoyed disco and pop music ever since. Some great tunes on this, specially Mr Bishops 'Fell in love' song which you don't hear that much on the radio these days.
Read more
Report abuse

tick tock
4.0 out of 5 stars great tunes from a great film
Reviewed in the United Kingdom on January 10, 2012
Verified Purchase
Every track a winner,bar the last one,which is a bit of a drag.Not ALL disco tunes,rather a snapshot of the tunes that were big at the time (late 70,s/early 80's)Try the actual film too.I am a bright,shining star................!
Read more
One person found this helpful
Report abuse

LW
1.0 out of 5 stars Such a quite CD
Reviewed in Canada on January 14, 2020
Verified Purchase
Being that my CD is unattainable. .I did not get the pleasure of hearing some of my old favorite tunes ..I was so looking foward to listening it ...or getting my real money back for a fake sale
Read more
Report abuse
See all reviews