You have reached the cached page for https://muppet.fandom.com/wiki/Bonnie_Erickson
Below is a snapshot of the Web page as it appeared on 1/18/2022 (the last time our crawler visited it). This is the version of the page that was used for ranking your search results. The page may have changed since we last cached it. To see what might have changed (without the highlights), go to the current page.
You searched for: bonnie erickson wikipedia death photos We have highlighted matching words that appear in the page below.
Bing is not responsible for the content of this page.
Bonnie Erickson | Muppet Wiki | Fandom

Bonnie Erickson (b. September 20, 1941), aka Bonnie Lewis, was part of the original design team for The Muppet Show. She first joined Jim Henson's team as a costume designer for The Frog Prince, became head of the workshop and continued to work with the Muppets team for many years.

Erickson is credited as the designer and builder of Miss Piggy, Statler and Waldorf, the Newsman, and the caricatures of Jim Henson, Frank Oz and Jerry Nelson for the Country Trio.

Erickson then moved to become Creative Director of the Product Division of Children's Television Workshop, a position which she held for 13 years.

Erickson now owns her own design and marketing company, Harrison/Erickson, Inc., where she creates characters for television and theater, as well as mascot programs for major league sports teams. Her best known mascots are the Phillie Phanatic and Youppi. Her advertising work includes the development of the first Happy Meal puppets for McDonald's as well as a line of plush animals for Applause. 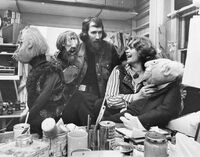 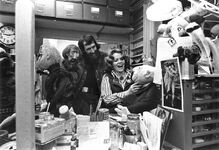 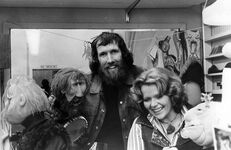