You have reached the cached page for https://www.thethings.com/these-16-photos-from-billie-eilishs-instagram-are-too-good-to-ignore/
Below is a snapshot of the Web page as it appeared on 5/2/2021 (the last time our crawler visited it). This is the version of the page that was used for ranking your search results. The page may have changed since we last cached it. To see what might have changed (without the highlights), go to the current page.
You searched for: billie diaz images on instagram photos We have highlighted matching words that appear in the page below.
Bing is not responsible for the content of this page.
These 16 Photos From Billie Eilish's Instagram Are Too Good To Ignore
By Andrea Oldereide Published Feb 28, 2020
Email

Billie Eilish's parents named her Billie Eilish Pirate Baird. She's an 18-year old singer who's really made the headlines over the past couple of years. This beautiful artist has been climbing up the music charts and may now be the most successful artist of our generation.

The 'Ocean Eyes' singer recently made history for being the youngest person to win five Grammys. This followed a succession of accolades, including two American Music Awards, two Guinness World Records, three MTV Music Awards and a Brit Award.

Her success is reflected by her social media fanbase. She has 55.2 million followers on Instagram. The James Bond theme singer has over 13 million likes on her most popular Instagram post. In this article, we will take a look at some of our favorite Billie Eilish Instagram photos.

It seems the ocean-eyed singer swapped her trademark Gucci uniform for a Louis Vuitton outfit. However, Billie did keep her signature camp look. Which old-time gangsters inspired this luxurious brand...and made Billie look so cool? This only proves that Billie has always been an out-of-the-box thinker.

15 That Time She Matched The Weather

every inch of my tar black soul

We simply can't get enough of Billie's laid-back style. The five-time Grammy-winning artist always wears a matching outfit and always amazes us with a bold, yet laid-back vibe. This time, Billie matched with the sky - what a fashion inspiration!

14 This Resting Unimpressed Faced, Even From Childhood

From the dog print with the word "fabulous" under it to the New York snapback, how could we not appreciate this "Baby Billie" look? The James Bond singer has always been so fashionable, and this photo is here to prove it!

13 Her Oceans Eyes Surrounded By Green

We have noticed Billie's recent obsession with the color green. But this picture takes her love for the lime color to a whole other level. Guess we can't have "too much" of a specific shade after all? Billie's not afraid to wear color, that's for sure.

12 This Old Feature With Khalid

Before the green phase, Billie loved her yellow one-piece. Most importantly, the 'Ocean Eyes' singer showed her appreciation for true talent from such a young age. This picture features the 18-year old with R'n'B singer, Khalid. It also shows the beginning of a great career.

We rarely see Billie wearing pink, never mind a baby pink outfit. But, for Teen Vogue, the talented musician let herself be styled in an entirely different outfit than what she would normally wear. This was completely worth it, as Billie looks absolutely gorgeous. It goes to show that the artist can really wear anything and still look amazing.

its not for me to say you love me

Now, this is the face we all recognize. Billie's 'bored' face is possibly one of her biggest trademarks. Although Billie has dedicated her legendary hit, 'Ocean Eyes', to another person, it is easy to imagine the song referring to her own eyes. This hypnotizing look would make anyone easily fall for these ocean eyes.

SHES ON THE MOON

Green, green and always more green. Billie sure loves to look like a neon light and we love it! This photo was taken in Salt Lake City and it is simply bad*ss. She looks like a robber...one that shouldn't be messed with.

It is a well-known fact that Billie Eilish is a huge fan of Justin Bieber, but did you know the Grammy-winning singer spent several years as a true "Belieber"? She shared this priceless childhood memory and proved that she was in fact, Justin's biggest fan. Would you even know this pic was of Billie if we didn't tell you?

MY BROTHER IS MY BESTFRIEND AND WE DID SNL LAST NIGHT AND IT WAS A PEAK LIFE EXPERIENCE. WOW. THANK YOU LIFE FOR GIVING ME WHAT I HAVE.

Billie shared one of the most memorable moments of her life. She brought her brother and they both performed on the legendary comic show, SNL. We also just have to appreciate Finneas' efforts to match with his sister. All in Gucci, of course.

This moment truly depicts how talented Billie is. She gets rewarded for her hard work and we know how deserving of these awards she is. The 'Bad Guy' singer has taken the music industry by storm, blending dark pop, EDM and many other music genres.

5 That Time She Appeared To Be Performing In The Stars

missing you tour... being home is boring

This picture is simply beautiful. It depicts a moment where Billie was performing at her concert, while her audience was holding up phones with the flashes on. This resulted in the musician appearing to be singing within the stars.

4 When She Shared This Happy Memory With T-Pain

An admirable quality we have noticed with the 18-year old artist is her way of appreciating other musicians. This picture of Billie and rapper T-Pain is proof that she is liked in the music industry, probably because she's so respectful of her colleagues.

3 When She Was Literally ROFLing

what you think we were laughing at? 😗 #buryafriend

We know Billie has a signature unbothered face, but we can't help but get the giggles at the sight of these cute pictures of the singer and her friend. They are both laughing. Fans are lucky to be able to follow their idol on social media and see different sides of the 'Everything I Wanted' singer.

THANK YOU FOR MAKING ME WHAT I AM

Justin Bieber isn't the only Canadian artist Billie admires. This heartwarming photo of the 'Ocean Eyes' singer and legendary 2000s rock star, Avril Lavigne, shows how much Billie appreciates Canadian music. We know the 'Lovely' singer is happy when she is sticking her tongue out for the photographers.

1 And Of Course, This Glorious Moment

FIVE ARE YOU KIDDING

How can this not be the most amazing picture shared by the popular artist? Billie brought five Grammys back home this year. She made history as she won what is known in the music industry as the "big four". The big four is best new artist, plus album of the year, song of the year and record of the year.

Next: Billie Eilish Silences The Haters By Quitting The Internet 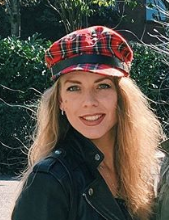 Andréa is a freelance writer and journalist based in London, UK. She has lived in Geneva most of her life in Geneva, Switzerland, but has also lived in Montréal, Canada. Andréa speaks Norwegian, French and English. She loves pop culture, writing about LGBTQ+ issues, and more. Andréa has experience working in different digital publications, radio, and PR agency. She loves to cover events and be in front of the camera, writing and creating content for social media.

Hailey Bieber & 9 Other Celebs Who Were Homeschooled

Jessica Simpson Was A Cheerleader (& 9 Other Facts About Her Childhood)

10 Celebs Who Are True Crime Junkies

10 Facts Everyone Forgets About Tara Reid

10 Celebrities Who Are No Longer In Taylor Swift’s Squad

10 Celebs Who Got Divorced Before The Age Of 30

10 Famous Women Leonardo DiCaprio Has Been Linked With

10 Celebs You Had No Idea Went To School Together

These Celebrity Couples Met On Set — But It Didn't Last

10 Feuds Between The Judges On 'The Voice' And 'American Idol'