You have reached the cached page for https://cleanfleetreport.com/better-place-israel/
Below is a snapshot of the Web page as it appeared on 10/8/2021 (the last time our crawler visited it). This is the version of the page that was used for ranking your search results. The page may have changed since we last cached it. To see what might have changed (without the highlights), go to the current page.
You searched for: better place electric cars israel jobs in miami We have highlighted matching words that appear in the page below.
Bing is not responsible for the content of this page.
Better Place and 100,000 Electric Cars for Israel | Clean Fleet Report Skip to content

The following is an excerpt from the book Save Gas, Save the Planet. Copyright ©John Addison. All rights reserved.

The Renault-Nissan Alliance and Better Place have signed an agreement to create a mass market for electric vehicles in Israel, an excellent target market for 5 reasons: (1) sales tax exceeds 60 percent for gasoline vehicles, (2) gasoline costs over $6 per gallon, (3) most driving distances fit the range of electric vehicles, (4) the nation does not want to be dependent on foreign oil, and (5) electric vehicles have strong government support.

Better Place plans to deploy a massive network of battery-charging spots. Driving range will no longer be an obstacle because customers will be able to plug their cars into charging units in any of the 500,000 charging spots in Israel. An on-board computer system will indicate to the driver the remaining power supply and the nearest charging spot. Nissan, through its joint venture with Japanese electronic giant NEC, has created a battery pack that meets the requirements of the electric vehicle and will produce it in mass volume.

As part of the solution, the Israeli government will provide tax incentives to customers, Renault will supply the electric vehicles, and Better Place will construct and operate an electric recharge grid across the entire country. Shai Agassi, CEO of Better Place, predicts that Israel will have over 100,000 electric vehicles in use by 2011. Although his forecast was not achieved in 2011, it is a realistic target. This will be 5 percent of the nation’s vehicle population. The number represents a significant step towards energy independence.

Denmark has agreed to a similar plan. Several United States cities are in early discussions with Better Place. For cities and nations that do not want to depend exclusively on a network of charging stations, Better Place offers an exciting alternative. Just as wireless service providers offer subscription plans with phones at discounted prices, Better Place partnerships may offer discounted electric vehicles with usage pricing plans. Annual use of an EV should be less than the average cost of $8,000 per year in the United States for using a gasoline-powered car.

Is Shai Agassi some idealist who is dreaming the impossible dream? Is he tilting at imaginary windmills? Hardly. Better Place has received over $200 million of venture capital investment. Agassi was a top executive at SAP, a corporation that became a global leader in enterprise software, successfully competing with giants Oracle and IBM.

Carlos Ghosn, CEO of Nissan and Renault, is noted for his financial discipline and corporate turnaround success. He is investing in the future. He sees some markets where his vehicles will be sold without batteries. The batteries will be leased by providers or where the entire electric vehicle will be part of a “subscription plan” such as Better Place.

A convergence of forces including unpredictable oil prices, improved batteries, congestion fees in major cities, and a growing middle class in Asia will cause the rapid expansion from 40 million electric vehicles to over 100 million globally. Today, these vehicles are predominately e-bikes and low-speed electric vehicles. By late 2010, however, you will be able to buy or lease a freeway-speed electric vehicle with a range exceeding 100 miles.

If you drive 10,000 miles per year, then you are only driving an average of 27 miles per day. In fact, 80 percent of the time, a United States driver does not exceed 40 miles in one day. Since most United States households have two vehicles, one of their cars could be powered only with electricity.

Yesterday, families and friends insisted that every vehicle be ready to go hundreds of miles on a moment’s notice and be big enough for the heaviest load of the year. Today, people realize that one vehicle can be used to travel 100 miles daily without needing a drop of gasoline. By the end of 2010, consider buying or leasing an electric car. 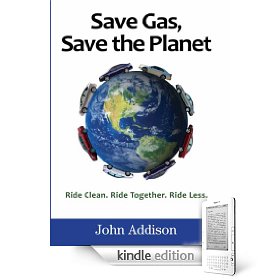 Get your discounted paperback or eBook copy of Save Gas, Save the Planet at Amazon. Gain a comprehensive understanding of electric cars, low-carbon fuels, and sustainable transportation.