You have reached the cached page for https://ukulelemad.com/baritone-ukulele/
Below is a snapshot of the Web page as it appeared on 1/18/2021 (the last time our crawler visited it). This is the version of the page that was used for ranking your search results. The page may have changed since we last cached it. To see what might have changed (without the highlights), go to the current page.
You searched for: baritone ukulele wikipedia We have highlighted matching words that appear in the page below.
Bing is not responsible for the content of this page.
Baritone ukulele, tuning, chords & fretboard layout. | Ukulelemad
Skip to content

Is the baritone ukulele harder to play than the soprano, concert or tenor?

The baritone ukulele is the largest of the four most popular sizes and is also tuned lower than the soprano, concert and tenor. The tuning is DGBE as opposed to GCEA. Because it’s larger than its counterparts it also has slightly larger fret spacings, which could mean a stretch to form some chord shapes if you have small hands. However if you are comfortable with the size and have never played a ukulele before, this could be the instrument for you. Being larger gives a lower, richer tone, more like the sound of a guitar. In fact the tuning is the same as the first four strings of a guitar, therefore the skills and knowledge you gain as you learn the baritone would help if you later decided to learn guitar. Likewise if you already play guitar and want to try ukulele, the baritone ukulele would be a natural choice.

For those that like the idea of playing the baritone but would rather stick to the GCEA tuning, it is possible to change the tuning or change the strings to achieve this. 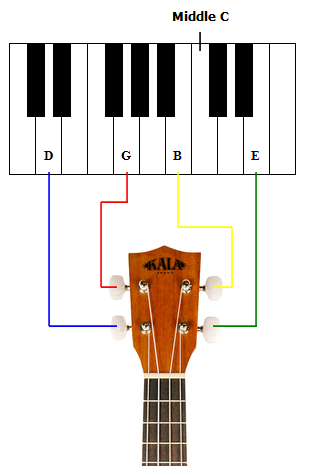 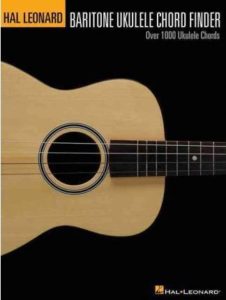 Very handy to have for for reference. This easy to use book contains over 1000 chord diagrams, and much more. A must for anyone learning the baritone ukulele. 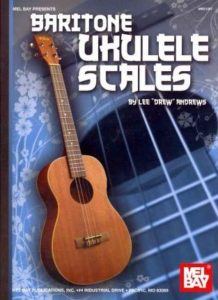 This book shows scales and modes for the baritone ukulele include Major, Minor, Harmonic Minor, Pentatonic, Dorian, Phrygian, and Mixolydian. Each scale is shown with fretboard diagrams.