You have reached the cached page for https://didthebrownswin.com/cleveland-browns/2021/05/22/any-comparison-to-1981-browns-baker-a-system-qb-how-about-jadeveon-clowney-hey-terry-3/
Below is a snapshot of the Web page as it appeared on 9/3/2021 (the last time our crawler visited it). This is the version of the page that was used for ranking your search results. The page may have changed since we last cached it. To see what might have changed (without the highlights), go to the current page.
You searched for: baker mayfield and jadeveon clowney vs khalil mack highlights We have highlighted matching words that appear in the page below.
Bing is not responsible for the content of this page.
Any comparison to 1981 Browns? Baker a ‘system QB’? How about Jadeveon Clowney? Hey, Terry – Did The Browns Win
Skip to content 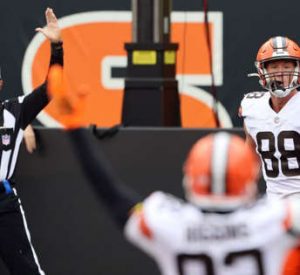 
Hey, Terry: The hype this year reminds me of the expectations in 1981 when the wheels fell off after losing to Oakland in the playoffs. How do they find the same mindset as they had last year? – Tom Jump


That said, you can point to the 2020 Browns being 7-2 in games decided by a TD or less. Maybe I just want to avoid doom and gloom, but the team seemed more good than lucky in 2020. It was the other way around in 1980. The key will be the defense, which GM Andrew Berry has completely overhauled. That also sets up the next question.

© John Kuntz cleveland.com/John Kuntz, cleveland.com
Coach Kevin Stefanski and quarterback Baker Mayfield became more effective over the course of the season as they got to know each other.


Hey, Terry: How much impact do you think Jadeveon Clowney will have this season? Are his best days behind him? – Chris Ard

Hey, Chris: One guy doesn’t make a defense, but Clowney has been a target of the front office for two years. He played only eight games a year ago. He had zero sacks. That’s a problem. Analytics and some basic watching of games shows he’s good against the run. At times, he can pressure the QB.

Just because the Browns signed the guy, I can’t back off from my lukewarm feelings. The durability issue bothers me, although he missed only nine games between 2016-19.

In 2017-18 when he was healthy, Clowney and fellow defense end J.J. Watt terrorized QBs. Clowney registered nine sacks each season. Can that happen here playing across the line from Myles Garrett? Perhaps. The Browns did add other linemen. But a big comeback from Clowney (who’s on a one-year contract) could be the biggest boost to the defense.

Other than Garrett and Denzel Ward, none of the defensive starters are back. They are the only two players in the top 10 of snaps played in 2020 who are back. That means there probably will be a major adjustment early on that side of the ball.


Hey, Terry: I grew up a Browns fan in Youngstown in the 1970s. So many disappointments … why EXACTLY is this year different? – Michele George Kuhrt

Hey, Michele: I see the Browns entering into an era like the late 1980s with Bernie Kosar, Marty Schottenheimer & Company. I can hear some fans moaning, “Not that again!”

They were good teams, legitimate contenders to make the Super Bowl. They were well-coached and disciplined. They had a rising young QB. Sometimes, luck comes into play when falling just short of a title.

These Browns have a front office/coaching staff working together. They also came in together and knew each other before. Baker Mayfield may not approach Kosar status, but he can come close. They will be fun to watch. They have good guys. The 2020 season didn’t feel like a fluke.

As for the Super Bowl, who knows? But these guys are worthy of your attention.

Hey, Terry: There seems to be chatter about Baker Mayfield being a system QB. Is this as silly as it sounds? Lamar Jackson is the most unique QB in the NFL now. – David King

Hey, David: Part of good coaching is putting the right QB in the right system. You mentioned Lamar Jackson, who is the best example. Tennessee found a system to fit Ryan Tannehill. Now he’s a top 10 QB after being mediocre in Miami.

Kevin Stefanski has designed an offense to fit Baker, and he kept adjusting it during the season. What we know is Baker is 23-22 as a starter. He took them to the playoffs. He can win games and get the team to the postseason. That’s more than a system QB, so I’m with you that it’s silly.

Hey, Marty: Part of what makes coaches great over a long period of time is their ability to adjust. I have recently interviewed players from the late 1980s who were coached by Schottenheimer. They respect and liked the man. Reggie Langhorne told me how Schottenheimer knew when to be tough with him.

I’ll soon be doing a story on Kevin Mack, and it was the opposite of how Schottenheimer treated Langhorne. The coach saw Mack lacked confidence and feared he’d be cut. Schottenheimer worked at praising Mack. So I believe Schottenheimer and Benedictine product Noll would figure out today’s game and be successful.

Hey, Ed: This could be a surprise – Harrison Bryant. He could end up with more playing time, especially if David Njoku is traded. That could happen. He had an up and down rookie year, but has the talent to be effective in the two tight end system the Browns use.

The obvious answer is safety Grant Delpit, who was set to start in 2020 only to be sidelined by a season-ending Achilles injury in training camp. The door is wide open for him. The coaches like linebacker Jacob Phillips. If the Browns have injury issues at receivers, Donovan Peoples-Jones can make an impact. I went with Harrison as a long shot, but others are intriguing.

Terry’s Talkin’ Browns: Draft is over, so how does it look?

What’s next for Koby Altman? Hey Terry on Cavs

Let’s talk about what the Tribe does have

Hey, Terry: What about Aaron Rodgers? Odell or Jarvis?

5 Fantasy Football Busts At Quarterback In 2021

New bodies on the D-line? Several players have emerged from the pack

Browns protection will be ‘fast, aggressive’ and ‘not really worry’ about opponent

3 gamers to look at in preseason finale