You have reached the cached page for https://www.amazon.com/Angels-Crest/dp/B000UU6XQU
Below is a snapshot of the Web page as it appeared on 4/26/2020 (the last time our crawler visited it). This is the version of the page that was used for ranking your search results. The page may have changed since we last cached it. To see what might have changed (without the highlights), go to the current page.
You searched for: angels crest movie We have highlighted matching words that appear in the page below.
Bing is not responsible for the content of this page.
Amazon.com: Angels Crest: Movies & TV 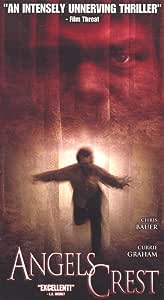 4.5 out of 5 stars
4.5 out of 5
4 customer ratings
How does Amazon calculate star ratings?
Amazon calculates a product’s star ratings based on a machine learned model instead of a raw data average. The model takes into account factors including the age of a rating, whether the ratings are from verified purchasers, and factors that establish reviewer trustworthiness.
Top Reviews

WEVTop Contributor: Photography
4.0 out of 5 stars Interesting and different
Reviewed in the United States on March 2, 2012
Verified Purchase
I saw this a couple years ago and went looking for it because I thought it was pretty good and wanted to share it.

Hard to describe this movie without giving too much away, however unlike most recent movies it basically has 2 characters and takes place almost 100% in the woods, so no "sets" either and no real fancy special effects. Don't know what the budget was for it, but it could have been done on very little.

Like movies used to before all the fancy special effects, expensive elaborate sets, etc., it depends on a good story and good acting.

I enjoy some movies with eye-popping effects and all that but sometimes it is refreshing to see a well made film that depends on the basics of acting and writing.

It made me a fan of Chris Bauer, who can one minute be a chubby dork and the next minute a menacing madman.

It was still good the second time around.

Michael Butts
HALL OF FAME
5.0 out of 5 stars GRIPPING AND DISTURBING, WELL ACTED THRILLER
Reviewed in the United States on July 3, 2004
J. Michael Couto's ANGEL'S CREST is one dark, gripping, evocative and ultimately disturbing film.
We meet Teddy, a middle-aged, overweight human resources employee as he purchases donuts from Yummy Donuts. He has a tie on, and is obviously on his way to work. He picks up his carpool partner and friend of five years, Richard, who is waiting at the bus station. Seems that Teddy was supposed to be on a vacation day, and Richard's car has broken down, so he was going to catch the bus. But fate (are we sure?) steps in and Teddy decides to go into work and take his buddy along. They hear on the radio that the interstate is all clogged up so Richard recommends they take Angeles Crest Road, a detour into the city. Teddy obliges and then decides to stop off at a scenic overview, telling Richard they have plenty of time; he wants to show him the view and the woods. Next thing you know, Teddy whacks Richard in the head with a shovel he's obviously planted there, and Richard is tied to a tree, with Teddy telling him he has thirty six minutes to live. What in the world is going on, Richard wonders? Why is Teddy doing this?
ANGEL'S CREST offers no easy explanation, but once the viewer finds out Teddy's motivation, a dark and enigmatic ending is in the offing.
ANGELS CREST is ultimately a story of fate, friendship, and revenge. Couto uses a vibrant style of camerawork and an effective use of flashbacks to piece the story together. Chris Bauer as the seemingly demented Teddy is very good----he has that everyman look of middle class white male, and his belief in fate, and why he has been used as its instrument, gives us a portrait of a desperate man, who isn't sure of what his role is in this melodrama.
However, it is Currie Graham's devastatingly brilliant portrayal of Richard that brings this independent film to its ultimate high. Graham, also an average looking, almost handsome man is appalled at what his friend is doing to him. Graham controls his performance masterfully, but the viewer can sense an inner volcanic eruption only minutes away. While fighting Teddy with words and pleas, the viewer isn't sure what Richard's role is, but even when the truth is revealed, Graham's performance works its way into your mind like a vise.
ANGELS CREST is a two character movie, and in the wrong hands, could have been overwhelmingly pedestrian. Currie Graham however gives such a powerful portrait of man torn by grief, guilt; a loser with nowhere to go; that he elevates this film into a realm of independent mastery.
Read more
11 people found this helpful
Helpful
Comment Report abuse

Tin Tan
5.0 out of 5 stars "Clearing" the Air
Reviewed in the United States on April 11, 2006
I haven't seen The Clearing but, from everything I've read, film bears a striking resemblance to the low-budget Angels Crest- which pre-dates Clearing. Perhaps Redford and company bought the rights to Angels Crest? If my paranoid theory's true, this is another case of the El Mariachi/Desperado syndrome- a charming and original indie (Mariachi) followed by a bloated Hollywood remake. Anyway, I'm truly blessed to have discovered Angels Crest. The acting gives you the intensity of a theatrical experience, with the advantage of sharp editing and a pulse-pounding soundtrack. Those involved put every ounce of talent into making Angels Crest a potent experience.
Read more
4 people found this helpful
Helpful
Comment Report abuse

Cinematic Joe
5.0 out of 5 stars A masterful film of provocative proportion
Reviewed in the United States on August 24, 2005
In Angels Crest, J. Michael Couto shows what a talented AFI graduate can do on a minimalist budget; crafting a fine movie that seizes both audience and mainstream Hollywood's attention. Angels Crest essentially plays out within the confines of a 2 person play set to a single location - purposely dissecting each character and scene in a perverse, contorted tale of suspense. Mr. Couto brilliantly sets the characters against a backdrop which offers a pleasant, salient counterpoint, yet magnificently illustrative of the twisted and gnarled storyline. If you liked 'Misery' you will love this film. One hopes that Hollywood knocks on J. Michael Couto's door very soon.
Read more
2 people found this helpful
Helpful
Comment Report abuse
See all reviews from the United States