You have reached the cached page for https://www.amazon.com/Little-Night-Music-Stephen-Sondheim/dp/B002M2Z3Q0
Below is a snapshot of the Web page as it appeared on 2/8/2021 (the last time our crawler visited it). This is the version of the page that was used for ranking your search results. The page may have changed since we last cached it. To see what might have changed (without the highlights), go to the current page.
You searched for: amazon prime watch a little night music movie 1977 We have highlighted matching words that appear in the page below.
Bing is not responsible for the content of this page.
Stephen Sondheim - A Little Night Music - Amazon.com Music 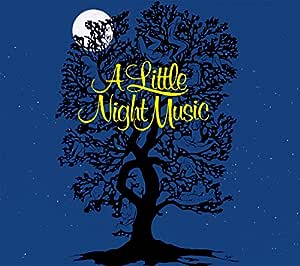 Sondheim stole Manhattan's heart with this 1973 romantic comedy. Along with Send in the Clowns , this reissue features the previously unreleased Night Waltz II and one bonus track: The Glamorous Life .

4.6 out of 5 stars
4.6 out of 5
71 global ratings
How are ratings calculated?
To calculate the overall star rating and percentage breakdown by star, we don’t use a simple average. Instead, our system considers things like how recent a review is and if the reviewer bought the item on Amazon. It also analyzes reviews to verify trustworthiness.
Top reviews

James Morris
TOP 500 REVIEWER
5.0 out of 5 stars Lilting, Charming Score Improves With Age!
Reviewed in the United States on October 27, 2014
Verified Purchase
Believe it or not, I purchased the 2009 issue of this CD classic just to get one previously unissued track that did not appear on the original CD. Although I realize that that song - Night Waltz II, The Sun Sits Low - is included on the CD release of the (2009) New York revival, I so loved the original cast of A Little Night Music that I had to have it. You may ask what inspires such devotion to a cast album, especially when I also own the Original London Cast, the DVD of the (admittedly dreadful) film adaptation and a cherished VHS of the Lincoln Center production. I'll tell you.

In 1973, I was 19 years old and madly in love with the Broadway theatre. Between 1971 and 1975, I saw nearly every production which opened on Broadway, both musical and non-musical, and I have seen more than my share of Broadway shows since then. I became familiar with the work of Stephen Sondheim at the age of six when I discovered West Side Story and later, even more enraptured with the score of Gypsy. I saw Company (1970) three times and Follies (1971), three times, including both of their closing nights. As for Night Music, I was there for the last preview (the night before the official opening) and then saw the show eight more times, including one of the most memorable closing nights I can recall. While not exactly my all-time favorite musical (the original production of Follies holds that honor), A Little Night Music has a very special place in my heart. Based on Ingmar Bergman's comedy Smiles of a Summer Night, A Little Night Music is a delight from start to finish. Set in Sweden at the turn of the century, the score is written in ¾ time. Despite the pastiche style written entirely in waltz, the score includes Sondheim's signature rapid, witty rhymes and boasts his most successful song, Send in the Clowns. While essentially a bedroom farce, the piece manages to be funny, charming, intelligent, witty and oh-so touching at the same time. I have never seen a bad production of it, and I can't imagine that I ever will.

The original 1973 vinyl cast album included a complete libretto, and I quickly learned most of the words to almost all of the songs. Forty-one years later, I can still sing "Now" completely from memory, not a small accomplishment in light of Sondheim's clever and complicated lyrics. How well I remember the glowing New York Times review of the opening - "Good God! An adult musical!" raved Clive Barnes, who seemed to be making up for the fact that he had previously panned both Company and Follies. My own reaction was that A Little Night Music was Sondheim's most commercial effort up to that point, in light of the fact that both the score and the story were far more traditional than any of his previous works. Mind you, this was before Pacific Overtures, Sweeney Todd, Into the Woods, Assassins, etc. broke even newer ground. In case you haven't realized it by now, I have never seen a show by Stephen Sondheim that I didn't like.

Whether you have loved this score since it was new or are just coming to know it, the original cast album is a shining example of what I consider the Golden Age of the Broadway musical. Highly recommended.

Elizabeth Bellamy
5.0 out of 5 stars wonderful lyrics
Reviewed in the United States on June 15, 2017
Verified Purchase
I have purchased a ticket to see A Little Night Music. I bought the disc to familiarize myself prior to the performance. It's lovely, witty and charming and a wee bit bawdy. Stephen Sondheim is a genius. I read several of the previous Amazon reviews, and am very happy I bought this disc.
Read more
2 people found this helpful
Helpful
Report abuse

Susan Gallen
5.0 out of 5 stars Wonderful Sondheim
Reviewed in the United States on June 21, 2016
Verified Purchase
This is the original Broadway cast and a wonderful recording! Arrived in great shape and on time.
Read more
2 people found this helpful
Helpful
Report abuse

David T. Anderson
5.0 out of 5 stars delightful recording
Reviewed in the United States on March 13, 2019
Verified Purchase
the clarity of sound make this a welcome addition to my collection
Read more
Helpful
Report abuse

Execelsior
4.0 out of 5 stars How thing change
Reviewed in the United States on September 22, 2013
Verified Purchase
I remember seeing this show on Broadway back in the early 1970s and thinking that it was the most boring musical I had ever seen. The music was dull and the production, beyond boring. I only went as I was a fan of Glynis Johns. Fast forward. Over the years, I have learned to appreciate this production and now believe that it was the best ........ ever. It really takes an actress to pull off 'Send in the Clowns' - Judy Dench did it well while most others did not - however, there is no question, Glynis Johns was the best. After many years, I have added this CD to my collection. I only recommend it to those that know the musical.
Read more
Helpful
Report abuse

Ellen T.
5.0 out of 5 stars Fantastic recording of a great show.
Reviewed in the United States on June 1, 2013
Verified Purchase
I love this CD! The music and voices are simply beautiful on this recording. Sondheim pairs clever lyrics and drama with lush waltzes. Two of my favorites, "A Weekend in the Country" and "Liaisons" are such fun that I can help myself from singing along!
There seems to be some who feel that Sondheim music is too cerebral to just enjoy. I disagree. I think his music can be enjoyed by everyone. I even caught my husband (who is definitely not a musical theater fan) whistling this music.
Read more
One person found this helpful
Helpful
Report abuse
See all reviews

E M
5.0 out of 5 stars It's sublime
Reviewed in the United Kingdom on June 4, 2010
Verified Purchase
If you like Sondheim, you'll love this. If you're new to Sondheim, and have only seen the film of Sweeney Todd for example, you need to listen to this one next. (Sadly, the film of this is reportedly not very good; but the music is so beautiful all you need is this CD). This is the "original" cast - Len Cariou, Hermione Gingold et al., and for me it's the best recording available. These are melodies so lovely you'll find it impossible not to walk around singing them for days and days... Anyone who likes musicals has to own a copy of this - a really superb score, and you've simply got to have it in your collection.
Read more
9 people found this helpful
Report abuse

Kindle Customer
5.0 out of 5 stars Put this on and stretch out on the sofa!
Reviewed in the United Kingdom on May 4, 2015
Verified Purchase
I love Sondheim's "A Little Night Music" and this is an excellent cast recording of it. I also have the English cast recording which I may slightly prefer to this one ... but I haven't decided yet. I reckon I will have to listen to them back to back a few more times. If only all chores were so sublime!
Read more
One person found this helpful
Report abuse

Always lipstick
3.0 out of 5 stars Cardboard case
Reviewed in the United Kingdom on October 14, 2018
Verified Purchase
Bought as a gift for my mum but overall rather disappointed. Compared to many other CDs I felt it was pricy and was surprised to find it in a cardboard case, shrink wrapped when I received it. Bit of a shabby birthday gift.
Read more
Report abuse

Frank E. Turley
3.0 out of 5 stars Three Stars
Reviewed in the United Kingdom on January 6, 2018
Verified Purchase
NOT QUITE WHAT I EXPECTED BUT WILL PERSEVERE, MAYBE IT GROWS ON YOU.
Read more
Report abuse

Madge
5.0 out of 5 stars Send in the Clowns - brilliant
Reviewed in the United Kingdom on April 26, 2013
Verified Purchase
I bought this mainly to hear Glynis Johns' original rendition of 'Send in the Clowns'. It was worth buying just for that.
Read more
4 people found this helpful
Report abuse
See all reviews

Page 1 of 1 Start overPage 1 of 1
Previous page
Next page
Pages with related products. See and discover other items: cast recording