You have reached the cached page for https://www.amazon.com/Dark-Shelby-Lynne-Allison-Moorer/dp/B071ZTXKDD
Below is a snapshot of the Web page as it appeared on 3/19/2021 (the last time our crawler visited it). This is the version of the page that was used for ranking your search results. The page may have changed since we last cached it. To see what might have changed (without the highlights), go to the current page.
You searched for: allison moore shelby lynn videos We have highlighted matching words that appear in the page below.
Bing is not responsible for the content of this page.
Shelby Lynne & Allison Moorer - Not Dark Yet - Amazon.com Music 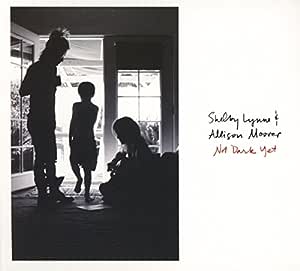 Secure transaction
Your transaction is secure
We work hard to protect your security and privacy. Our payment security system encrypts your information during transmission. We don’t share your credit card details with third-party sellers, and we don’t sell your information to others. Learn more
Details
Ships from
Amazon.com
Sold by
Amazon.com
Not Dark Yet has been added to your Cart

Shelby Lynne & Allison Moorer (Artist) Format: Audio CD
4.5 out of 5 stars 126 ratings
Amazon's Choice highlights highly rated, well-priced products available to ship immediately.
Amazon's Choice for "not dark yet"
See all 3 formats and editions Hide other formats and editions
Includes FREE MP3 version of this album.&nbspProvided by Amazon Digital Services LLC. Terms and Conditions. Does not apply to gift orders.&nbspComplete your purchase to save the MP3 version to your music library.
Available at a lower price from other sellers that may not offer free Prime shipping.

Not Dark Yet was recorded in Los Angeles in the summer of 2016. The album provides a potent look at the sisters' individual and collective artistry through eclectic song choices from writers ranging from the Louvin Brothers, Nick Cave, Kurt Cobain, and back to Jessie Colter. Shelby and Allison wrap their arms around the past, plant their feet in the present, and nod toward what's around the bend with a co-written Is It Too Much to close out the ten-song set.

4.5 out of 5 stars
4.5 out of 5
126 global ratings
How are ratings calculated?
To calculate the overall star rating and percentage breakdown by star, we don’t use a simple average. Instead, our system considers things like how recent a review is and if the reviewer bought the item on Amazon. It also analyzes reviews to verify trustworthiness.
Top reviews

Joseph Brotherton
5.0 out of 5 stars This record will take away your breath.
Reviewed in the United States on August 18, 2017
Verified Purchase
“No one else bears this heavy load / Bring it here to my side…Don’t you know you ain’t by yourself / I’m right here to help you lay it down.”

The quotation above is from "Is It Too Much", the closing song on "Not Dark Yet" the much anticipated new CD from Shelby Lynne and Allison Moorer. The record more than fulfills its promise, as you will realize long before the closing song.

The Moorer girls are each superbly talented and their collaboration magnifies and spotlights the artistry of each while transcending those talents and transporting the listener to a place of wonder and beauty.

The incisive production of the record by Teddy Thompson and the fabulous musicianship of the players complement the vocal instruments in a subtle yet effective manner while suggesting that each song could be performed with little or no accompaniment and still move hearts in a remarkable direction.

A lyric found in "Into My Arms" declares that "I don't believe in the existence of angels" and with that I heartily disagree. Proof of their existence exists in the songs on this record.

Buy this record and thank me for the tip!

Elizabeth Harper
5.0 out of 5 stars The Dream Album in Realty: Shelby and Allison blend their very souls.
Reviewed in the United States on November 5, 2017
Verified Purchase
I think every dedicated Shelby Lynne fan has dreamed of a Sisters album. And, it seemed like just a dream. This album is that dream realized and, amazing beyond words, it is BETTER than anything we could have imagined. Take two super talented sisters and blend them. It will probably be great. This is so much more. At times I did not know who was singing and then just the subtlest difference would reveal Shelby or Allison "Sissy". Close your eyes and visualize two one of a kind singers transforming their sounds into a cosmic dance of shared soul and tragedy allowing love to weave them back together again. This album takes my breathe away.
Read more
8 people found this helpful
Helpful
Report abuse

Sal Anastasio
5.0 out of 5 stars I loved it, especially how their voices mesh
Reviewed in the United States on August 24, 2017
Verified Purchase
I'm a fan of both of these ladies and was looking forward to this release. I loved it, especially how their voices mesh.. Great harmonies and a good choice of songs. .I'd love to see them record together again in the future. I only wish there were more songs on this cd. Great job ladies !
Read more
6 people found this helpful
Helpful
Report abuse

Hooha!
5.0 out of 5 stars Sisters doing it for themselves!
Reviewed in the United States on November 6, 2017
Verified Purchase
Sisters are killing it! What a record! The only song off is the one by Kurt Cobain. It just doesn't belong here but it might be perfect for another record. The Nick Cave song is by far the best thing here. I'd like to see the sisters do a whole album of songs by Leonard Cohen!
Read more
5 people found this helpful
Helpful
Report abuse

theMezMan
5.0 out of 5 stars Great collaboration between Allison Moorer & Shelby Lynn
Reviewed in the United States on May 15, 2019
Verified Purchase
This full-length release is great in so many ways. First it is possibly the first complete collaboration between Sisters Allison Moorer (who is one of my all-time favorite singer/songwriter/person/beauty) and her Sister Shelby Lynn. They sing together on every song, every song is excellent, their harmonies together work perfectly and are beautiful (it is sometimes hard to tell which one is singing the lead part), and the price is low ($7.99 for 10 MP3 Songs). This is one of the best albums that I have heard recently. Get it!
Read more
One person found this helpful
Helpful
Report abuse

Foothiller16
5.0 out of 5 stars Hard to beat these two together!
Reviewed in the United States on August 31, 2017
Verified Purchase
This a really fine cd! Shelby and Allison work exceptionally well, together. Their voices meld together and compliment each other. Listened once and thought, this is okay. Listened again and thought this is pretty good. The thirdtime resulted in "this is really fine!"
Read more
2 people found this helpful
Helpful
Report abuse
See all reviews

Andrew Cranmer
4.0 out of 5 stars A great album from highly talented siblings
Reviewed in the United Kingdom on January 12, 2018
Verified Purchase
In my view, Allison Moorer and Shelby Lynne are two of the finest singers around and, being sisters, it's high time they produced an album together. It certainly doesn't disappoint. Almsot all covers, but when they are from the likes of Jessi Colter, Nick Cave, Merle Haggard, Jason Isabell/Amanda Shires and Kurt Cobain that's not really a negative.

I thought the first two tracks are the weakest, with the album really coming alive with the title track and then continuing strongly.

The interplay between the two sisters is a joy and the supporting musicians are simply superb. Perhaps it would have been too much to ask to have Amanda Shires bringing her violin and vocals to The Color of a Cloudy Day, although that would have been something else.

A very fine album indeed, that grows on you the more you hear it. No, it's not groundbreaking and it's not the very best that either have produced, hence 4 rather than 5 stars, but mostly definitely worth buying.
Read more
4 people found this helpful
Report abuse

Iain P
5.0 out of 5 stars Stunning Covers
Reviewed in the United Kingdom on February 10, 2021
Verified Purchase
A truly stunning album of cover songs by two unique and gifted musicians who clearly love the emotional soul as well as the sound of the music they create.
Read more
Report abuse