You have reached the cached page for https://tvtropes.org/pmwiki/pmwiki.php/WesternAnimation/AdventuresOfSonicTheHedgehog
Below is a snapshot of the Web page as it appeared on 10/10/2021 (the last time our crawler visited it). This is the version of the page that was used for ranking your search results. The page may have changed since we last cached it. To see what might have changed (without the highlights), go to the current page.
You searched for: adventures in the sin bin movie watch free We have highlighted matching words that appear in the page below.
Bing is not responsible for the content of this page.
Adventures of Sonic the Hedgehog (Western Animation) - TV Tropes 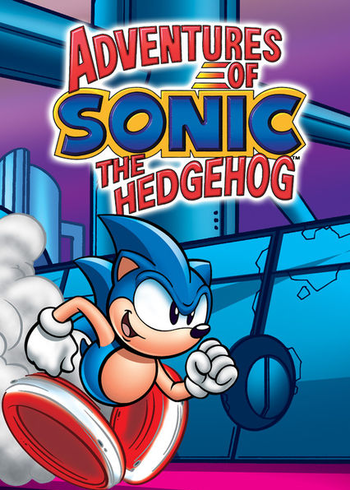 "I hate that hedgehog!"
— Dr. Robotnik in nearly every episode
Advertisement:

The One With… wacky hijinks, absurdities, and comical villains, like the well-remembered Dr. Robotnik. And "pingas".

Adventures of Sonic the Hedgehog is a syndicated 65-Episode Cartoon produced by DiC Entertainment, and is the first Animated Adaptation of the Sonic the Hedgehog series. It stars Sonic and Tails as they run around the planet Mobius while trying to foil Dr. Robotnik's plans. Meanwhile, Robotnik and his two (sometimes three) incredibly incompetent helpers, robots Scratch and Grounder (and sometimes Coconuts), try to Take Over the World.

The show deviates from the games a lot. Mostly, it's a humorous series with abstract art style, putting it in very stark contrast to the similarly named, but much darker and plot-heavy series that aired right alongside it on Saturday mornings: Sonic the Hedgehog, most often known as Sonic SatAM.note Ironically, the only reason that series existed was because DiC was pressured by ABC executives to come up with a replacement concept for a Sonic series. Adventures was DiC's first idea for it, and they even made a workprint of a pilot episode for the network, who ultimately rejected it. It does feature occasional nods to the games, however, including a mini-arc based around a series of Chaos Emeralds, many of Sonic 2's Zones recieving references, and multiple episodes which pay homage to the Tornado.

In addition to the aforementioned Sonic SatAM, this show is not to be confused with Sonic Underground, Sonic the Hedgehog: The Movie, Sonic X, Sonic Boom or the live-action film adaptation.

Now has a recap page.