You have reached the cached page for https://www.scmp.com/lifestyle/food-drink/article/3098689/3d-printed-food-how-pork-beef-potatoes-even-vegetables
Below is a snapshot of the Web page as it appeared on 8/26/2020 (the last time our crawler visited it). This is the version of the page that was used for ranking your search results. The page may have changed since we last cached it. To see what might have changed (without the highlights), go to the current page.
You searched for: Why are potatoes genetically modified? We have highlighted matching words that appear in the page below.
Bing is not responsible for the content of this page.
3D printed food: how pork, beef, potatoes, even vegetables personalised by machines can help people eat better | South China Morning Post 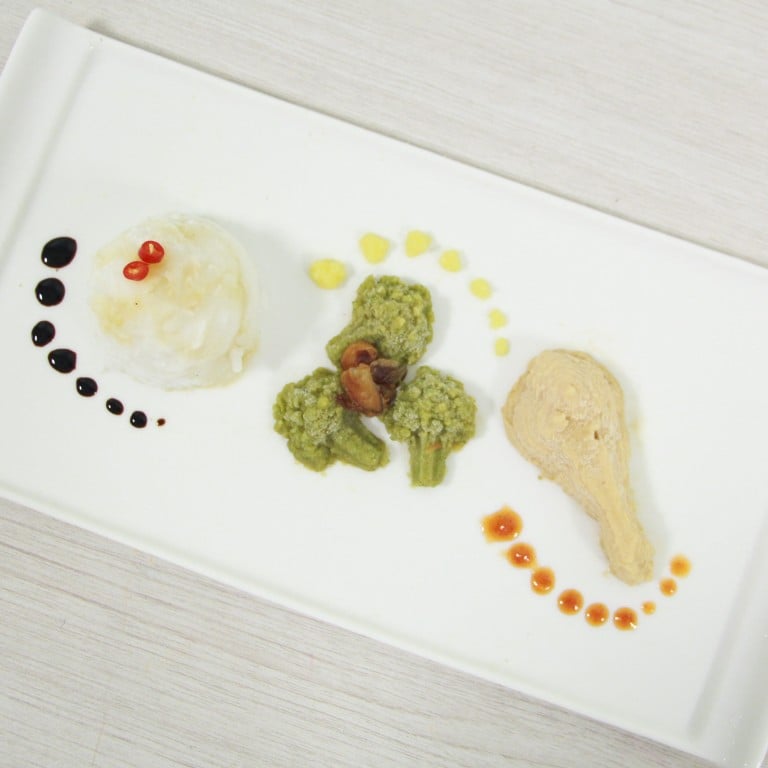 3D-printed meals that look and taste like the real thing are here, and they will help people who have difficulty chewing or swallowing solid food. Photo: SIT-Massey University
Lifestyle /  Food & Drink

Why you can trust SCMP
Link Copied 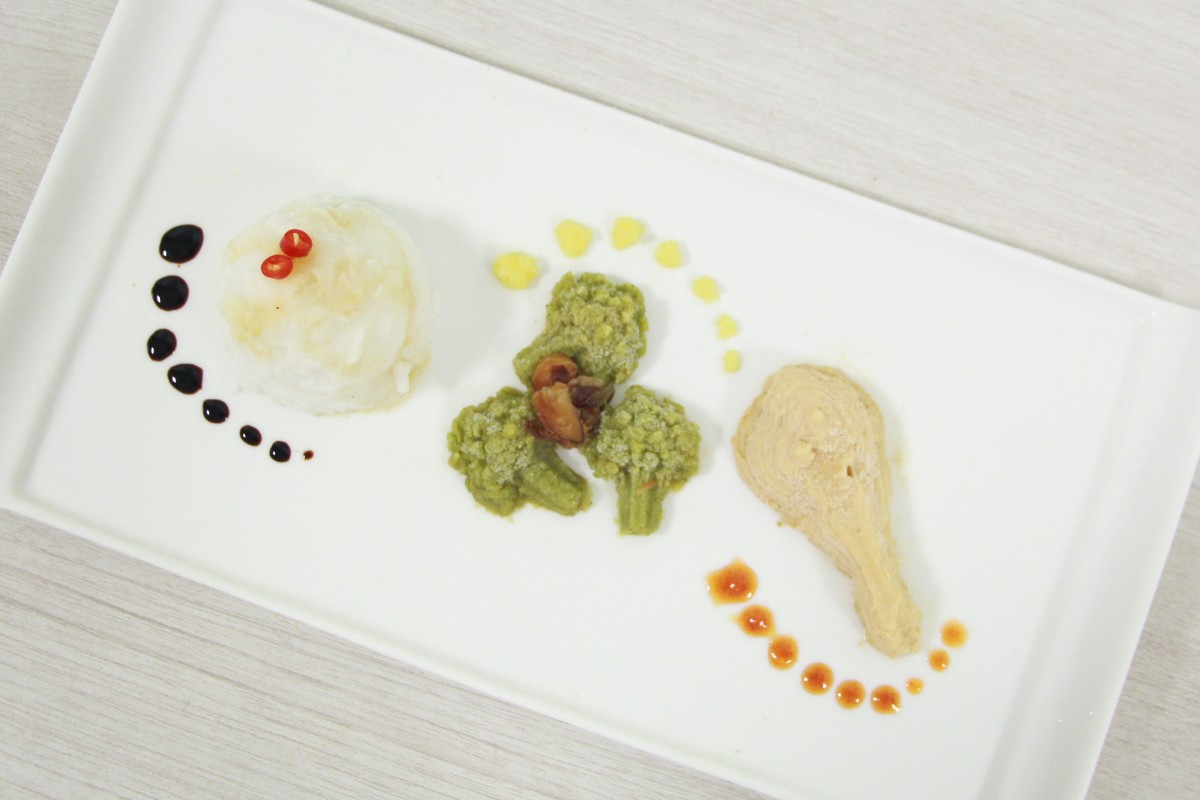 3D-printed meals that look and taste like the real thing are here, and they will help people who have difficulty chewing or swallowing solid food. Photo: SIT-Massey University

Broccoli, 3D-printed into unusual shapes to tempt a picky toddler. Beef stew, produced in the same way to make it easy to swallow for an elderly relative. Pork and potatoes, also rendered by a machine for a patient with oral cancer who can’t chew.

Advances in
3D-printing
mean printed food is becoming increasingly mainstream. It is deconstructed and modified for nutritional content and visual appeal, before being reconstructed as a meal.
The old and the unwell stand to benefit the most from this food revolution – experts say there is an urgent need to analyse the food and nutritional needs of
elderly people
, as the proportion of the world’s population over 65 is expected to grow from 25 per cent to 40 per cent by 2030.

“Difficulty swallowing and chewing, together with loss of appetite and changes in the perception of taste and smell, are important factors in the prevalence of malnutrition in the elderly,” says Berta Alvarez, director of research and development at Biozoon, a German company that produces 3D-printed food items.

Alvarez works on the creation of innovative foods with a modified texture – foods designed for the elderly and those with chewing and swallowing problems.

Apart from 3D-printed food being easier to swallow, the amounts of sugar, salt and fat can also be controlled. “The idea is that dishes such as pork with potatoes can be printed on a large scale, directly on a plate with 3D printers in nursing homes,” Alvarez says.

3D-printed meat with gnocchi. Apart from being easier to swallow, the amounts of sugar, salt and fat can also be controlled in 3D-printed food. Photo: Biozoon

Singapore’s Food Innovation and Resource Centre is providing food companies with technical expertise in developing new products and processes. The centre was launched in 2007 by Singapore Polytechnic and Enterprise Singapore, a government agency championing business development.

SCMP TODAY: INTL EDITION Newsletter
Get updates direct to your inbox
By registering, you agree to our T&C and Privacy Policy

Evelyn Ong, the centre’s senior project manager, says coming up with a tailored menu for every person with an eating difficulty is not easy, which is why her team is working on more general ways to solve the problem.

“3D food printing is the technology we are researching with the intent of addressing the problem of customisation of nutrition according to individual needs,” she says.

In 2019, Russian astronauts 3D-printed a steak aboard the International Space Station. Aleph Farms, an Israeli start-up that had been working on growing beef fillets in a lab for some time, was the food company behind the event. Cells are harvested from a cow and grown in a nutrient broth that simulates the environment in the animal’s body. The result is a thin piece of meat that mimics the texture and flavour of traditional beef.

Scientists packed the cells and broth into small jars and put them in a magnetic printer made by the Russian company Bioprinting Solutions on the spacecraft, ready to be printed by the astronauts when they were in space. The result returned, uneaten, to Earth on October 3.

In 2019, Russian astronauts 3D-printed a steak aboard the International Space Station. Photo: AFP

Anrich3D, a Singaporean start-up, is working on a project that takes into account individual nutritional preferences, where users can input their specific ingredient requirements and preferences via an app. The idea is to provide meals for people who want to be careful about what they eat, as well as to produce food that will encourage children to eat healthily.

Advertisement
Anirudh Agarwal, founder of Anrich3D, says some foods, such as leafy vegetables,
whole grains
and fruit, can be unappealing to children. They can be persuaded into eating these foods, he believes, if the food came in the shapes of their favourite characters or were used as part of a game.

“With enough shapes, we can create a narrative game where kids unlock new, more desirable shapes if they get enough points by finishing [their food],” he says, adding that children could also be asked to identify the ingredients and nutritional content of what they’re eating. The characters, ingredients and complexity of the game could be adjusted with daily feedback from the child, Agarwal says.

The founder of Anrich3D believes children can be persuaded to eat food they otherwise would not if it came in interesting shapes. Photo: Anrich3D
Some foods, such as leafy vegetables, whole grains and fruit, can be unappealing to children. Photo: Shutterstock
Personalised nutrition using 3D-printing can also be adapted to an individual’s medical history and dietary needs, he adds. Since 3D-printed food begins as a paste, overall
food waste
could be reduced. For example, machine-made meals could use ingredients that, though still edible, look unappealing and can’t be sold.

However, there are risks in using 3D technology to prepare meals, says Jose Encinas, an agronomist – someone who studies the ways plants can be grown and used to our advantage – who has worked at the United Nations’ Food and Agriculture Organisation for two decades.

If the consumer cannot see what is going into the prepared food, they might not believe the best ingredients are being used, he says.

“Presentation is fundamental”, as how food looks is just as important as how it tastes, he says. Also important is eating “fresh, local products without preservatives or additives” – which can’t be done with 3D-printed food.

An image showing the ratio of ingredients in a 3D-printed meal. Photo: Anrich3D
Jodi Koberinski, a food systems expert at Non-GMO Toronto – a group of organisations in Canada working to increase awareness around GMO (
genetically modified organism
) issues – says there is no need to unnecessarily process food.

“It assigns a lot of knowledge we don’t have and is laden with ethical issues,” she explains. “Diet … is not man-made in the sense of the hyper-individualism and disconnect that the 3D-food approach takes.”

One five-star-hotel chef in Bangkok in
Thailand
, who prefers to remain anonymous, says he sees little difference between using a 3D printer and a piping bag, beyond the fact that one is controlled by a computer and one by the human hand.

“For me, it’s just using a fancy, catchy term to promote a technique that is not new to cooking,” he says. “It just sounds better when you ‘3D’ print instead of just layering or making a terrine.”

For the moment, though, the large-scale production of 3D food is limited by various factors. Ong says there is a limit to the range of food textures that can be extruded and that can hold their shape for a period of time.

“This may pose challenges to the kitchen,” she says, adding that menus may need to be modified to take into account the capacity of 3D printers. This depends on the complexity of the form and the type of printer. Currently, it takes more than 15 minutes to 3D-print a drumlet, the upper part of a chicken wing, and about 10 minutes to print a small floret of broccoli. This capacity is likely to accelerate as 3D printers are further enhanced.

Despite the current limitations, Agarwal says he sees a world where there are “3D food printers in every office cafeteria, restaurant, hotel and fully automated vending machines everywhere, so that no matter where you are, or when, you can always get the best food from anywhere”.