You have reached the cached page for https://www.cultnews101.com/2021/11/groundbreaker-moira-penza-on.html
Below is a snapshot of the Web page as it appeared on 1/11/2022 (the last time our crawler visited it). This is the version of the page that was used for ranking your search results. The page may have changed since we last cached it. To see what might have changed (without the highlights), go to the current page.
You searched for: Who was the girl in the NXIVM group? We have highlighted matching words that appear in the page below.
Bing is not responsible for the content of this page.
Cult News 101 - CultNEWS101 Library: Groundbreaker: Moira Penza on Prosecuting NXIVM 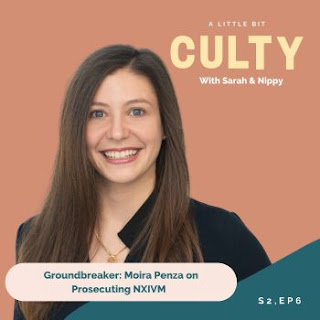 "If you watched “The Vow” or have followed the fall of NXIVM, you know Moira Kim Penza as the prosecutor who brought Keith Raniere to justice. Her accomplishments are mighty: Like Keith’s conviction on all counts including racketeering and sex trafficking and a brisk 120 year sentence. Moira’s groundbreaking approach to the case has been credited with paving the way for other sex trafficking prosecutions against powerful individuals. In other words: She’s a total badass. In this episode, Moira sits down with Sarah and Nippy to talk about what it’s like to take on a world-class dirtbag (our wording, not hers) and what really chaps her ass about NXIVM’s Voldemort.
More about today’s guest: Moira is now in private practice as a litigator, and a partner at Wilkinson Stekloff. Crain’s New York business named her in the 40 under 40 list, she’s been ranked as one of Bloomberg Law’s 40 under 40, and her legal analysis has been featured in The NY Times, CNN, ABC, NPR and Daily Beast."
Listen to Podcast