You have reached the cached page for https://www.gonomad.com/110605-four-dazzling-monasteries-in-southwest-germany
Below is a snapshot of the Web page as it appeared on 4/22/2021 (the last time our crawler visited it). This is the version of the page that was used for ranking your search results. The page may have changed since we last cached it. To see what might have changed (without the highlights), go to the current page.
You searched for: Who founded Wiblingen Abbey? We have highlighted matching words that appear in the page below.
Bing is not responsible for the content of this page.
Four Dazzling Monasteries In Southwest Germany - GoNOMAD Travel
Skip to content
Menu

Salem Palace, Maulbronn, Wiblingen & Alpirsbach are living works of art that tell the stories of history in Southwest Germany

Southwest Germany is blessed with a treasure trove of more than 60 old monasteries, palaces, and castles that you can visit and explore.  Come along and visit some of these dramatic monasteries, dating back centuries, that are all fascinating places to experience any time of the year.

The former Cistercian abbey at Salem is one of the most important cultural heritage sites in the Lake Constance region – and one of the most beautiful. Salem Monastery and Palace (Kloster und Schloss Salem) is a singular combination of Gothic solemnity and Baroque splendor.

Begun in 1285, Minster Salem is the third largest church built in Baden-Württemberg after Ulm and Freiburg. The monastery church, which was consecrated in 1414, had 300 monks and lay brothers. The whole interior grandeur of the late ministry years comes as a surprise to visitors.

The Largest Organ of its Time

The four-piece organ construction by Karl Joseph Riepp was created between 1766 and 1774. There were 134 stops and 7,680 pipes which sounded at the same time in all four organs!

The case of the Trinity Organ remains today, concealing a romantic organ dating back to 1901.

The large Trinity Organ is an exceptional gem that constantly captivates organists from all over the world.

You can hear the Salem organ during regular services, organ recitals and as part of the Salem Monastery Concerts.

A masterpiece by Daniel Meyer
The stove in the Summer Refectory dates back to 1733. It is a piece by Daniel Meyer of Steckborn on the Swiss banks of Lake Constance. Many generations of his family made stoves – as far back as the beginning of the 17the century, the Meyers were practicing the craft of stove fitting.

The stove, which sits in a painted alcove, has an octagonal structure which – just like a Baroque church roof – is crowned by a dome with a lantern. What makes the stove distinctive are the more than 30 painted tiles.

From the Life of the Cistercians

The paintings on the stove’s tiles are the work of artist Rudolf Kuhn, who was employed in the Meyer workshop. They depict day-to-day tasks in the monastery.

Monks in brown habits are depicted on a building site harvesting grapes, catching fish or in the kitchen.

Religion is deeply integrated into day-to-day life: the Mother of God appears to the brothers when they are concerned with harvesting corn in the fields. However, in reality, the priestly monks left this strenuous work to their lay brothers.

By public transport: during peak season, a special bus called Erlebnisbus, connects Salem Monastery and Palace with Salem train station (Mimmenhausen) and the harbor at Unteruhldingen, every hour between 11 am and 5 pm. www.erlebnisbus.de

One of Europe’s most complete and best preserved Medieval monastery complexes.

Maulbronn Monastery (Kloster Maulbronn) is one of Europe’s most complete and best-preserved Medieval monastery complexes. It combines a multitude of architectural styles, from Romanesque to late Gothic, in one place – creating a unique atmosphere.  The monastery is about an hour from the city of Speyer.

Maulbronn Monastery combines a multitude of architectural styles, from Romanesque to late Gothic, in one place – creating a unique atmosphere.

Visitors can tour the parts of the complex once used by the monks, and see what their lives were like. At Maulbronn, the monks lived side by side with the lay brothers, who left the praying to the monks and did the hard work of running the place.

Blogger Anne-Sophie Redisch, who publishes Sophies’ World, said that when she visited Maulbronn, she noticed old school graffiti carved into some of the walls, and was told by the guide that today it’s still tolerated as long as the writer carves it in the stone, like in the olden days.

“Within the medieval walls and towers, there’s a village square with the old half-timbered farmhouses and administrative buildings.

Today they serve as the town hall, a restaurant, a pharmacy, a bakery, a bookshop, the museum and visitor center and more.

Redisch said Maulbronn is a good place for a family visit: “Lots of hands-on activities that are sure to appeal to the whole family: medieval bookbinding, bread baking, and basket weaving, to name a few. There are secret doors and choir stalls which look straight out of Hogwarts. There’s swimming in the lakes and rivers, there are hiking trails, biking trails and even a wine trail.”

There is also a one-weekend long Christmas market at Maulbronn the first weekend of December!

The Maulbronn monastery complex has been preserved remarkably well and is an impressive representation of the region’s history and the Cistercians’ way of life.

Gary Arndt, of Everything-Everywhere, said this about Malbronn: “The most impressive thing about this monastic complex, and part of the reason why UNESCO recognized it as a World Heritage Site, is the fact that the building has been maintained.”

“Aside from the physical building that makes up the monastery complex, the cloistered life that this complex represents is also part of what has been preserved.

Hence, the Maulbronn Monastery Complex provides a detailed insight into the life and work of the Cisterian order from the 12th century until the 16th century.”

The Courtyard
The courtyard is another important feature in the Maulbronn Monastery Complex. This courtyard is surrounded by towers, living quarters, outbuildings, and a defensive wall.

The cloister, together with the portico and the refectory, has been around since the early 13th century. The oldest structure in the complex is the triple-naved basilica. It was consecrated in 1178. Meanwhile, the monks chancel consist of 92 seats for the 15th-century choir stalls.

It also serves as a concert venue, giving visitors the opportunity to appreciate the buildings’ out-of-the-ordinary acoustics. 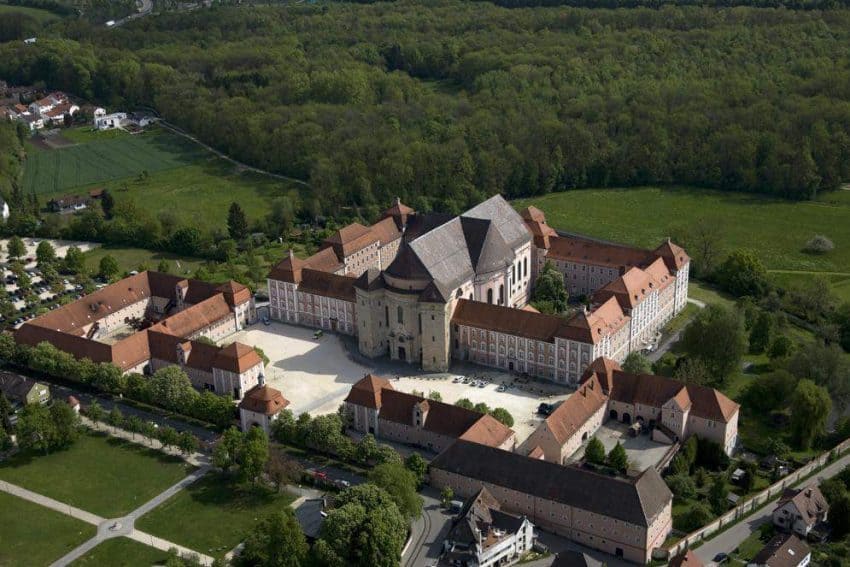 Wait until you see the library!

Wiblingen Abbey and its church represent the final masterpiece of Baroque architecture in Upper Swabia. The interior of the library is considered to be one of the finest examples of Rococo architecture you can find in Europe.

Wiblingen Abbey was a former Benedictine abbey which was later used as barracks. Today its buildings house several departments of the medical faculty of the University of Ulm.

Wiblingen was founded as an abbey in 1093, and during the 30-years war and survived though it suffered damage from the marauding Swedish Protestant troops.

A relic, a splinter of the holy cross obtained during the first crusade, was hidden and then lost after the war was over. It took decades to find it again, after all, it was a splinter!

Parking is for free. Photo permission costs extra: In addition to the entrance fee (5 Euro), you have to pay another 3 Euro for the permission to take photos in the library.

This palatial structure is certainly something to behold and is situated in a picturesque location on the Iller — a tributary of the Danube.

The library at Wiblingen has been listed in dozens of lists and proclaimed as one of the most stunning rooms you will ever enter.

You’ve got to see it in person!

The bus line 3 drives this route. You can get in at the main station (Hauptbahnhof) or Ehinger Tor. The bus has to display ´Wiblingen (Alte Siedlung), because the other #3 drives to the university. Plan a 10-15-minute-ride. The ticket costs ca. 2,20e, and you get a discount buying a daily- or group-ticket. From Pranger to the Klosterhof you`ll need a 5-minute-walk.

A Tour with free Beer and a gift!

Alpirsbach Monastery (Kloster Alpirsbach), in the northern Black Forest, was consecrated on 16 January 1095 by the Bishop of Constance, Gebhard III. Following the introduction of Protestantism in Württemberg, Duke Christoph dissolved the monastery in 1556.

Alpirsbach is alive with concerts and other events during the summer, and the old town, or Altstadt, has many beautiful half-timbered houses. It also has a Klosterbrau, a two-century-old brewery still making great local beer.

Alpirsbach was one of 13 monasteries in Württemberg that were converted into Evangelical boarding schools. A spectacular find from 1958 helps modern-day visitors to imagine everyday life in the school: Alpirsbach Klostermuseum (Monastery Museum) displays shoes, items of clothing, letters and even 16th-century schoolboys’ scribble on the wall – evidence that graffiti is nothing new.

The collection includes a pair of breeches that looks exactly like the garments depicted in paintings and drawings from the time of Albrecht Dürer – the only such surviving example worldwide.

Alpirsbach Monastery conveys a vivid impression of architecture, religion and school life over a period of almost a millennium.

Today, the former Benedictine abbey is an extraordinarily well-preserved example of the monastic architecture of followers of the Hirsau Reforms, which stressed discipline and asceticism.

The tours are mostly in German, with a handout in English.  The tours include a snack and two beers, which are brewed in Ulm.

By public transport: take the train line between Freudenstadt and Hausach,
and get off at Alpirsbach station.

Max Hartshorne has been the editor and publisher of GoNOMAD Travel in South Deerfield Mass since 2002. He worked for newspapers and other sales positions for 23 years until he finally got what he wanted and became the editor at GoNOMAD. He travels regularly, enjoys publishing new writers, and is proud to live a purposeful and productive life.

blogs.gonomad.com/readuponit
If this story has inspired you to travel, why not check out the prices to get there and make it happen? Search airfares, hotels, and rental cars here. Thanks!

Search for and Book Hotels

Visit our other sites