You have reached the cached page for https://usaartnews.com/art-market/national-gallery-best-paintings
Below is a snapshot of the Web page as it appeared on 10/20/2021 (the last time our crawler visited it). This is the version of the page that was used for ranking your search results. The page may have changed since we last cached it. To see what might have changed (without the highlights), go to the current page.
You searched for: Which is the most famous painting in the National Gallery? We have highlighted matching words that appear in the page below.
Bing is not responsible for the content of this page.
Most famous painting of the National Gallery | Top 10 works of National Gallery you must see | USA Art News
Sign in
Welcome!Log into your account
Forgot your password?
Password recovery
Recover your password
Wednesday, October 20, 2021
Sign in
Welcome! Log into your account
Forgot your password? Get help
Password recovery
Recover your password
A password will be e-mailed to you. The London National Gallery is a landmark place for all art lovers. It is impossible to pass by the London Gallery, at least because it is in the center of the British capital. Walking along Trafalgar Square, you will immediately see a large beautiful National Gallery building with a dome and columns (by the way, the facade is the only part of the museum that has remained unchanged since its foundation). And besides, you can see the statue of Admiral Nelson, the Church of St. Martin and beautiful fountains. The architecture of this area will definitely encourage you to take a closer look at the beautiful, one of the best galleries in the world. 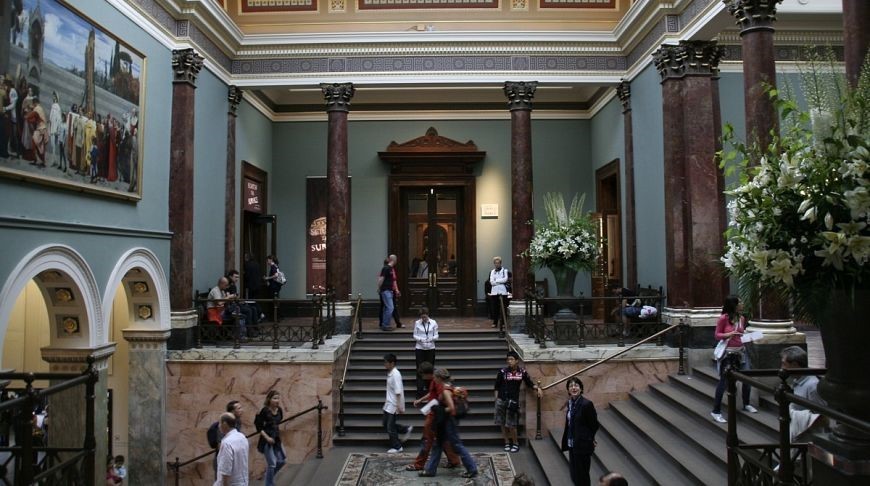 The London National Gallery is a landmark in the art world. More than 2300 paintings dated XVIII-XIX centuries are kept here, and in terms of the number of visitors the gallery is second only to the Louvre, British Museum and the Metropolitan Museum. During your visit to the gallery, you will have the opportunity to see how the trends in painting have changed over the centuries because all paintings here are presented in chronological order. 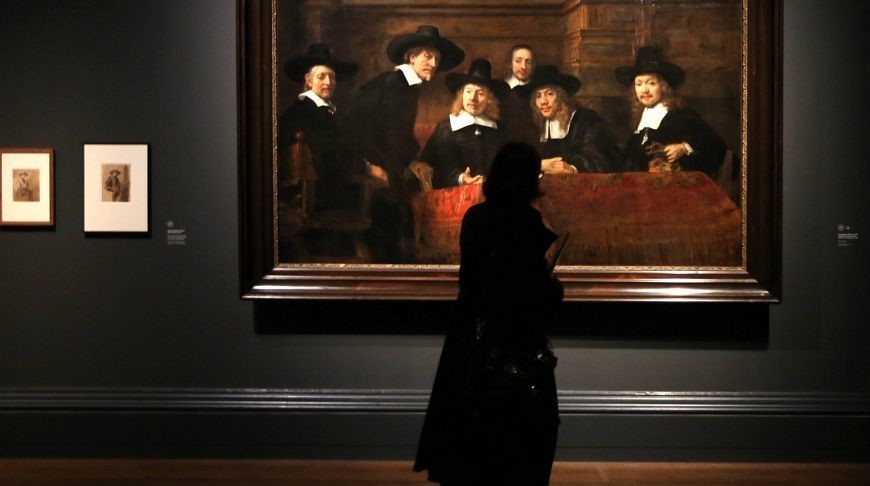 The National Gallery offers a lot of additional ways to learn something new and interesting about art: for example, you can order a personal lecture in the gallery, buy an audio guide or a printed brochure. The museum also offers to watch video lectures on YouTube channel. Among the most famous paintings of the gallery are works by Leonardo da Vinci, Raphael, Rembrandt, Claude Monet, Paul Cézanne, Pierre Renoir, Henri Rousseau, Van Gogh and many others. All of them are presented under one roof of the London Gallery, and anyone can see masterpieces of world art for free. In terms of volume, the collection of the museum of the British Empire capital is incommensurate with the Louvre or Hermitage. The British preferred quality over quantity. In the collection of about 2000 samples of Western European painting of XIII – early XX centuries, in other words – a catalog of masterpieces of fine art from Giotto to Picasso.

In Britain, as is known, the oldest constitutional monarchy in the world (since 1215). The formation of the National Gallery is indirectly related to monarchs. And, unlike most of its brethren – major European museums, has no royal collection at its core. Although the decision to buy the first collection, and laid the foundation of the museum – the collection of the banker John Julius Angerstein (38 paintings – 57 thousand pounds) was adopted by Parliament under the pressure of King George IV. Perhaps it was the best of what this little-sympathetic monarch did for England.
Since its founding in 1824, the museum’s collection has been replenished, one might say, on a voluntary basis, with gifts and donations. The good in a country like Great Britain was collecting a national hobby, it was not difficult. Today the gallery, as in the past centuries, lives off of rich sponsors. There is no entrance fee to the delight of many visitors.

Originally located in the Angerstein Mansion on Pall Mall Street, in the heart of London. Later, the gallery moved to Trafalgar Square. Here, between 1834 and 1838, a new building was built in the neoclassical style, a favorite of the British, designed by the architect William Wilkins. However, for some time, until 1869, she shared the premises with the Royal Academy of Arts.

All paintings in the National Gallery are exhibited in chronological order. Regardless of the artist’s nationality. It’s a bit unusual, but why not? The Gallery of London differs from most major European museums not only by the principle of placing the paintings but also by the fact that the collection is shown in its entirety (of course, except for paintings traveling through exhibitions). The London National Gallery is a rather conservative museum. It seems that the “newest” painting in the collection is post-Impressionist paintings by Cezanne and Van Gogh. The famous sunflowers of the latter can be seen here. Talking about the masterpieces of a gallery as London’s is very difficult. Again, almost every painting here is a masterpiece. But lets try.

The pearl of the Netherlands collection is the famous ‘The Arnolfini Portrait’ by Jan van Eyck, the inventor of the most common painting technique – oil painting.

‘The Arnolfini Portrait’by Jan van Eyck (there is a hypothesis that depicts the moment of the marriage of a young couple, but do not think anything bad silhouette bride’s dress just a tribute to the fashion of the time) and now shines incredibly clear, clean, bright, but harmonious colors. The painting of the Dutch master seems to be a magic mirror that reflects and preserves a piece of reality that the artist saw. The objects are painted in such detail that it is not surprising if the original is repeated down to the smallest scratches.

Now a little about the other pair.

“Venus and Mars” by Sandro Botticelli

Beautiful exquisite drawing and harmony of color are characteristic qualities of his works. The paintings of the master, painted on mythological subjects, are especially appreciated. After all, there are not many of them left. Some of the works the master himself burned, inspired by the sermons of the famous Florentine.

“Venus in front of the mirror” is one of Diego Velasquez’s finest works. The beautiful contours of the figure of the goddess of love and the intriguing, eternally elusive reflection of her face make the viewer return to this work again and again. In 1914, the painting was nearly destroyed, after an attack by the English suffragette Mary Richardson. But the restorer managed to save the painting of knife strokes.

In the London Gallery you will meet with the best artists of the English school: William Hogarth, Sir Thomas Lawrence, Thomas Gainsborough. Don’t miss the works of two geniuses of the English landscape school – John Constable and Joseph Mallord William Turner. Two eternal antagonists. One mesmerizes with the beauty of surprisingly precise details, the other with the irreconcilable struggle of the elements.

London Gallery – museum visit to which can be compared to taking a course in art history. Here you can see the best artists of the world, represented by the best of their works. The lack of entrance fees and weekends makes this place absolutely irresistible.

The London National Gallery gives visitors the opportunity not only to see famous paintings, but also to join in their creation. The museum regularly holds seminars and training sessions on drawing techniques for the whole family. Enroll your baby in one of the world’s best galleries and he or she may grow up to be a real artist. Besides permanent exhibitions, the gallery also offers temporary exhibitions. Paintings by famous artists (such as Francisco Goya) are exhibited in the National Gallery for several months, and tickets can be purchased within 8 pounds. In addition, the London Gallery will be of interest not only to connoisseurs of painting but also to fans of live music: there are regular performances of musicians. The gallery also provides visitors with an excellent lounge area where they can relax and think about art. There are an espresso bar and café where you can have a delicious snack, as well as a restaurant with an interior that perfectly matches its location – with many paintings on the walls and large windows. Travelers who prefer to leave all the famous places with souvenirs and the London Gallery will find something to their taste. The museum has a shop with a wide range of products: exclusive paintings, books and home furnishings inspired by world art. For example, you can buy a bag with a stylized fragment of Leonardo da Vinci’s “Madonna in the Rocks” or a pillow printed under Richard Parks Bonington’s painting La Ferte. The London Gallery plays an important role not only in the world of painting but also in cinema. Fans of the Skyfall film or the series “Sherlock” will probably recognize the London Gallery as the location where the shooting of their favorite paintings.

6 Ways for Students to Stay Motivated Without Burning Out

Getty Foundation Awarded $ 1.3 Million for the Preservation of Wupatki...

6 Ways for Students to Stay Motivated Without Burning Out

The Symbols Hidden On The Frescos Of The Sistine Chapel Are...

Helen - October 19, 2021 0
The governor ordered the removal of the state-owned statue in June 2020. A giant statue of Confederate Gen. Robert...