You have reached the cached page for https://604now.com/yvr-vancouver-airport-code/
Below is a snapshot of the Web page as it appeared on 12/27/2020 (the last time our crawler visited it). This is the version of the page that was used for ranking your search results. The page may have changed since we last cached it. To see what might have changed (without the highlights), go to the current page.
You searched for: What is Vancouver International Airport? We have highlighted matching words that appear in the page below.
Bing is not responsible for the content of this page.
What Should YVR Stand For? How Vancouver Airport Got Its Code ​
Skip to content
Culture 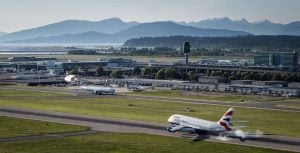 A recent study determined that Vancouver is the unhappiest city in Canada; however, YVR was named the best airport in North America for the ninth year in a row. This win makes it the first and only airport to receive the top accolade for nine years in a row.

So, even if people don’t enjoy being in the city, they certainly appreciate the experience of flying in and out of it.

What’s more, the airport is about to get even bigger, with a massive $9.1 billion expansion set to take place over two decades. Plans include building one of the largest GeoExchange systems in Canada and significant terminal expansions, as well as new parking options.

RELATED: Should Pets Be Allowed In the Passenger Cabins Of Planes?

While people generally enjoy the airport’s facilities, they don’t all know why its airport code is YVR. For one, some people don’t know why the letter first letter isn’t a V, but there is a reason behind that.

The Meaning of YVR

If you look at most of the major airports across Canada, most three letter codes begin with the letter Y. As such, this first letter doesn’t have so much to do with Vancouver as it does the nation at large.

From there, the abbreviation is less odd, and easy to understand. V is for Vancouver, and the R is the last letter of the word.

The International Air Transport Association, known by a more obvious abbreviation, IATA, determines  the three-letter codes for global cities. For this reason, it isn’t a code that Canada chose independently.

With that being said, Vancouver can be a sassy city, and residents enjoy drawing up their own ideas of what it stands for.

On Reddit, one user stated that it should stand for “You’re Visitng Raincouver.”  Another user described it as “YVR=Yearly Volumes of Rain (in a day).”

Of course, the rainy explanations are endless, but there’s myriad possibilities.

What do you think is a funny/clever/cheeky abbreviation for our aviation provider?

Sound off in the comments below!

Get more 604, delivered to your inbox

Plan your next night out, enter contests, and stay connected.