You have reached the cached page for https://www.intermap.com/blog/understanding-vertical-datums
Below is a snapshot of the Web page as it appeared on 11/19/2020 (the last time our crawler visited it). This is the version of the page that was used for ranking your search results. The page may have changed since we last cached it. To see what might have changed (without the highlights), go to the current page.
You searched for: What is NAVD elevation? We have highlighted matching words that appear in the page below.
Bing is not responsible for the content of this page.
Understanding Vertical Datums

Your world. made simple.

Denver is known as the mile-high city. Most people assume this altitude refers to the height above mean sea level. After all, where else would you measure your heights from? But this far inland, how does one relate measurements back to mean sea level? And just what is meant by mean sea level?

In places where you don’t have an ocean nearby, what do you use as the “zero elevation” from which to measure heights? In the mapping industry, whatever you use as your zero elevation is called your datum. In the case of Denver, the “official” datum is the benchmark on the steps of the State Capitol building.

In addition to measuring from a physical benchmark, elevations can also be measured using Earth-based geoids or ellipsoids. Before continuing, let’s elaborate on terms commonly used in the elevation mapping industry.

Datum: Datums are fixed reference points. They can reference elevation points on the actual topographic surface of the Earth, or on geoid/ellipsoid representations. A geodetic datum is a model of the Earth used to calculate coordinates on a map.

Topographic Surface: This is the visible surface of the Earth1. 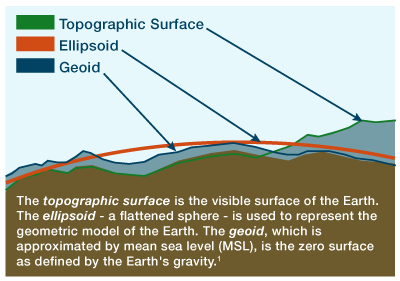 Survey Benchmarks: Over the past 100 years, about 740,000 “benchmarks” were placed by the US Geological Survey (now known as the National Geodetic Survey) on the Earth’s topographic surface. You may have seen such “datums” without knowing what you were looking at. 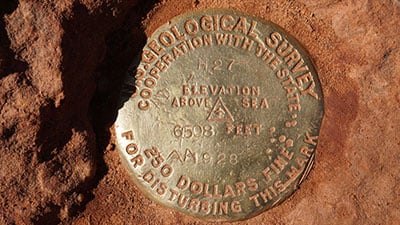 Geoid: A geoid is the “average” level of the sea, defined by the Earth’s gravity field, and disregards tide, winds or currents. Geoid-based heights are often referred to interchangeably as mean sea level heights. In reality, however, the geoid must be determined by using local gravity measurements and applying complex physical models. Thus, in the figure above, we see that the Earth’s geoid is not smooth.

Although the concept of the geoid has been around for over 150 years, we’ve only recently had the technology to allow measuring the geoid to millimeter-level precision. As technology improves, geoid models are refined and replaced with newer and more accurate ones. Further, the geoid itself changes over time as a result of geophysical activity, such as post-glacial rebound and mass balances within the Earth.

Ellipsoid: An ellipsoid, in mapping terms, is a simpler, purely mathematical surface that is a “best fit” for the geoid. With just a small handful of parameters, an ellipsoid-based datum can be perfectly identified for the entire earth. Approximating the geoid with a reference ellipsoid simplifies computations and enables efficient cartographic projections. Most GPS technology provides elevations measured from a reference ellipsoid.

Elevation can be determined using any zero reference, or vertical datum, as a starting point. For generations, that zero reference was a sea-level benchmark located at the Pointe-au-Père Lighthouse in Quebec for elevations in North America, also known as the International Great Lakes Datum. All other survey benchmarks in the United States cascade from this original point. Sea level is nearly always considered locally, however, so there are similar zero reference points located throughout the world.

Today, our reference point is still located at Pointe-au-Père but global positioning satellites (GPS) provide far more accurate geodetic measurements, and with greater efficiency. GPS heights are computed relative to a simple ellipsoidal model of the Earth, and are called ellipsoidal heights. However, these elevations can be off by as much as 350 feet in parts of the world.

For this reason, and because those heights above sea level we typically use (also known as orthometric height) are based on the Earth’s gravity field, we apply what is known as the “geoid height” to identify the difference between the ellipsoidal and orthometric heights. Geoid heights let us accurately relate the heights from GPS surveys (or physical systems, such as the NGS benchmarks) to heights above mean sea level.

Developing geoid models is a complicated science and, in some cases, involves competing theories. One such example is the GEOID12B which creates the North American Vertical Datum of 1988 (NAVD 88), the official vertical datum for orthometric heights across the continent.

What’s Wrong with Most Measurements – Including NAVD 88

Getting back to Denver’s benchmark on the steps of the state capitol, how do we know that the building hasn’t settled? Or that the marker didn’t disappear when clearing the latest snow fall? The fact of the matter is that we don’t. Many of these benchmarks are 80+ years old, almost never re-checked for movement, and were all determined by leveling from a single point – that lighthouse in Quebec – allowing for cross-country error buildup2.

Additionally, the GRACE satellite mission has shown that NAVD 88 suffers from a zero-height difference that is ≈50 cm biased and has a ≈1-meter tilt. For these reasons, an update is planned for 2022. But what to do until then?

The choice of vertical datum is critical to applications like coastal flood mapping. FEMA’s switch to the NAVD 88 (over the NGVD 29), dramatically improved the accuracy of the national Flood Insurance Rate Maps (FIRM). However, one of the principles behind FIRM is standardization across the country – i.e., use of the same vertical datum across the country. But, as we see from above, mean sea level is a very localized phenomenon and there are a number of flaws in NAVD 88.

Intermap provides higher accuracy than the national flood maps by having the ability to reference any mean sea level geoid reference – meaning we can localize elevation mapping using the best available models for that geographic area. 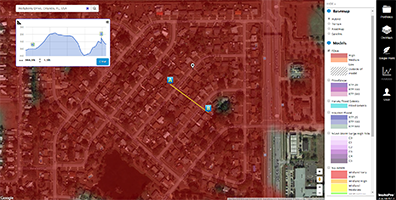 2Ellignson, “NGS is Scheduled to Replace NAVD 88 and NAD 83 in 2022”, January 2017 at the Indiana Society of Professional Land Surveyors Conference at https://cdn.ymaws.com/www.ispls.org/resource/resmgr/2017_Convention_Handouts/Ellingson_-_Replacing_NAD_83.pdf, accessed 23 January 2019.