You have reached the cached page for https://www.movoto.com/guide/san-diego-ca/affordable-san-diego-suburbs/
Below is a snapshot of the Web page as it appeared on 11/27/2020 (the last time our crawler visited it). This is the version of the page that was used for ranking your search results. The page may have changed since we last cached it. To see what might have changed (without the highlights), go to the current page.
You searched for: What are the best cities near San Diego CA? We have highlighted matching words that appear in the page below.
Bing is not responsible for the content of this page.
These Are The 10 Most Affordable San Diego Suburbs - Movoto
In Affordable Best Suburbs

These Are The 10 Most Affordable San Diego Suburbs

Living in the paradise of San Diego doesn’t have to cost you an arm and a leg.

San Diego is known for its beautiful weather, awesome cuisine, and diverse mix of cultures, so it’s easy to see why so many people want to live in San Diego. While it’s pretty expensive in the city, if you’re willing to check out the suburbs, you’ll find a much better deal. Here are the 10 most affordable suburbs in the San Diego region.

Not only is Lemon Grove home to the “world’s largest lemon,” a 10-foot wide behemoth on Main Street, it’s also home to some of the most affordable living in the San Diego area. The name of this town comes from its start as a citrus farming community, but it has since made the transition into a modern and picturesque San Diego suburb. Lemon Grove’s town slogan is “the best climate on Earth,” and with average summer temperatures around 76 degree and winter averages around 58, that statement couldn’t be truer.

National City makes our list of affordable suburbs thanks to having some of the cheapest homes in the San Diego area. National City is home to the “Mile of Cars,” one of the first auto malls in the world, as well as part of Naval Base San Diego, the largest U.S. Navy base on the West Coast. This community also hosts its fair share of annual events throughout the year, including the National City Automobile Heritage Day Car Show and a large 4th of July Celebration in Kimball Park.

Located 18 miles from the Pacific Ocean, Santee is one affordable suburb that keeps you out of the hustle and bustle of a major city, while still providing you with convenient access to San Diego. While plenty of space in Santee is still capable of being further developed, in recent years the town has grown at a rapid rate, adding a business park, shopping centers, and upscale housing. It’s also home to Sportsplex USA Santee, a 15-acre sports field complex with three softball fields, batting cages, two soccer fields, and a sports bar.

. Imperial Beach is actually a little closer to Tijuana than San Diego. This makes it easy to experience the great things that both places have to offer without being in the car for more than 20 minutes either way. Imperial Beach is home to four full miles of coastline that the residents can enjoy, making this a great destination for water athletes.

Once a rural town, Poway has since become a thriving suburb of San Diego, home to huge employers like General Atomics Aeronautical Systems and Geico Direct. Poway is especially notable for its great selection of parks, including the Blue Sky Ecological Reserve and the area around Lake Poway. With all that outdoor space, there are plenty of hikeable trails and great bike paths that make it easy to get out in the Californian sun.

Known for being one of the oldest cities in San Diego County, Escondido lies in a valley surrounded by beautiful hills. It’s also one of the larger cities in the area with over 140,000 residents, boasting all of the amenities you’d expect with a population that high. One of the coolest attractions here is the San Diego Zoo Safari Park, a 1,800 acre nature preserve that’s home to over 2,600 animals and more than 300 species, including giraffes, buffalo, and rhinoceroses.

Another one of the larger cities in San Diego County, Oceanside is most recognizable for the Oceanside Pier, first built in 1888, now stretching nearly 2,000 feet over the ocean. The area is a very popular surfing destination and attracts tons of beachgoers on an annual basis. Oceanside is 38 miles north of San Diego, but the beachside drive down Interstate 5 into the city is one of the most beautiful commutes in the country.

Home to almost 250,000 residents, Chula Vista can seem like a big city in itself, despite being less than eight miles from downtown San Diego. This city is often noted for its vibrant culture and being home to the OnStage Playhouse, one of the only live theaters of its caliber in the San Diego region. Chula Vista is also home to the SleepTrain Amphitheatre, a 20,500 seat outdoor venue that’s makes catching concerts a blast.

Despite having more expensive rent, El Cajon has some of the cheapest homes on our list of affordable San Diego suburbs. It’s also got one of the lower cost of living averages, meaning you’ll spend less living here than you would elsewhere in this metro area. Home to big companies like Taylor Guitars and its own airport, the affordable community of El Cajon is totally worth checking out.

If you’re looking to find a vibrant community in a beautiful location, all while staying within a budget, La Mesa might be the place for you. With events like a weekly farmers’ market, an annual Oktoberfest, a Back to the 50s Car Show, and a special “Sundays at Six” concert series during the summer, there’s always something going on here. Plus, it’s only nine miles east of downtown San Diego.

To create this list of affordable San Diego suburbs, we took a look at the following criteria:

We then averaged those scores into one overall score and the suburbs with the 10 lowest scores made up our list of the top 10 most affordable San Diego suburbs. For this list, we got our data from AreaVibes, business listings, and the 2013 U.S. Census American Community Survey. Want to see how all 18 San Diego suburbs stacked up? Take a look at the table below: 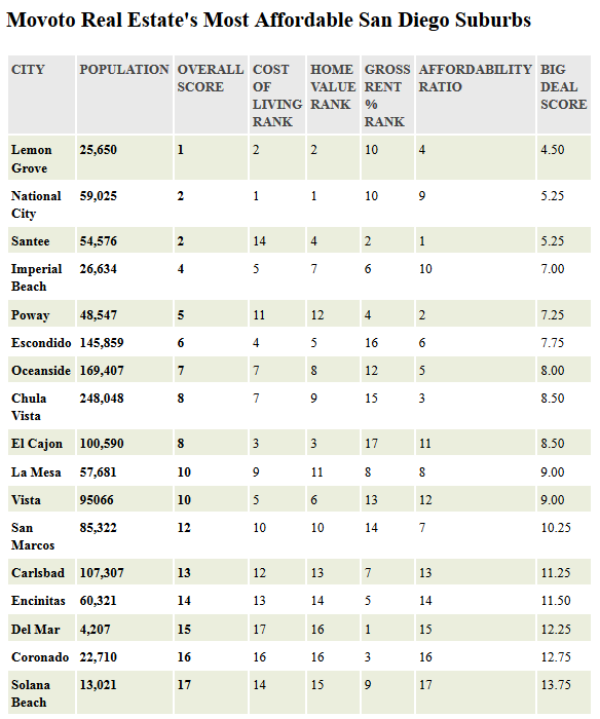 Facts
37 Things You Probably Didn′t Know About San Diego
Sure, the weather is perfect and the beaches are flawless, but here are a few things you might have missed about America’s Finest City.

Stereotypes
10 San Diego Stereotypes That Are Completely Accurate
So you think you know San Diego? Welp, looks like you actually do. 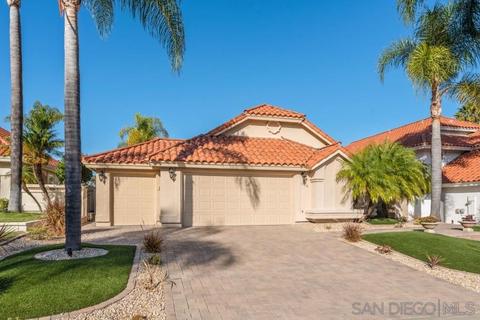 14 Reasons You Should Date Someone From San Diego

Living In San Diego: 22 Things You Need To Know First

These Are The 10 Best San Diego Suburbs To Retire

These Are The 10 Best San Diego Suburbs To Live In

These Are The 10 Best San Diego Suburbs For Young Couples