Vault was a carbonated beverage that was released by The Coca-Cola Company in June 2005 until December 2011. It was touted as an artificially flavored hybrid energy soda. Coca-Cola was marketing Vault as a combination with the slogan "Drinks like a Soda, Kicks like an Energy Drink," as well as "The Taste. The Quench. The Kick." "Get it Done, and Then Some," "Chug & Charge," and "Get to It!"

Vault was a citrus flavored beverage that contains many of the same ingredients as the Coca-Cola beverage Surge, which was discontinued in 2002. Test-marketing occurred in a limited area from June 2005 through Labor Day 2005. During this time, the drink was only available in certain markets in Alabama, Georgia, Kansas, Michigan, North Carolina, South Carolina, Tennessee, Virginia, and West Virginia. Vault was released nationally in February 2006 following commercials that were shown during the pregame show for Super Bowl XL.

There were many varieties of Vault, but the two most common were Vault and Vault Zero. You can find a listing of ingredients for each below, in the order listed on the label.

In September 2005, The Coca-Cola Company released Vault Zero, a diet version of the citrus soda. Grape Vault and Peach Vault were two variants available only from The Coca-Cola Freestyle Machines. 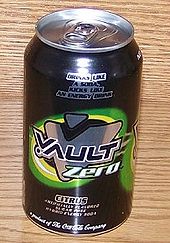 A can of Vault Zero

Vault became known for its inventive commercials featuring eccentric narration. These commercials showed men doing extraordinary things while drinking Vault, in line with the slogan, "Vault. Get to it!" One such commercial featured a man building a robotic scarecrow with laser eyes that rids his farm of crows, foxes, rabbits, and hippies. Other commercials included a man converting his and his neighbors' backyards into a football field using explosives and a chainsaw; a man renovating his house into a giant birdcage; a man who blows up a reef bed to obtain a large amount of pearls in order to win his girlfriend back from a Fabioesque man, and a man excelling at paintball, at one point using a squirrel as an improvised weapon.

Vault Red Blitz, a new Vault flavor, was released in late-February 2007 to compete with PepsiCo's Mountain Dew Code Red, along with promotional pricing in select areas. Until its release, Coca-Cola had only released Mello Yello Cherry in limited markets as a competitor to Code Red, which has been available since 2001. Vault Red Blitz is berry-flavored, red, and also features the herbal supplement guarana.[4]

In 2006, Vault Zero was reformulated in response to a lawsuit over allegations that ingredients in Fanta Pineapple and Vault Zero had the potential in certain circumstances to combine to form benzene, a carcinogenic compound.[5]

After Vault's production was nationally discontinued, many people were outspoken on the Facebook fan page and other venues in an attempt to convince Coca-Cola to bring the soft drink back. As these requests seemed to fall on deaf ears, a new movement emerged, attempting to convince the company to bring the original Surge soda back to market. This "SURGE MOVEMENT" formed on Facebook as a new activist group with the same goals as its predecessor, "Save Surge." [6]