You have reached the cached page for https://wikitruckinfo.blogspot.com/2018/01/truck-classification.html
Below is a snapshot of the Web page as it appeared on 6/20/2021 (the last time our crawler visited it). This is the version of the page that was used for ranking your search results. The page may have changed since we last cached it. To see what might have changed (without the highlights), go to the current page.
You searched for: Truck classification Medium duty wikipedia We have highlighted matching words that appear in the page below.
Bing is not responsible for the content of this page.
Truck classification
Sponsored Links
-->
Home › Unlabelled › Truck classification 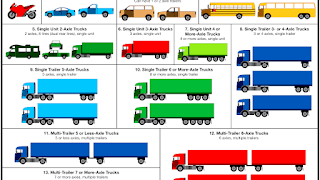 Truck Classifications are typically based upon the maximum loaded weight of the truck (typically using the gross vehicle weight rating (GVWR) and sometimes also the gross trailer weight rating (GTWR)), and can vary among jurisdictions.

In the United States, commercial truck classification is determined based on the vehicle's gross vehicle weight rating (GVWR). The classes range from 1-8. Trucks are also classified more broadly by the Department of Transportation's Federal Highway Administration (FHWA), which groups classes 1-3 as light duty, 4-6 as medium duty, and 7-8 as heavy duty. The United States Environmental Protection Agency has a separate system of emissions classifications for trucks. The United States Census Bureau also assigned classifications in its now-discontinued Vehicle Inventory and Use Survey (VIUS) (formerly Truck Inventory and Use Survey (TIUS)).

Table of US GVWR classifications

When light-duty trucks were first produced in the United States, they were rated by their payload capacity in tons (e.g., ½-, ¾- and 1-ton). Over time, payload capacities for most domestic pickup trucks have increased while the ton titles have stayed the same. The now-imprecise ton rating is presently used to compare standard sizes, rather than actual capacities.

Similar schemes exist for vans and SUVs (e.g. a 1-ton Dodge Van or a ½-ton GMC Suburban), medium duty trucks (e.g. the Ford 1½-ton F-450) and some military vehicles, like the ubiquitous deuce-and-a-half.

Vehicles in Class 7 and above require a Class-B commercial driver's license (CDL) to operate in the United States.

The Class 8 truck gross vehicle weight rating (GVWR) is a vehicle with a GVWR exceeding 33000 lb (14969 kg). These include tractor trailer tractors as well as single-unit dump trucks of a GVWR over 33,000 lb; such trucks typically have 3 or more axles. The typical 5-axle tractor-trailer combination, also called a "semi" or "18-wheeler", is a Class 8 vehicle. Standard trailers vary in length from 8' containers to 57' van trailers, with the most common length being the 53' trailer. Specialized trailers for oversized loads can be considerably longer. Commercial operation of a Class 8 vehicle in the United States requires either a Class-B CDL for non-combination vehicles, or a Class-A CDL for combination vehicles (tractor-trailers).

The practical gross vehicle weight limit in the USA for Class 8 trucks is determined by per-axle weight limits set by the Federal Bridge Gross Weight Formula on interstate highways. Longer 18-wheelers can weigh up to 80,000 lbs. In most states, exceptions to these limits can be made for an Oversize load but they require special permits and handling on a designated route.

Usually classifies a heavy, special duty Class 8 truck. For example the Western Star 6900 is designed for off-highway vocations including logging, mining, and other similar applications.

Vehicle classifications vary among provinces in Canada, due to "differences in size and weight regulations, economic activity, physical environment, and other issues".:3 While several provinces use their own classification schemes for traffic monitoring, Manitoba, Ontario, Prince Edward Island and Saskatchewan have adopted the 13-class system from the United States' Federal Highway Administration--sometimes with modifications, or in Ontario's case, for limited purposes.:3-4 British Columbia and Ontario also distinguish between short- and long-combination trucks.:3-4 In accident reporting, eight jurisdictions subdivide trucks by GVWR into light and heavy classes at approximately 4500 kg 9921 lb.:6

In the European scheme the licenses are (among others) B for cars, C for trucks (lorries), D for buses, and are limited by the GVWR.

Source of the article : Wikipedia