You have reached the cached page for https://www.rottentomatoes.com/m/tora_tora_tora
Below is a snapshot of the Web page as it appeared on 1/21/2021 (the last time our crawler visited it). This is the version of the page that was used for ranking your search results. The page may have changed since we last cached it. To see what might have changed (without the highlights), go to the current page.
You searched for: Tora! Tora! Tora! We have highlighted matching words that appear in the page below.
Bing is not responsible for the content of this page.
Tora! Tora! Tora! (1970) - Rotten Tomatoes
Home
Top Box Office
Tickets & Showtimes
DVD & Streaming
TV
News 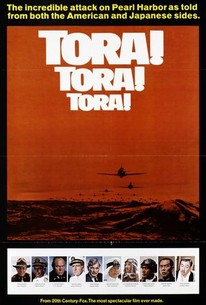 Tora! Tora! Tora! is scrupulously accurate and lays out of the tragedy of Pearl Harbor with intricate detail, but the film's clinical approach to the sound and fury signifies little feeling.

This dramatic retelling of the Pearl Harbor attack details everything in the days that led up to that tragic moment in American history. As United States and Japanese relations strain over the U.S. embargo of raw materials, Air Staff Officer Minoru Genda (Tatsuya Mihashi) plans the preemptive strike against the United States. Although American intelligence agencies intercept Japanese communications hinting at the attack, they are unwilling to believe such a strike could ever occur on U.S. soil.