You have reached the cached page for https://www.amazon.com/Their-Own-Desire-Norma-Shearer/dp/B003GWDT34
Below is a snapshot of the Web page as it appeared on 9/10/2020 (the last time our crawler visited it). This is the version of the page that was used for ranking your search results. The page may have changed since we last cached it. To see what might have changed (without the highlights), go to the current page.
You searched for: Their Own Desire We have highlighted matching words that appear in the page below.
Bing is not responsible for the content of this page.
Amazon.com: Their Own Desire: E. Mason Hopper, Norma Shearer, Belle Bennett, Lewis Stone, Robert Montgomery: Movies & TV 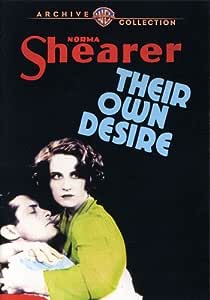 "Forty-five? And falls in love?" Lally Marlett laughs off the thought that her middle-aged father could still feel the flame of romance - until he runs off with another woman. Shocked and embittered, Lally accompanies her mother on a vacation in an attempt to put the past behind them. But the past catches up when she falls for a polished charmer who, unknown to her, is the son of her father's paramour. Norma Shearer and Robert Montgomery headline Their Own Desire, scripted by woman's-picture screenwriter extraordinaire Frances Marion (Dinner at Eight, Camille). Marion shows her skill at heartbreak by packing star-crossed love, infidelity and two near-death experiences into a brisk 64 minutes of romantic melodrama.

4.7 out of 5 stars
4.7 out of 5
11 global ratings
How are ratings calculated?
To calculate the overall star rating and percentage breakdown by star, we don’t use a simple average. Instead, our system considers things like how recent a review is and if the reviewer bought the item on Amazon. It also analyzes reviews to verify trustworthiness.
Top reviews

Thomas J Lombardo
5.0 out of 5 stars Shearer and Montgomery : A Perfect Pairing.
Reviewed in the United States on March 24, 2015
Verified Purchase
Norma Shearer and Robert Montgomery star in this 1929 melodrama from MGM about marriage, infidelity and star -crossed love . There is excellent support from Lewis Stone and Belle Bennett as .Shearer's parents facing the finality of divorce. The center of the film, however, is forbidden love, bea utifully interpreted by the two stars. Another gem from MGM 's long roster of fine films.
Read more
4 people found this helpful
Helpful
Comment Report abuse

Mason von Mason
5.0 out of 5 stars good early talkie
Reviewed in the United States on March 26, 2012
Verified Purchase
I liked this movie a lot,especially considering this was a early talkie
Norma Shearer is slimmer then in any of the other movies I have of this Great Lady,very sexy!

calvinnme
HALL OF FAME
4.0 out of 5 stars Love and evasion of risk are incompatible it seems
Reviewed in the United States on July 4, 2015
Today, most women initiate divorces. But there was a time when it was the other way around since women had few options outside of the home. If you were a woman, you'd just better hope that as the bloom fell off of your rose that your husband did not get the 7, 17, or 27 year itch. This is about the impact of one of those marriages with an itchy husband, an unlikely cad, Lewis Stone as Marlett.

I like how this movie takes the time to build up the characters, always a trademark of screenwriter Frances Marion. A great deal of time is spent in the beginning to show the respect and friendship wealthy author Marlett has with his only child, Lally (Norma Shearer). Then a tell - she asks her dad as they walk up the drive, what book he is working on. He says it is a romance involving a 45 year old man. She, about 20, laughs at the idea. Marlett says that the middle aged are made of flesh and bone too. That life is not over at 30 as youngsters think, and that they thirst for romance, that "last" romance, indicating that dad might be thirsty. When they get to the top of the drive, the slender and glamorous Mrs. Chevers is talking to Lally's mom about her son, Doug, who is away at Princeton. Lally's mom is graying, a bit overweight, a bit sedentary, and Marlett calls her affectionately "mama". Indicating that he thinks of her as first Lally's mom - and a good one - and then a wife.

A year passes and Marlett and his wife are planning to divorce, as is Mrs. Chevers from her husband, but Lally yet knows none of this. She walks into her dad's study and catches Mrs. Chevers and her father in a passionate embrace, talking of marriage. Then her dad tries to justify it. He says that he and her mother are not the same boy and girl who made all of those promises 23 years before. I like Lally's translations - that perhaps he sees her mom as a fat and a bit boring "unlike the slick Mrs. Chevers". He says he intends to keep the house. She reminds him that doesn't matter to her since her mom is being bundled out of that house and Mrs. Cheever is being brought in to replace her. Lally says her final goodbye to him and plans to never marry because she will not be made a fool of as her mother has been, and the male sex has fallen mightily in her esteem because of her father's fall, which he won't even acknowledge as a misdeed.

So off go mother and daughter for a summer vacation before mom goes to France for a divorce, which was the custom in that day. When Lally reiterates her vow to never marry, her mom is happy, which seems odd. Meanwhile, back at the ranch, Marlett is not succeeding at hanging out at his old haunts with his new mistress. They both get the cold shoulder from everyone. I'm not sure why this scene was in here other than to show that people did pass moral judgment on affairs and homewreckers at that time, and that a smooth transition did not await them both if they proceed.

On vacation, Lally meets a guy (Robert Montgomery) who really fancies her. They dance, they enjoy each other's company, and maybe Lally is softening on men just a bit until she discovers his full name - Jack "Doug" Chevers - son of the woman who has ousted her mother, a symbol of why she decided to not take men seriously in the first place.

So Lally is one confused girl. She has a mom who encourages her to play the field due to her own bad experience with marriage. She has a dad who thinks "until death to we part" is just a phrase people like to kick around at weddings, and she has a beau who is insisting on marriage now - as in right this minute. How will this all work out? Watch and find out.

This is very good writing by Frances Marion who had already had a couple of short lived marriages that did not work out and one that did that ended in her husband's sudden death just the year before. Thus she could approach this subject of love from the viewpoint of someone who had seen all of the angles. I'd highly recommend it.

R PRIUS
4.0 out of 5 stars The New, Improved Norma Shearer
Reviewed in the United States on October 16, 2012
Despite this films age, this film works and is a pleasant example of an early talkie that is interesting to the extent that I quickly forgot that this was a dinosaur in terms of technical development .
The plot is fairly simple. Norma Shearer plays Lottie, the adoring and adored daughter of Lewis Stone. All seems to be going well within the family including Lottie's parents long term marriage until Stone tells his wife (played by an appropriate aging Belle Bennett) that he has become entangled with a much married woman who has pizazz. Without so much as a second thought, Stone sets the wheels in motion for a divorce so he can wed the middle aged temptress (Helen Millard). Not surprisingly, Lottie washes her hands of her father and wants nothing to do with him or his gal pal. Complications occur when Lottie meets and falls in love with her future stepmother's son (Robert Montgomery). The rest of the movie plays on Lottie's feelings of conflict and a tense storm which helps Lottie's true feelings to rise to the surface.
My objectivity goes out the window with this film as I am a huge Shearer fan. She really milks this role for all it's worth and she is in her prime and looks lovely. The supporting cast is quite good and they play off one another convincingly.
The most compelling reason to see this movie is that it is not only interesting, but it also is an early example of the type of role Shearer would dominate in during her tenure as the queen of the MGM lot.
As for the print of this movie, forget it. Not remastered as this is from the Warner Archive which is manufactured by demand.
Read more
8 people found this helpful
Helpful
Comment Report abuse
See all reviews

Mrs. Gillian E. Marriott
5.0 out of 5 stars Romeo and Juliet in 1929.
Reviewed in the United Kingdom on October 25, 2016
Verified Purchase
I love these Pre-code films, and Norma Shearer in them. Not a very long movie, but quality in it's content and in the actors and actress' who starred in this love story. Just to say it isn't sachrin sweet, but full of twists and turns and finally near tragedy. Norma and Robert Montgomery fell into breath taking romantic love, and gave brilliant performances as the lovers who tried to fight overwhelming fate, and.....Sorry to say more would spoil the dramatic ending. So if you love Pre-code movies, Norma Shearer and Robert Mongomery, buy it and enjoy.
Read more
One person found this helpful
Helpful
Sending feedback...
Thank you for your feedback.
Sorry, we failed to record your vote. Please try again
Report abuse
See all reviews