You have reached the cached page for https://www.amazon.com/Velocity-Gary-Thomas-Jane/dp/B0001EFTTW
Below is a snapshot of the Web page as it appeared on 2/23/2021 (the last time our crawler visited it). This is the version of the page that was used for ranking your search results. The page may have changed since we last cached it. To see what might have changed (without the highlights), go to the current page.
You searched for: The Velocity of Gary We have highlighted matching words that appear in the page below.
Bing is not responsible for the content of this page.
Amazon.com: The Velocity of Gary: Salma Hayek, Thomas Jane, Vincent D'Onofrio, Ethan Hawke, Tzi Ma, Dan Ireland, Dan Lupovitz, Cineville International Inc.; Ventanarosa: Movies & TV 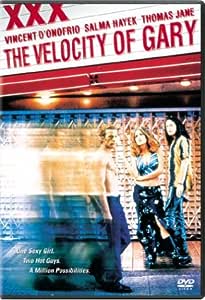 The Velocity of Gary

In the underground culture of New York City, Valentino (Vincent d'Onofrio) is a bisexual adult filmstar torn apart by two loves: tempestuous waitress Mary (Academy Award nominee Salma Hayek, "Frida") and hunky street hustler Gary (Thomas Jane). Neither of them can stand the other, but when Val isdiagnosed with AIDS, the two must put aside their differences and become strong for the man they love. Together, the three of them will explore life, love, and the true meaning of family.

4.1 out of 5 stars
4.1 out of 5
50 global ratings
How are ratings calculated?
To calculate the overall star rating and percentage breakdown by star, we don’t use a simple average. Instead, our system considers things like how recent a review is and if the reviewer bought the item on Amazon. It also analyzes reviews to verify trustworthiness.
Top reviews

Stephen Glaspie
2.0 out of 5 stars Don't be Fooled by the Cover???? REALLY!!!
Reviewed in the United States on December 23, 2014
Verified Purchase
This movie had great potential to be great, but it didn't happen, why the the 2 stars? Well that is two words, "Thomas Jane". aka "Gary", he seem the most believable character in the the whole film. Vincent D'Onofrio , was okay in one of the lead roles, but Salma Hayek, character was down right pain to watch. Obviously her acting had improved over the years. But, not in this film. Okay I will tell you about the film without giving it away. Here we go: The movie is loosely based on "Gary" not his real name? it will make since if you do decide to watch it. This seem to be staged during the scare of Aids, and just know this movie is not based on that, but on the relationships between the 3 main characters. The movie is more to the liking of a hustler in love with someone he has to share. Like I said, this movie should be remade with more of a focus on "Gary"?
Read more
One person found this helpful
Helpful
Report abuse

azindn
4.0 out of 5 stars Love in All Shapes and Sexes
Reviewed in the United States on July 26, 2001
Verified Purchase
A film of unusual tenderness that explores human love and fragility in all forms is The Velocity of Gary. The complex menage of Valentino (Vincent D'Onofrio), Gary2 (Thomas Jane), and Salma Hayek are a complex trio whose devotion to one another is never a smooth relationship. Valentino is dying of AIDS and his lovers fight over how he should be cared for is a lesson in life and letting go. This is a complex little film which stages its story against the backdrop of gay subculture and NYC porn. It's not a film for everyone, but it is a wonderful love story that presents the tenderness and longing for love and companionship with respect.

... This is a touching film for anyone who enjoys love stories and fabulous acting. The physical beauty of this cast is stunning and the performances top notch.

NYC Nurse
4.0 out of 5 stars For D'Onofrio fans
Reviewed in the United States on December 25, 2012
Verified Purchase
because he is gorgeous here! Otherwise, the dialogue is hackneyed and ridiculous, Salma Hayek is atrocious as a petulant, whiny, spastic "sassy" Latino waitress, Thomas Jane appears perpetually confused like he's not sure why he chose to appear in this movie, and as a nurse I couldn't help noticing the completely inaccurate depiction of a man dying of AIDS. Still, D'Onofrio and his tremendous acting skills manage to rise above the dreck (as usual)and deliver a poignant performance. Too bad you have to wade through so many cliches and stilted performances.
Read more
2 people found this helpful
Helpful
Report abuse

LadyArmand
5.0 out of 5 stars Best male screen kiss ever
Reviewed in the United States on June 11, 2000
Verified Purchase
There have been lots of movies lately that pay lip service to the lifestyle shown in this movie. If you are turned off by knowing there is going to be same sex kisses then you are missing a really good movie for a very sad reason. This is about more then just male kissing. It's about love and respect, and the struggle to find both. It's about once that love is found how do you keep it in a world that has stacked the deck against you. It's about finding out you can love more then one person in more then one way. It's about finding that once person who loves you no matter what and having to let that person go. This is turly a must see movie. All of this being said, this movie still contains the best screen kiss I have ever seen. It's all at once sexy, longing, desperate, passionate, and loving.
Read more
16 people found this helpful
Helpful
Report abuse

Robert Amsel
5.0 out of 5 stars Accurate Portrayal of New York Underbelly
Reviewed in the United States on November 16, 2001
Verified Purchase
It took a long time for me to see this movie because I was misled by inaccurate and unfair reviews. When I was very young and living in New York, I more than rubbed up against the milieu presented in this movie (although the use of drugs is kept to a minimum here). Based on my own experiences, the relationships among the various characters -- ranging from those who are callous and heartless to those who are passionate and intense -- was right on the mark. It's a courageous movie, and an honest one. Mainly, it concerns an ex-porn star, his male lover, and his fag hag, as well as the odd assortment of street people who weave in and out of their lives. The three principals love and fight among themselves as they cope with an ever approaching grim reaper. The movie's ultimate accomplishment is to show us the great beauty and humanity that exists, even sparkles, in the souls of a group of outcasts written off by just about everyone else. It is also a hopeful movie in which the power of love overcomes even death. Unfortunately, it is NOT a movie for "straight" people -- and I use that term in a far wider context than sexually straight. Let's just say that the arthritic-minded will be too repelled or too fearful to open themselves up to this highly positive cinematic experience. Additionally, the movie is sensitively directed, and superbly acted by all.
Read more
15 people found this helpful
Helpful
Report abuse

warren
3.0 out of 5 stars just ok or less
Reviewed in the United States on January 2, 2016
Verified Purchase
it was okay. you have to watch it not to believe it. salma hayek is obnoxious as 'the obnoxious mary' andit was not acting. d'onofrio appeared only at ease tongue- kissing jane. Thomas jane is the only actor in the film who came out with any acting chops. I loved the dog.
I won't watch it again, but wanted to see the 2 actors work together.
Read more
Helpful
Report abuse

Karen Cressey Bowman
5.0 out of 5 stars great movie
Reviewed in the United States on August 20, 2014
Verified Purchase
always has been one of my favorite movies! Vincent is at his best! don't let the material throw u off, it is a very well done movie with a lot of moments in it. I am sure you willy not be sorry if u purchase it
Read more
One person found this helpful
Helpful
Report abuse

Harry Bosch's wife
5.0 out of 5 stars Two of my favorite actors deliver excellent performances
Reviewed in the United States on February 26, 2013
Verified Purchase
This is an early independent film about free spirits in NYC. Showcasing the talents of Vincent D'Onofrio and Salma Hayak when they were first starting their careers. AIDs theme is central to the story. Bittersweet but not depressing.
Read more
One person found this helpful
Helpful
Report abuse
See all reviews