You have reached the cached page for https://www.amazon.com/Do-List-Aubrey-Plaza/dp/B00AIBZJ0C
Below is a snapshot of the Web page as it appeared on 12/28/2020 (the last time our crawler visited it). This is the version of the page that was used for ranking your search results. The page may have changed since we last cached it. To see what might have changed (without the highlights), go to the current page.
You searched for: The To Do List We have highlighted matching words that appear in the page below.
Bing is not responsible for the content of this page.
Amazon.com: The To Do List: Aubrey Plaza, Andy Samberg, Bill Hader, Clark Gregg, Connie Britton, Alia Shawkat, Rachel Bilson, Scott Porter, Christopher Mintz-Plasse, Johnny Simmons, Donald Glover, Sarah Steele, Maggie Carey, Brian Robbins, Jennifer Todd, Sharla Sumpter, Mark Gordon, Tom Lassally, Greg Walter, 3 Arts Entertainment; Mark Gordon Company, The; Mark Gordon Company,The: Movies & TV 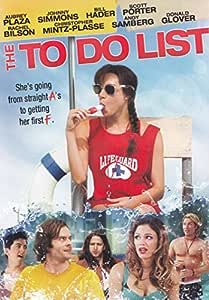 Aubrey Plaza (Actor), Andy Samberg (Actor), Maggie Carey (Director) & 0 more Rated:
R
Format: DVD
4.3 out of 5 stars 1,081 ratings
Amazon's Choice recommends highly rated and well-priced products.
Amazon's Choice for "to do list movie"
See More
Available at a lower price from other sellers that may not offer free Prime shipping.
Digital Copy Notice: The purchase of this DVD or Blu-ray disc comes with rights to access a complimentary digital version from the production company. To access the digital copy, redeem the code included in your product packaging before the expiration date. Learn more

A winning lead performance by Aubrey Plaza and a script that doesn't treat its characters or its audience like morons help buoy director-writer Maggie Carey's The To Do List. The setting is mid-'90s Boise, Idaho, where Plaza's Brandy Klark is a model student at her high school: senior valedictorian, perfect grades, headed to Georgetown in the fall. She's also a bitchy, bossy busybody… and, worst of all, a virgin. Weary of the nonstop torrent of teasing her "condition" has inspired on the part of her classmates, friends, and older sister (Rachel Bilson), Brandy revises her to-do list until it consists solely of sexual acts, many of which she can't even define (most are also far too raunchy to print on a family website--what the movie lacks in nudity, it more than makes up for in profane language), that she plans to engage in before heading off to college. Her summer job as a lifeguard trainee at the local public pool provides plenty of candidates to help her on her quest; although she fully expects to be deflowered by the studly, guitar-playing Rusty Waters (Scott Porter), she's only too eager to use Cameron (Johnny Simmons), the one guy who actually cares about her, and various others to check off the other items on her list. Brandy approaches all of this as if it were a science project, with a combination of innocence and aggressiveness that results in multiple awkward situations. But this girl is no doormat; she's a doofus, but a smart one, and she handles all the hazing and humiliation with admirable aplomb. And therein lies the film's principal appeal. The script, while often amusing, doesn't condescend, and it even offers some genuine, if obvious, insight into high schoolers and the many problems and pressures they face. Heck, even Brandy's parents are treated with some dignity. Only a brief but superfluous subplot involving a rival swimming pool detracts from this surprisingly entertaining film. --Sam Graham

4.3 out of 5 stars
4.3 out of 5
1,081 global ratings
How are ratings calculated?
To calculate the overall star rating and percentage breakdown by star, we don’t use a simple average. Instead, our system considers things like how recent a review is and if the reviewer bought the item on Amazon. It also analyzes reviews to verify trustworthiness.
Top reviews

vince west
5.0 out of 5 stars The To Do List dvd
Reviewed in the United States on April 29, 2019
Verified Purchase
SO FUNNY. One of the funniest movies I've ever seen. And as beautiful as Aubrey Plaza always is seeing her in a bikini or swimsuit 90% of the time is HEAVEN. A super smart virgin decides it's time to become a "regular" nonvirgin girl before college. So she makes a list and goes crazy over the summer for a hot guy. Nonstop laughs from start to finish with a heart felt twist.
Read more
3 people found this helpful
Helpful
Report abuse

Karl Weaver
3.0 out of 5 stars Mildly Amusing
Reviewed in the United States on September 23, 2015
Verified Purchase
This is one of those high-school graduation, coming-of-age films that’s supposed to be funny. The main character is Brandy Klark (played by Aubrey Plaza) a girl who takes everything seriously. All through high school that meant studying hard to get into college while her girlfriends were more interested in dating and learning to handle social life. Brandy’s parents are also so straight that one would guess perhaps they are Mormon, or from some equally conservative background (though the mother turns out to have been somewhat more adventurous in her youth than dad realized).

Anyhow suddenly Brandy becomes convinced she has to learn all about sex because after all, college is really where boys and girls start seriously dating, and she’d better know what she’s doing in advance. So in her methodical way she compiles a list and starts trying to check the items off, over the course of the summer after graduation. Half the items on the list, she doesn’t even know the meaning of, and she has to look them up or have them explained to her.

Now I admit—I didn’t know the meaning of a few of the items either—though this still does not compare to the astonishing outburst of phraseology from the Indian salesman in “40 Year Old Virgin”—a list that I’ve vowed to go back to someday, watch the subtitles, write it down, and figure it all out, but I still haven’t done so. Nor is the movie in general either as funny or as interesting as that predecessor. I would describe it as “mildly amusing, and fairly harmless”

ikwi
5.0 out of 5 stars Raunchy and hilarious
Reviewed in the United States on July 8, 2020
Verified Purchase
Raunchy and hilarious, with a great cast and performances, and a surprising amount of warmth. Notable: Scott Porter playing against his usual good-boy type as a stoned and perpetually shirtless surfer dude.
Read more
One person found this helpful
Helpful
Report abuse

Clown
3.0 out of 5 stars It was okay
Reviewed in the United States on December 21, 2020
Verified Purchase
Never really seen the movie but it was okay. Wasn’t a 5 star because I didn’t see the movie good enough to watch more than 5 times. Other than that the package was fine.
Read more
Helpful
Report abuse

Aubree Root
4.0 out of 5 stars Just as good as Easy A
Reviewed in the United States on December 16, 2020
Verified Purchase
This movie came out 3 years after Easy A, but has somehow stayed under the radar. The to-do list is really fun, and after seeing Easy A on TV 100,000 times, a welcome relief!
Read more
Helpful
Report abuse

Joe Klamath
3.0 out of 5 stars kind of cute
Reviewed in the United States on December 3, 2020
Verified Purchase
cute premise especially for the times with the only fans girls and e girls putting out like crazy... didn't really deliver but not terrible.
Read more
Helpful
Report abuse

This movie reminds me of American Pie and Super Bad

@mistervaux
4.0 out of 5 stars A Great Little Black Comedy!
Reviewed in the United Kingdom on July 30, 2018
Verified Purchase
A funny, imaginative and off-beat coming of age movie. I'd slide it alongside Igby Goes Down and Charlie Bartlett as a kind of culty black comedy, albeit more expressly focussed on sex than those two. Well worth a watch.
Read more
Report abuse

Peter M
2.0 out of 5 stars Unfortunately I didn't think it was funny
Reviewed in the United Kingdom on June 4, 2014
Verified Purchase
The trouble with this sort of film is that, to be sustainable it has to be funny for longer than the first 15 minutes. I am afraid that this film ran out of ideas and stopped making you laugh after about that time, as it just kept relentlessly going down a random route of sexual exploration. Aubrey Plaza deadpans her way sweetly through almost every scene, but it just feels as though you are doing the rounds of a sexual supermarket with a burdensome shopping list waiting for laughs/satisfaction that never quite arrive.
Read more
One person found this helpful
Report abuse

melbopp
4.0 out of 5 stars Four Stars
Reviewed in the United Kingdom on October 23, 2014
Verified Purchase
mildly amusing very much like a john hughes movie from the 80s updated to the 2000s
Read more
Report abuse
See all reviews