You have reached the cached page for https://www.yidio.com/movie/the-reaping/27213
Below is a snapshot of the Web page as it appeared on 10/28/2020 (the last time our crawler visited it). This is the version of the page that was used for ranking your search results. The page may have changed since we last cached it. To see what might have changed (without the highlights), go to the current page.
You searched for: The Reaping movie We have highlighted matching words that appear in the page below.
Bing is not responsible for the content of this page.
Watch The Reaping Online | 2007 Movie | Yidio

Released April 5th (Holy Thursday) in 2007 The Reaping is a combination of Horror and Thriller following the story of Dr. Katerine Winter (played by actress Hillary Swank) as her proclaimed Atheism is challenged by supernatural events in this 99 minute film. Directed by Stephen Hopkins and staring Hillary Swank (two time Academy winner) and Idris Elba (from Prometheus) as Ben her assistant. Rated R for violence, disturbing images, and some sexuality. This movie contains many intense moments including several instances of dead animals, violence against animals, suicide and the appearance of many corpses several of which are in the later stages of decomposition.

After the tragic events in Sudan that stole her family from her, Professor Winter (a former Christian missionary) has found her faith shaken to the point of nonexistence. So much so that it has reached the point where this professor of theology has taken to moonlighting as a debunker of supernatural events. Events are set in motion when she is contacted by Doug (David Morrissey), a science teacher from the small town of Haven, in the wake of a child's death under mysterious circumstances. Upon arrival Winter is confronted by a series of incidents parroting the Plagues of Egypt from Exodus. As rivers run red with blood, citizens are viciously attacked by locusts swarms, and dead frogs rain from empty skies - this skeptic must come to a hard realization. This is the realization that one's determined disbelief does not preclude the existence of a greater power. She will need to find her faith if she is to stand against the strange and dangerous cult located in the swamp... as well as a possible anti-Christ.

The Reaping is an Horror movie that was released in 2007 and has a run time of 1 hr 39 min. It has received mostly poor reviews from critics and viewers, who have given it an IMDb score of 5.6 and a MetaScore of 36.

The Reaping is available to watch and stream, buy on demand at Amazon, Vudu, Google Play, iTunes, YouTube VOD online. Some platforms allow you to rent The Reaping for a limited time or purchase the movie and download it to your device.

I Still Know What You Did Last Summer

I Spit on Your Grave 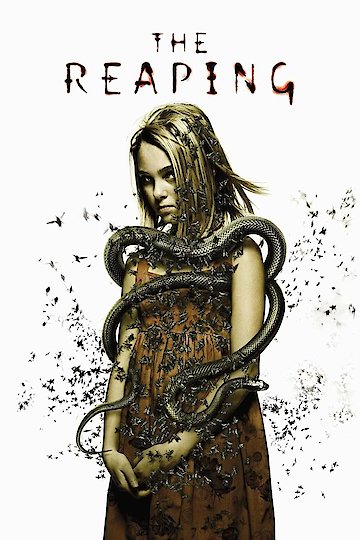 The Ghost and the Darkness

A Nightmare on Elm Street 5: The Dream Child

The Affair of the Necklace