You have reached the cached page for https://www.imdb.com/title/tt0630041/
Below is a snapshot of the Web page as it appeared on 12/15/2020 (the last time our crawler visited it). This is the version of the page that was used for ranking your search results. The page may have changed since we last cached it. To see what might have changed (without the highlights), go to the current page.
You searched for: The Promise tv We have highlighted matching words that appear in the page below.
Bing is not responsible for the content of this page.
"Lawman" The Promise (TV Episode 1961) - IMDb
FULL CAST AND CREW | TRIVIA | USER REVIEWS | IMDbPro | MORE LESS
0Check in
X I'm Watching This!
Keep track of everything you watch; tell your friends.

30min | Western | Episode aired 11 June 1961
Season 3 | Episode 39
Previous
All Episodes (156)
Next
At the gallows, Jed Barrister swears he will kill Troop and hearkens to anyone to take up the challenge. With a target on his back, Johnny wishes Dan would leave town for a few days as some strangers just came in on the stage. 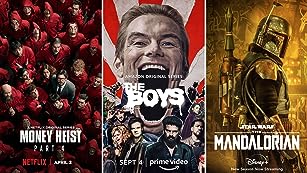 As the year comes to a close, we present the top TV shows of 2020, including "Money Heist" and "The Mandalorian."

Search for "The Promise" on Amazon.com

Johnny is at Fort Laramie where Jed Barrister is hanged by the Army for several crimes. In his last statement Jed wills his share of the loot collected to one man to shoot Troop in the back or by facing him. Johnny returns to Laramie to inform Troop who takes the news calmly but Johnny is on edge. He confronts every stranger he meets and is particularly aggressive with an uncooperative man until Troop intervenes. As Johnny faces his suspect for the second time, a gunshot from the Birdcage proves Johnny has the wrong man. Troop is saved by the back of a chair. Johnny' suspect was eloping and thought Johnny was trying to intervene on behalf of the bride's father. Written by Anonymous