You have reached the cached page for https://www.rottentomatoes.com/m/object_of_my_affection
Below is a snapshot of the Web page as it appeared on 1/16/2021 (the last time our crawler visited it). This is the version of the page that was used for ranking your search results. The page may have changed since we last cached it. To see what might have changed (without the highlights), go to the current page.
You searched for: The Object of My Affection We have highlighted matching words that appear in the page below.
Bing is not responsible for the content of this page.
The Object of My Affection (1998) - Rotten Tomatoes
Home
Top Box Office
Tickets & Showtimes
DVD & Streaming
TV
News 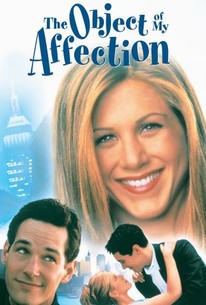 The Object of My Affection

Despite heartfelt performances from Jennifer Aniston and Paul Rudd, The Object of My Affection suffers from too many plot contrivances and frequent turns into rom-com sappiness.

The Object of My Affection Ratings & Reviews Explanation

The Object of My Affection Photos

New York City social worker Nina Borowski (Jennifer Aniston) invites her gay friend, George (Paul Rudd), to move into her apartment after he breaks up with his longtime lover, Robert (Tim Daly). Meanwhile, Nina gets pregnant and decides to keep the baby -- but end her relationship with the child's father, boyfriend Vince (John Pankow). As Nina and George live and raise the baby together, the two grow close -- and Nina realizes she's beginning to fall in love with her friend.

Critic Reviews for The Object of My Affection

Audience Reviews for The Object of My Affection

The Object of My Affection Quotes