You have reached the cached page for https://muppet.fandom.com/wiki/Episode_111:_Swine_Song
Below is a snapshot of the Web page as it appeared on 4/15/2021 (the last time our crawler visited it). This is the version of the page that was used for ranking your search results. The page may have changed since we last cached it. To see what might have changed (without the highlights), go to the current page.
You searched for: The Muppets Swine Song We have highlighted matching words that appear in the page below.
Bing is not responsible for the content of this page.
Episode 111: Swine Song | Muppet Wiki | Fandom

"Swine Song" is the eleventh episode of the television series The Muppets.

The series returns after a two month hiatus following a mid-season finale in a new timeslot (airing on Tuesdays at 8:30PM on ABC). The plot of the episode reflects the show's retooling following the addition of new showrunner Kristin Newman.

Once the crew returns to work from hiatus, the network president enlists a new branding guru named Pache to revamp “Up Late with Miss Piggy.” After consulting with Key and Peele, Kermit and Piggy begin to realize that the show doesn’t need slick gimmicks, and they make their crew a bigger part of the show. Meanwhile, Denise suspects that Kermit might still have feelings for Piggy. Also, Piggy brings home a penguin who starts to bond with Uncle Deadly. 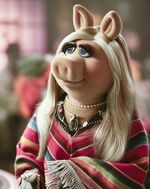 Add a photo to this gallery
Retrieved from "https://muppet.fandom.com/wiki/Episode_111:_Swine_Song?oldid=1174781"
Community content is available under CC-BY-SA unless otherwise noted.