You have reached the cached page for https://www.rottentomatoes.com/m/the_gunman_2015
Below is a snapshot of the Web page as it appeared on 1/27/2021 (the last time our crawler visited it). This is the version of the page that was used for ranking your search results. The page may have changed since we last cached it. To see what might have changed (without the highlights), go to the current page.
You searched for: The Gunman movie We have highlighted matching words that appear in the page below.
Bing is not responsible for the content of this page.
The Gunman (2015) - Rotten Tomatoes
Home
Top Box Office
Tickets & Showtimes
DVD & Streaming
TV
News 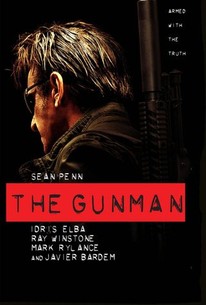 With an uninspired plot and rote set pieces that are overshadowed by its star's physique, The Gunman proves a muddled misfire in the rapidly aging Over-50 Action Hero genre.

Eight years after fleeing the Congo following his assassination of that country's minister of mining, former assassin Jim Terrier (Sean Penn) is back, suffering from PTSD and digging wells to atone for his violent past. After an attempt is made on his life, Terrier flies to London to find out who wants him dead -- and why. Terrier's search leads him to a reunion with Annie (Jasmine Trinca), a woman he once loved, who is now married to an oily businessman (Javier Bardem) with dealings in Africa.

News & Interviews for The Gunman

Critic Reviews for The Gunman

Audience Reviews for The Gunman