You have reached the cached page for https://www.amazon.com/Girl-Spiders-Web-Claire-Foy/dp/6317582041
Below is a snapshot of the Web page as it appeared on 1/26/2021 (the last time our crawler visited it). This is the version of the page that was used for ranking your search results. The page may have changed since we last cached it. To see what might have changed (without the highlights), go to the current page.
You searched for: The Girl in the Spider's Web movie We have highlighted matching words that appear in the page below.
Bing is not responsible for the content of this page.
Amazon.com: The Girl in the Spider's Web: Claire Foy, Sverrir Gudnason, Lakeith Stanfield, Sylvia Hoeks, Stephen Merchant, Claes Bang, Christopher Convery, Vicky Krieps, Fede Alvarez, Amy Pascal, Scott Rudin, Berna Levin, Elizabeth Cantillon, Ole Søndberg, Søren Stærmose, Eli Bush, Sony Pictures Entertainment (SPE): Movies & TV 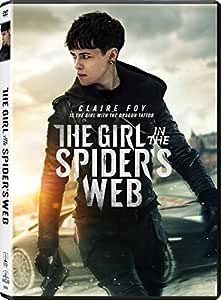 The Girl in the Spider's Web

The Girl in the Spider's Web

Fired from the National Security Agency, Frans Balder recruits hacker Lisbeth Salander to steal FireWall, a computer program that can access codes for nuclear weapons worldwide. The download soon draws attention from an NSA agent who traces the activity to Stockholm. Further problems arise when Russian thugs take Lisbeth's laptop and kidnap a math whiz who can make FireWall work. Now, Lisbeth and an unlikely ally must race against time to save the boy and recover the codes to avert disaster.

Claire Foy (“The Crown”) stars in a new Dragon Tattoo story as Lisbeth Salander, the highly-skilled vigilante from the acclaimed Millennium book series. Salander and journalist Mikael Blomkvist find themselves caught in a web of spies, cybercriminals and corrupt government officials, as they race to rescue a dangerous program capable of global destruction held by shadowy figures linked to Lisbeth’s past.

4.5 out of 5 stars
4.5 out of 5
993 global ratings
How are ratings calculated?
To calculate the overall star rating and percentage breakdown by star, we don’t use a simple average. Instead, our system considers things like how recent a review is and if the reviewer bought the item on Amazon. It also analyzes reviews to verify trustworthiness.
Top reviews

Paul AllaerTop Contributor: Classical Music
TOP 100 REVIEWERVINE VOICE
3.0 out of 5 stars Action movie lacking and suffering as compared to the previous "Dragon Tattoo" movies
Reviewed in the United States on November 21, 2018
"The Girl In the Spider's Web" (2018 release; 117 min.) is the latest film about the adventures of Lisbeth Salander. As the movie opens, we see Lisbeth and her sister Camilla as young girls, playing a game of chess, and then confronted by their abusive dad. Lisbeth escapes by jumping through a window. We then flash forward to the present day in "Stockholm", where Lisbeth is hired by a terminated National Security Agency guy to hack a software program that allows an individual direct access to any and all military defense system in the world. Lisbeth succeeds, but along the way incurs the wrath of many people... At this point we are less than 15 min. into the movie but to tell you more of the plot would spoil your viewing experience, you'll just have to see for yourself how it all plays out.

Couple of comments: this is a reboot of the "Dragon Tattoo" movie franchise, which until now included the 3 original Swedish films from 2009 (adopting the 3 original "Millennium" books) and the 2011 US remake of "The Girl With the Dragon Tattoo" directed by David Fincher. While for me the 2011 remake was entirely unnecessary (die to the excellent Swedish original movie), at least Fincher kept the original tone: a dark psychological thriller, helped enormously by Rooney Mara's performance (although nobody is ever going to surpass Noomi Rapace). Now 7 years later, we get this film. I must admit I was skeptical from the start, I mean, the US franchise simply skips books 2 and 3 and instead now brings to the big screen a book that was not even written by the original author of the "Dragon Tattoo" series (Stieg Larsson, who passed away in 2004). To complicate matters further, the original 2011 US cast is dumped altogether, even though Rooney Mara made it very clear that she was very much game for retaking the Lisbeth Salander role. Instead we now get Claire Foy, whom we just saw in "First Man". While Foy does an admirable job, at no time can she replace Mara (let alone Rapace). But more disappointing is that what once was a dark and brooding book and movie franchise, this is now an action movie, nothing more, nothing less. Think James Bond for the 21st century. In fact, the opening credits montage is VERY MUCH like a James Bond movie, as is the overall approach to character development (slim to none). And all the plot points all get a clear resolution by the end. Of course. No expense was spared for this film, and it all eyes nicely, but the bottom line is that this film lacks and suffers as compared to the previous "Dragon Tattoo" films.

"The Girl In the Spider's Web" opened a few weekends ago, and has decidedly underwhelmed at the box office. I finally got around to seeing it this week. The Tuesday early evening screening where I saw this at was attended dismally (3 people including myself). Given the film's big budget and meager box office return, it is not clear whether a next "Dragon Tattoo" will be forthcoming. If it were up to me, I'd re-engage Fincher and Mara to adapt Book 2 "The Girl Who Played With Fire" for a US remake. If you liked the earlier Swedish movies or the 2011 US remake of the first film, I'd suggest you keep your expectations for this 2018 movie as low as possible, and then check it out, be it in theater, on Amazon Instant Video, or eventually on DVD/Blu-ray, and draw your own conclusion.

dihinsdong
1.0 out of 5 stars poor choice of the actress to play LISBETH SALANDER
Reviewed in the United States on February 13, 2019
Verified Purchase
claire foy may be a good actress but she is a poor choice to play the strong heroine lisbeth salander. in every scene where there is a conflict, foy's face shows either fear to confront the situation or seems to show a person's helplessness in a given difficult, dangerous situation. when the camera zooms in on her face at such difficult confrontations, problems, she almost is in tears...almost like pleading for help!!!!...unlike noomi rapace who brilliantly played salander. i believe that is why THE GIRL WITH THE DRAGON TATOO PLAYED BY MISS RAPACE was a pleasure to watch...unlike miss foy's. i bought the complete set of THE GIRL WITH THE DRAGON TATOO (EXTENDED EDITION) I AM ABSOLUTELY PLEASED WITH MISS RAPACE'S INTERPRETATION OF THE MAIN CHARACTER.
Read more
25 people found this helpful
Helpful
Report abuse

Willb3452
5.0 out of 5 stars Lisbeth Salander is back.
Reviewed in the United States on November 13, 2018
The Girl With The Dragon Tattoo is my favorite film. It has been a long 7 years since the American reboot of the incredible Swedish film. Nothing will top David Fincher's vision for the series. But to say this follow up is less than would not be doing it justice.

Claire Foy has stepped in the role and she has stolen the show. She has taken the character of Lisbeth and made it her own. It has great action and great cinematography with some pretty stunning shots in the film and some great effects.

I truly hope we see another installment. I feel like fans were already quick to not give this film right when it was announced. I have seen the film twice andi plan on seeing it again before it leaves theaters. I have watched Girl With The Dragon tattoo numerous times on home video and I also plan to do the same when this is released

If you have not seen the film yet please do so. I can promise if you give this a chance you will not be disappointed. Do not listen to the critics whom are being overly harsh of this film.
Read more
47 people found this helpful
Helpful
Report abuse

Jack E. Levic
2.0 out of 5 stars CLAIRE FOY SHINES IN A WEAK MOVIE
Reviewed in the United States on February 11, 2019
Verified Purchase
I'm a fan of Claire Foy and was eager to see her at the new Lisbeth Salander in the MIllennium series. THE GIRL IN THE SPIDER'S WEB is the weakest film in the trilogy and a disappointment. It's hard to keep track of Lisbeth and her convoluted story and background. SPIDER'S WEB tries to further explain what made Lisabeth the violent and vindictive crusader that she is.
There are some great car chaser but I found myself fast forwarding through so much of it. Nothing was keeping my interested in this hard to digest story of cyber criminals bend on global destruction.
The story is set in Sweden so Foy and others speak English with a Swedish accent or so the attempt is made. That alone really weakened the film for me. I just don't know why that makes the story supposedly "real."
THE GIRL WITH THE DRAGON TATTOO was the first and best in the series with the Swedish version being incredible. Rooney Mara in the English version was a close second. Unfortunately, SPIDER'S WEB was a complete disappointment.
Read more
11 people found this helpful
Helpful
Report abuse

Douglas M. Eugley
2.0 out of 5 stars If you loved the book, stay away....
Reviewed in the United States on February 6, 2019
Verified Purchase
I was quite disappointed that this movie version strayed so far away from the story lines of the book - and not just this book but the whole relationship between Lisbeth and her sister, Camilla. This movie opens with them actually being friendly with each other?
Sure, changes are made all the time when producing a book into a movie... I just had a hard time adjusting to all of them (and there were many, and they were major) while watching this movie.
Read more
11 people found this helpful
Helpful
Report abuse
See all reviews