You have reached the cached page for https://www.rottentomatoes.com/m/brothers_grimm
Below is a snapshot of the Web page as it appeared on 10/24/2020 (the last time our crawler visited it). This is the version of the page that was used for ranking your search results. The page may have changed since we last cached it. To see what might have changed (without the highlights), go to the current page.
You searched for: The Brothers Grimm movie We have highlighted matching words that appear in the page below.
Bing is not responsible for the content of this page.
The Brothers Grimm (2005) - Rotten Tomatoes
Home
Top Box Office
Tickets & Showtimes
DVD & Streaming
TV
News 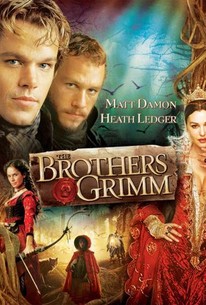 The Brothers Grimm is full of beautiful imagery, but the story is labored and less than enchanting.

The Brothers Grimm, Wilhelm (Matt Damon) and Jacob (Heath Ledger), are dysfunctional schemers who go from town to town putting on shows that convince inhabitants they are getting rid of demons. After one such scam, a mysterious man called Cavaldi (Peter Stormare) brings them to a French general, who persuades them to battle the evil that has kidnapped 10 girls from a small village. During the investigation, the cynical Wilhelm and sensitive Jacob see things that point to real magic at work.

News & Interviews for The Brothers Grimm

Critic Reviews for The Brothers Grimm

Audience Reviews for The Brothers Grimm