You have reached the cached page for https://tvtropes.org/pmwiki/pmwiki.php/Franchise/StreetFighter
Below is a snapshot of the Web page as it appeared on 11/21/2021 (the last time our crawler visited it). This is the version of the page that was used for ranking your search results. The page may have changed since we last cached it. To see what might have changed (without the highlights), go to the current page.
You searched for: Street Fighter movie We have highlighted matching words that appear in the page below.
Bing is not responsible for the content of this page.
Street Fighter (Franchise) - TV Tropes 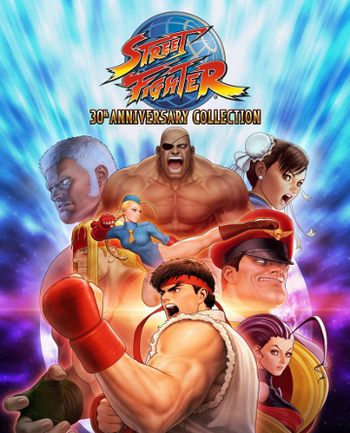 Street Fighter is a long running series of fighting games by Capcom, that have basically defined the genre.

Before Street Fighter, most fighting games were side-scrolling beat 'em ups in the style of Kung Fu Master. Even the relatively few one-on-one fighters that predated the original Street Fighter had, at most, only a handful of characters (only one or two of them playable), and extremely simplistic controls. Street Fighter (specifically its first sequel, Street Fighter II: The World Warrior) gave the genre depth, popularity, and, most importantly, legitimacy. Even modern fighting games cling tightly to the features and tropes innovated by this series.

The series not only has multiple games, but some of them are their own series:

In addition to the normal Street Fighter and Alpha series, Capcom also released a number of partially-related peripheral series, as an attempt to cash in on its success:

The series itself is part of a Shared Universe between a few Capcom games including:

In addition to the aforementioned spin-offs, the series also inspired at least three different animated adaptations, Japanese manga, plus several toylines (one of which was actually mixed in with G.I. Joe). There are also several art books, the latest of which was released in August 2014. College Humor's Street Fighter: The Later Years is a parody of Street Fighter II. There's also Future Cops, a little-known live-action Chinese action/comedy adaptation starring Palette Swap Captain Ersatzes of the main characters.

The innovations and impact of the Street Fighter series can never be overstated, as evidenced by the number of imitators and competitors, not to mention its enduring popularity and fame, seen everywhere from an Easter Egg in Mega Man X to Sabin's Blitzes in Final Fantasy VI.

Outside of the main series, a DLC pack for Asura's Wrath has the title character going up against Ryu, Akuma, Oni, and Evil Ryu, also providing the possibility that Street Fighter takes place thousands of years after Asura's Wrath. Ryu also appears as a downloadable Guest Fighter in Super Smash Bros for Nintendo 3DS and Wii U and as part of the regular roster in Super Smash Bros. Ultimate, where Ken joins in as a Moveset Clone and Guile is a summonable Assist Character. A number of Street Fighter characters are guest fighter in Power Rangers: Legacy Wars, which later lead to Ryu become an original Ranger himself (the Crimson Hawk Ranger). He would later be joined in Legacy Wars by Chun-Li, who also became a Ranger (with the decidedly mundane title of "Chun-Li Ranger"), which would then see both characters arrive in the fighting game Power Rangers: Battle for the Grid in their Ranger identities (with Chun-Li now going by the mantle of the "Blue Phoenix Ranger").

Furthermore, Capcom and Arika's collaboration on the Street Fighter EX series, which was designed as an Alternate Continuity from the main Street Fighter canon from the start, spawned enough memorable characters, music themes, and concepts to branch off into their own series. Around the same time, Arika developed a similar game called Fighting Layer which was published through Namco and featured two characters from the EX series amongst an entirely new cast, to see what they could do without the Capcom characters. Finally, two decades later, the Arika-owned EX cast was revived almost in full through Fighting EX Layer an explicit Spiritual Successor to their late '90s offerings. Canonically, Street Fighter and Fighting EX Layer belong to two different worlds due to the differing companies, while the Arika characters have been given bios on Capcom's new Shadaloo Combat Research Institute profile site. Thus, it can be said that they have two diverging histories following the SFEX games.

You must defeat Sheng Long to stand a chance!

It goes with everything.

It goes with everything.