You have reached the cached page for https://www.amazon.com/Strange-Tobolowsky-Alazraqui-Hennigan-Sheridan/dp/B07FD3VQLV
Below is a snapshot of the Web page as it appeared on 10/13/2020 (the last time our crawler visited it). This is the version of the page that was used for ranking your search results. The page may have changed since we last cached it. To see what might have changed (without the highlights), go to the current page.
You searched for: Strange Nature We have highlighted matching words that appear in the page below.
Bing is not responsible for the content of this page.
Amazon.com: Strange Nature: Stephen Tobolowsky;Tiffany Shepis;Carlos Alazraqui;John Hennigan;Lisa Sheridan, James Ojala: Movies & TV 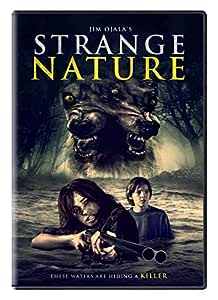 A struggling yet forceful single mother and her shy son start life over by moving in with her estranged hermit father in the backwoods of a small town, just as the locals discover deadly offspring mutations that threaten to spread from animals to humans.

3.6 out of 5 stars
3.6 out of 5
53 global ratings
How are ratings calculated?
To calculate the overall star rating and percentage breakdown by star, we don’t use a simple average. Instead, our system considers things like how recent a review is and if the reviewer bought the item on Amazon. It also analyzes reviews to verify trustworthiness.

Avid reader
TOP 1000 REVIEWER
2.0 out of 5 stars An Ojala family production
Reviewed in the United States on February 24, 2019
Verified Purchase
This movie seems to be a bit over the top with the message it wanted to provide, but for most of the movie, it was all right. It supposedly was based on a true story, but obviously went way overboard. It seems like the Ojala name was on almost everything behind this movie. First of all, the settings and characters seemed rather authentic, which helped sell the movie. I am not sure Duluth was pleased as how their town was shown, as it seemed the seedier parts were shown as she drove through. The defense of the chemical company for their contribution to jobs and the economy is a story that has been told many times before. There was a good laugh when the meal with the school guy's mother was shown, as they were eating Spam with syrup. And it seemed wardrobe for Kim, the main character, was cheap, as it seemed she was wearing the same thing in every scene. For most of the movie, I was willing to give it three stars; then they got into the attack on the deformed man, and the deformed animal attack that I felt was totally unnecessary. That cost it a star for me in the rating. Other than the deformed frogs, which has happened, the scenario of showing the circulation of the parasites through the algae and snails and birds back into the water was the most scientifically accurate part of the movie.
Read more
3 people found this helpful
Helpful
Comment Report abuse

Bureau
3.0 out of 5 stars "Swamped" With B-Plots
Reviewed in the United States on March 3, 2019
Verified Purchase
Going to be honest: I watched this expecting some good, old fashioned killer mutant amphibian action in my home state of Minnesota. I didn't expect a subplot about a dying grandfather. Or another subplot about prejudice against people with birth defects. Or another subplot about a doubting mayor who, in the end, doesn't really do anything. Or a b-plot romance that, again, fizzles out and goes nowhere. Do they all tie into the main plot? I really can't say, as the main theme seems to be "pollution bad," and I guess maybe Grandpa's cancer could be pollution, and maybe DDT caused the mayor's hair loss, so the sky's the limit really.

One slightly less relavent point that really bugged me about this film was its lack of anything to do with its setting. Duluth Minnesota is, first off, not a "small town." While not a metropolis like the Twin Cities, it's definitely one of the bigger hubs in Minnesota, and if you're going to set your movie there maybe use a few setpieces other than the waterfront. Also, having lived here 40+ years, I can tell you that our rednecks are far different than your stock Southern Deliverance stereotypes. They, first off, have minimal uses for wifebeaters and baseball caps, living in a region where it's only above 70 a few months of the year, and tend more flannels and ear flaps. They also don't have outhouses on year round dwellings as we spend a majority of the year in the single digits or below. In short, think less Jeff Foxworthy, more Red Green.

Still, this was a minor concern compared to the fact that mutant whatnots seemed to have been the most minor of B-plots in this B-plot family reunion. That said, the film, though a bit ham-fisted in its message, was generally well written, the acting was competent and the plot paced well enough to keep my attention. For something free you could do worse.

Admiral Eric
4.0 out of 5 stars Very Good Syfy with Real World Twist
Reviewed in the United States on February 14, 2019
Verified Purchase
For a low budget B syfy movie, this was very well done with Great sfx, acting, filming, directing, etc. The script was well thought and even the science was real-world, though simplified for the sake of the movie. Yes, there really are six legged mutated frogs hopping around, especially soon after chemical spills and algae blooms caused by fertilizer spills. Just give your local District Biologist at your state's Dept of Natural Resources a call and listen to some of nature's birth defect stories. Two-headed critters are a stretch, but it has happened up the food chain. The movie does a great job spinning a tale of how human imagination and emotion runs wild when the wild things aren't running properly. And, tells a truth that we are responsible for taking proper care of ourselves through our resources.
Read more
2 people found this helpful
Helpful
Comment Report abuse

Greystoke
VINE VOICE
3.0 out of 5 stars Envirotard Movie, With One Redeeming Scene
Reviewed in the United States on February 27, 2020
Verified Purchase
The envirotardacus-maximus concept is so greatly overdone that it really does detract from the movie in a major fashion.
It really appeared that when the writer got stuck and couldn't come up with dialogue, he went back to hammering the enviro-whacko issue. That got tiresome fast.

My best guess is a budget of something less than $100K for the entire mess.

The "Killer Frogs" turn out to not be frogs though, and sadly, the one scene with a nearly clear shot of the "killer" critter is not very clear at all.

The premise of the movie is sufficient to work with, however, the writer/director and probably clean-up crew too, James Ojala simply never quite did much with it.

The main character Kim is badly overacting the part of a washed up, has been, one hit pop star 'going home'.

With all of that though, there is one scene which has redeeming value. At 1:33:28 in the timeline, is the best scene of the whole movie. Do NOT miss that!
Read more
Helpful
Comment Report abuse

Carmen Iris
2.0 out of 5 stars Why a headline?
Reviewed in the United States on March 13, 2019
Verified Purchase
I'm wondering where this movie supposedly took place, Louisiana, Minnesota? (The actress was from Georgia and lived in New Orleans, I guess she couldn't figure out how to play a hick from Minnesota and chose hick from Louisiana, even to an outfit from her own wardrobe.) Totally different. (I live in Minnesota, and really like New Orleans.) Not a single "fer shur" (spelled 'for sure')? By the way Duluth is not too similar to the bayou, they should have named the town Henderson, like where it was actually based. Kidding aside, never liked this actress, especially when she would start doing the thing with her lips. This was a REAL important issue and somehow ended up as another "dumb Red Necks movie genre". At least most of those movies don't take themselves seriously and are actually funny. I gave it a two because I felt sorry for the puppies. The father? 100% dumb Red Neck (not that I dislike Red Neck people, just the really dumb ones) I kept wanting to vomit.
Read more
Helpful
Comment Report abuse
See all reviews