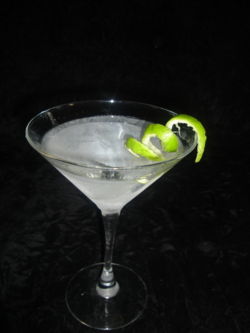 A martini served straight up.

In bartending, the term straight up (or up) refers to an alcoholic drink that is shaken or stirred with ice and then strained and served without ice in a stemmed glass.[1]

This is contrasted with a drink served neat – a single, unmixed liquor served without being chilled and without any water, ice, or other mixer.[1][2] Neat drinks and rocks drinks are often served in a rocks glass but may be served in a shot glass or a cocktail glass.

The term "up" is less ambiguous than "straight up", because sometimes the term "straight up" is used to mean "neat".[2]

The term "straight" is also sometimes ambiguous, as it can be used to mean either "up" or "neat".[2] 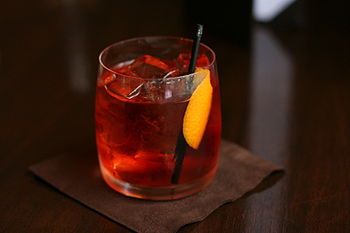 A negroni cocktail served on the rocks.

There is substantial confusion in the usage of "neat", "straight up", "straight", and "up".[2] In the context of describing ways of serving a drink, all of these mean "served without ice," but some bar patrons and bartenders use them inconsistently.

"Neat" and "up" are relatively unambiguous; the term "neat" means "a single, unmixed liquor at room temperature", and "up" means "chilled and served without ice in a cocktail glass."[2]

"Straight" is often used interchangeably with "neat" (in the United Kingdom, Canada, and the United States). However, "straight" is also often used to refer to a spirit that is in an unmixed state in general, in addition to being used to describe a way of serving it. For example, many Bourbons are identified as "Kentucky Straight Bourbon Whiskey" on their bottling labels, and U.S. Federal law contains a legal definition of the term "straight whiskey". So sometimes "straight" may be used to mean either "straight up" (as defined above) or "neat", and clarification may be needed to determine the exact manner for serving it.

"On the rocks" refers to liquor poured over ice cubes.

Cocktails are generally served chilled, although some (e.g., margaritas) may be served either with or without ice, and this must be specified.

Unmixed liquors may be served either neat, up, or on the rocks, with differing conventions. Expensive whisky and other aged liquor is most often served neat, while cheap whisky is usually served on the rocks. Vodka is sometimes served chilled.

A shot of whisky, tequila, or vodka is typically served neat in a shot glass, often with a chaser (a mild drink consumed after a shot of hard liquor).

All translations of straight up bartending