A depleted Scotland earned promotion to the top tier of the Nations League - and a Euro 2024 play-off place - after a defensively disciplined and brave display clinched the point they needed against Ukraine.

But profligacy and some wonderful goalkeeping from Craig Gordon earned a vital point which sealed Scotland top spot in Group B1.

It also capped an impressive turnaround for the national side after the disappointment of losing to Ukraine in June's World Cup play-off, and puts them into Pot 2 for the qualifying draw for the European Championships on 9 October.

That enhances Scotland's chances of another major tournament, which is a great reward for an impressive international window in which Clarke's squad has shown different qualities while being stretched to the limit.

Injuries to defenders Scott McKenna and Kieran Tierney added more problems before the trip to Krakow, and resulted in Hibernian centre-back Ryan Porteous making his debut in game of huge importance.

But he, partner Jack Hendry, and Aaron Hickey were outstanding in keeping Ukraine out for the most part, though Oleksandr Petrakov's side will also rue some big misses. 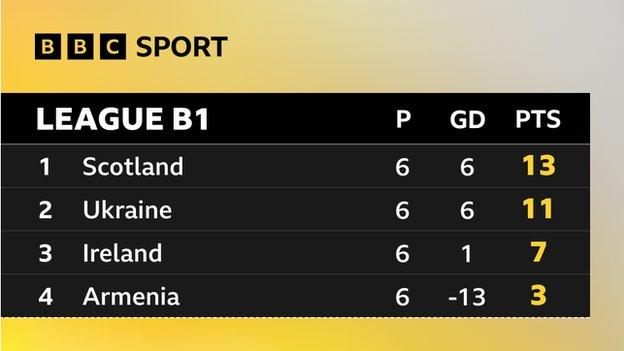 The worst came from Andriy Yarmolenko after just seven minutes, as the former West Ham midfielder blazed over unmarked after a fantastic cross from Mykhaylo Mudryk.

But there were others too, with Gordon denying Artem Dovbyk when clean through, and then Mudryk's curling effort from distance was pushed wide by the Hearts goalkeeper.

Scotland had some good moments early on, with Che Adams forcing Andriy Lunin into a fine save after two minutes and Ryan Jack firing over inside the box. A penalty awarded for handball was overturned, too, after the referee checked again at the monitor at the direction of the video assistant referee.

But the second half was mainly about tiring bodies staying focussed, which they did until the death as Porteous produced a last-ditch tackle in the final minute to stop Oleksandr Zubvok firing a shot on goal from just inside the box.

Player of the match - Aaron Hickey

Clarke was visibly delighted as he shared an embrace with his staff at full-time, having guided his team from deflation in the summer, through a physically demanding window to Nations League promotion.

It all demonstrated Scotland's depth, versatility, and the head coach's ability to ensure every player in the squad knows their role, having switched from a back five to 4-3-3 or 4-2-3-1 formation for these three games.

But despite that, Scotland coped. Hickey was magnificent again, and Porteous was almost flawless alongside Hendry on his debut. Arguably none of that trio were first choice last Monday.

In the 3-0 win against Ukraine, Scotland showed their ability to play on the front foot at high intensity; against Ireland they demonstrated nous to come from behind in tough circumstances; and the return against Ukraine was about good organisation, focus, and heart.

With the best collection of players in 25 years, a Pot 2 seeding and a fall-back play-off if needed, Scotland are in an amazing position to reach back-to-back European Championships. How they've earned it this week.

Shots on Target
Home3
Away1

These comments are now closed.