You have reached the cached page for https://www.amazon.com/BRAVE-NEW-WORLD-Stephen-Hawking/dp/B008MPQ0UE
Below is a snapshot of the Web page as it appeared on 9/27/2020 (the last time our crawler visited it). This is the version of the page that was used for ranking your search results. The page may have changed since we last cached it. To see what might have changed (without the highlights), go to the current page.
You searched for: Stephen Hawking's Brave New World We have highlighted matching words that appear in the page below.
Bing is not responsible for the content of this page.
Amazon.com: BRAVE NEW WORLD: Hawking, Stephen: Movies & TV 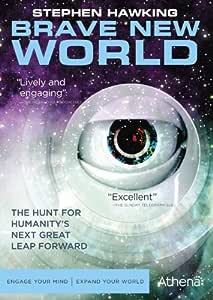 The hunt for humanity’s next great leap forward

Thrilling advances in science today are heralding the breakthroughs of tomorrow. Hosted by Professor Stephen Hawking, this five-part series travels the globe to explore the amazing research and awesome inventions that will change the course of our world.

A stellar cast of notable scientists joins Hawking on this adventure, including naturalist David Attenborough, evolutionary biologist Richard Dawkins, physicist Kathy Sykes, and reproductive-medicine pioneer Robert Winston. They offer expert commentary on the revolutions that will improve, extend, and forever transform our lives. From brain-controlled wheelchairs to cancer-destroying bacteria and from self-driving cars to the power potential in a single atom, an almost unimaginable future is becoming reality.

Cambridge professor, bestselling author, and Presidential Medal of Freedom winner Stephen Hawking is a renowned physicist famed for his work on black holes and his efforts to explain scientific theories to lay audiences.

3.2 out of 5 stars
3.2 out of 5
5 global ratings
How are ratings calculated?
To calculate the overall star rating and percentage breakdown by star, we don’t use a simple average. Instead, our system considers things like how recent a review is and if the reviewer bought the item on Amazon. It also analyzes reviews to verify trustworthiness.
Top reviews

sheponline
4.0 out of 5 stars gift for dad
Reviewed in the United States on May 9, 2013
Verified Purchase
I bought this for my dad for XMAS and we watched it together while I was home for XMAS. The material that their working on and the technological boundaries that they're breaching are fascinating and uplifting to see. The human race might survive after all :)
Read more
3 people found this helpful
Helpful
Comment Report abuse

Harold Wolf
TOP 1000 REVIEWER
5.0 out of 5 stars Science newest findings and bold directions headed
Reviewed in the United States on September 23, 2012
Entertaining story of discoveries through scientists' eyes. Presented at a layman's level. Magnificent footage and several interesting scientist presenters for each segment. See how science is a force for good. "Prepare to see your future" as one said. You need not have the intelligence of top scientists to enjoy this series. Even good for youth, educational, but kids will find it enthralling.

A layman's understandable look at science potential of the 21st century. A must for any educational library.