You have reached the cached page for https://www.rottentomatoes.com/m/star_trek_first_contact
Below is a snapshot of the Web page as it appeared on 3/4/2021 (the last time our crawler visited it). This is the version of the page that was used for ranking your search results. The page may have changed since we last cached it. To see what might have changed (without the highlights), go to the current page.
You searched for: Star Trek: First Contact 1996 We have highlighted matching words that appear in the page below.
Bing is not responsible for the content of this page.
Star Trek: First Contact (1996) - Rotten Tomatoes
Home
Top Box Office
Tickets & Showtimes
DVD & Streaming
TV
News 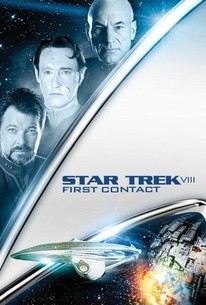 While fans of the series will surely appreciate it, First Contact is exciting, engaging, and visually appealing enough to entertain Star Trek novices. Read critic reviews

The Enterprise and its crew follow a Borg ship through a time warp to prevent the Borg from taking over the Earth in a past era. Stuck in the past, Geordi La Forge (LeVar Burton) helps a pioneer of space travel (James Cromwell) in his efforts to create the first warp drive while Capt. Picard (Patrick Stewart) and Cmdr. Data (Brent Spiner) battle the Borg Queen (Alice Krige) as she tries to take over the Enterprise.