You have reached the cached page for https://www.amazon.com/Shrek-Full-Screen-Mike-Myers/dp/B0002TUCRU
Below is a snapshot of the Web page as it appeared on 10/26/2020 (the last time our crawler visited it). This is the version of the page that was used for ranking your search results. The page may have changed since we last cached it. To see what might have changed (without the highlights), go to the current page.
You searched for: Shrek 2 movie We have highlighted matching words that appear in the page below.
Bing is not responsible for the content of this page.
Amazon.com: Shrek 2 (Full Screen Edition): Mike Myers, Eddie Murphy, Cameron Diaz, Antonio Banderas, Julie Andrews, John Cleese, Rupert Everett, Jennifer Saunders, Andrew Adamson: Movies & TV 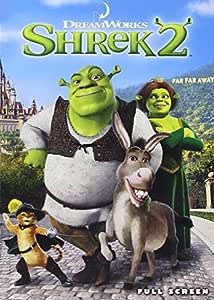 After returning from their honeymoon and showing "home movies" to their friends, Shrek and Fiona learn Fiona's parents have heard their daughter has married her true love and wish to meet the husband and invite him to their kingdom, called Far Far Away. The catch? Fiona's parents are unaware of the curse that struck their daughter and assumed she married Prince Charming so are a bit shocked to learn thier son-in-law is a 700-pound ogre with horrible hygeine and a talking donkey.

4.8 out of 5 stars
4.8 out of 5
7,770 global ratings
How are ratings calculated?
To calculate the overall star rating and percentage breakdown by star, we don’t use a simple average. Instead, our system considers things like how recent a review is and if the reviewer bought the item on Amazon. It also analyzes reviews to verify trustworthiness.

Robert
1.0 out of 5 stars VIEWER BEWARE 24 HOURS TO WATCH
Reviewed in the United States on November 4, 2018
Verified Purchase
I rented this video to watch with my 3-year-old daughter who sits and watches movies in three or four separate viewings because she has trouble sitting still for an entire film. Unlike every other movie I've rented from Amazon which gave us 48 hours, we were only allowed to watch Shrek 2 for 24 hours. When we sat down to finish the last 20 minutes, our time had expired.
Read more
18 people found this helpful
Helpful
Comment Report abuse

R. Eliker
5.0 out of 5 stars This may be my favorite Shrek movie
Reviewed in the United States on March 22, 2018
Verified Purchase
This may be my favorite Shrek movie, mostly because of the introduction of Puss in Boots. The kids love it, I laugh incredibly hard, and it's quickly becoming a family favorite! Love the Shrek series!
Read more
10 people found this helpful
Helpful
Comment Report abuse

JESSICA
4.0 out of 5 stars No digital download.
Reviewed in the United States on January 10, 2019
Verified Purchase
My daughter is mesmerized with all things Shrek so this blu-Ray dvd was a necessary addition to our collection. Took away one star because although it states “DVD, Blu-Ray, and Digital Download”, the digital download redemption code expired May 2018. We received the DVD in December 2018 so we were way out of the time frame at no fault of our own. Oh well! Still a great movie !
Read more
4 people found this helpful
Helpful
Comment Report abuse

Grace Outta Book Room
5.0 out of 5 stars 🎶 “Accidentally in Love...”🎶
Reviewed in the United States on July 23, 2020
Verified Purchase
Glad to add this to my collection. I was missing Shrek 2 although I had the other 3 Shrek movies. I ordered a used DVD through a third party seller on amazon and it came as described. Happy with the delivery time too.

This is a cute sequel to Shrek, that manages to introduce one of the series most memorable characters: Puss in Boots. Shrek, Fiona and Donkey travel to Fiona’s home kingdom to meet her family. Uncovering of family secrets, a plotting fairy godmother, magic and fairytale mayhem ensue. Recommended for kids/families who like fast paced, humorous, cartoons which include the pop music of its day.
Read more
One person found this helpful
Helpful
Comment Report abuse

Daniel Jolley
HALL OF FAMEVINE VOICE
5.0 out of 5 stars You can take the ogre out of the swamp ...
Reviewed in the United States on May 22, 2005
Verified Purchase
More lavish animation, more unforgettable characters, more great songs, more sharply intelligent wit and comedy - all that and more goes into this sequel to the wildly successful Shrek. The look and feel of this film really are incredible and amazingly realistic, especially in terms of all the human characters. Unlike most films built upon a unique, breathtaking visual style, though, Shrek 2 relies upon a strong and compelling plot for its greatest success. Even though the first film introduced us to Shrek-oriented parodies of fairy tales, motion pictures, music, and pop culture in general, the script still works its magic by consistently surprising and delighting the audience. It's a worthy successor to a blockbuster of a film - although I still liked the first film better. Aye, I laughed pretty much from beginning to end during Shrek 2, but the film lacked some of the truly gut-busting comic antics of the original.

Do I really need to rehash the plot here? Shrek's and Fiona's newfound happiness together is put to the test when Shrek's royal in-laws, the king and queen of Far Far Away, invite their daughter and her new husband home for a marriage celebration. The folks expect Prince Charming, of course, and are less than prepared for the ogre factor. Prince Charming is none too happy, either, and his mother the glamorous Fairy Godmother (you just can't trust a fairy godmother anymore these days) sets out to right the wrong caused by Shrek's unexpected rescue of Fiona. The king is a willing accomplice, even going so far as to contract a hit on Shrek with the renowned feline assassin Puss in Boots. In order to keep Fiona, Shrek makes the ultimate sacrifice, turning himself into a handsome man, but the Fairy Godmother thwarts him at every turn. Even with the help of his friends from back home in the swamp, it looks like the honeymoon - and marriage itself - is over.

Everyone seems to be wild about Antonio Banderas as Puss in Boots, and he does make a great addition to the Shrek universe. The heart of Shrek, however, still remains in the able voices of Mike Myers, Cameron Diaz, and Eddie Murphy. It's pretty simple, really - if you enjoyed Shrek, you will certainly enjoy Shrek 2. The extras on the DVD add even more delight to the Shrek 2 experience. The Far Far Away Idol contest is a brilliant addition. You get not one but two filmmaker commentaries (but, sadly, no commentaries with any of the actors), and several looks at the making of the film are also worthy of your time. The rest of the special features are a little less impressive than they look, however - several of them basically just take you to selected scenes from the film itself. Still, there's plenty here to occupy your time and magnify the entertainment value of an ingenious film all but guaranteeing a good time for one and all.
Read more
13 people found this helpful
Helpful
Comment Report abuse

Dine Fuss
5.0 out of 5 stars A Charismatic Film That Enchants the Audience...
Reviewed in the United States on July 25, 2004
Verified Purchase
Shrek 2 is an extraordinary well-made sequel to the first film as it smoothly transitions from where the first film left off. The ogre Shrek (Mike Myers's voice) and Princess Fiona (Cameron Diaz's voice) are now married and have returned from a blissful honeymoon where they have pampered each other with love. Shrek who never before has experienced love is in full force trying to catch up for what he has missed before. When they return to their love nest in the swamp the pleasure bubble of love suddenly bursts as Princess Fiona's parents insist on having a ball for the newlyweds in the Kingdom of Far Far Away.

Princess Fiona was once human and due to a curse she turned into an hideous ogre by night and a stunning beauty by day. The curse led Princess Fiona's parents to hide her in a castle guarded by a dragon where only Prince Charming could rescue her. However, Shrek beat Prince Charming to it and sealed the curse by kissing Princess Fiona, which turned her permanently into an ogre. This presents some issues for Shrek as he is well aware of how the world looks upon his kind, with an axe in one hand and a torch in the other. Having this in mind, Shrek refuses to travel and meet Fiona's human in-laws, which leads the married couple into their first argument. Shrek rapidly learns that he can no longer act the way he once did as it will only sour his relationship with his beloved Fiona, which means that he must begin to listen.

As in the first episode of Shreks adventures the audience is to experience an enlightening and hilarious journey with Shrek and his companion, the talkative and histrionic Donkey (Eddie Murphy's voice). This time around Shrek faces new challenges as he must confront family issues, stereotypes, mysterious assassins, love quarrels, political issues, and moral dilemmas in the Kingdom of Far Far Away. All these heavy issues are skillfully balanced with heart-warming and belly-aching comedy, which will enchant a wide range of audiences with its charisma.
Read more
9 people found this helpful
Helpful
Comment Report abuse
See all reviews

Sirius
5.0 out of 5 stars Buy in Region 1
Reviewed in the United Kingdom on July 12, 2018
Verified Purchase
I have bought two of these from Amazon UK, July 2018 and October 2019. One from HMV (replaced) and every one has had a coloured stripe running down the right hand side of the picture. So have now bought one in Region 1 from Amazon US and it plays perfectly. DreamWorks, get your act together.
Read more
2 people found this helpful
Report abuse

Carl West
5.0 out of 5 stars Great family film
Reviewed in the United Kingdom on November 27, 2017
Verified Purchase
Excellent family entertainment, good follow up to the first film. Got it for under £4 which was well worth it! All the original voices are in it, plus new characters. Jennifer Saunders steals the show as the fairy godmother! They've animated her really well and her signing bonnie Tyler's holding out for hero is very impressive!
Well recommended
Read more
One person found this helpful
Report abuse

Sue Male
5.0 out of 5 stars Love Shrek
Reviewed in the United Kingdom on November 2, 2019
Verified Purchase
Bought for grandchildren to enjoy
Read more
One person found this helpful
Report abuse

Claire H.
5.0 out of 5 stars Super service
Reviewed in the United Kingdom on August 21, 2020
Verified Purchase
Bought as a gift, this item was delivered, in good condition, to the recipient wellwithin stated timeframe. Thank you.
Read more
Report abuse
See all reviews

Page 1 of 1 Start overPage 1 of 1
This shopping feature will continue to load items when the Enter key is pressed. In order to navigate out of this carousel please use your heading shortcut key to navigate to the next or previous heading.
Back
Next
Pages with related products. See and discover other items: shrek 4