You have reached the cached page for https://www.amazon.com/Shackletons-Antarctic-Adventure-Kevin-Spacey/dp/B00006FMCA
Below is a snapshot of the Web page as it appeared on 11/21/2020 (the last time our crawler visited it). This is the version of the page that was used for ranking your search results. The page may have changed since we last cached it. To see what might have changed (without the highlights), go to the current page.
You searched for: Shackleton's Antarctic Adventure movie We have highlighted matching words that appear in the page below.
Bing is not responsible for the content of this page.
Amazon.com: Shackleton's Antarctic Adventure: Kevin Spacey, Conrad Anker, Iain Fraser, Michael Gambon, Ciarán Hinds, Denis Lill, Patrick Malahide, Reinhold Messner, Bob Sherman, Brett Swain, Stephen Venables, George Butler, George Butler, Kelly Tyler, Lila Nejad, Louise Rosen, Scott Swofford, Steve Stoke, Crystal V. Spijer, Mose Richards: Movies & TV 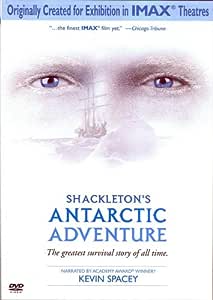 One of the greatest survival stories of all time comes to life in this extraordinary true story of polar explorer Sir Ernest Shackleton's 1914-1916 British Imperial Trans-Antarctic Expedition, a testament to heroism and human endurance. All 28 men survived nearly two years in the barren, frigid Antarctic when their ship was caught in pack ice and eventually crushed. Featuring stunning Antarctic images and recreations plus original still photography and 35mm motion picture footage by Rank Hurley, the official photographer for the expedition, this is a voyage you'll want to relive again and again.

Of the many films that have chronicled Ernest Shackleton's team's legendary trans-Antarctic expedition and their struggle for survival, Shackleton's Antarctic Adventure is the only documentary that traces the actual steps of the explorers' blessed journey. While providing a concise summary of the Shackleton team's 1914-16 expedition, this breathtaking IMAX feature employs exacting re-creations and flyover footage (from 1999 and 2000) of the same harsh landscapes that Shackleton and his men traversed, by land and sea, during their ill-fated voyage. As with most IMAX films, climactic moments are driven by a bombastic score (how many swollen crescendos can one movie handle?), and the harshest facts of the Shackleton journey (e.g., sacrificing beloved dogs for food and euthanasia) are omitted for family viewing. That's a condescending compromise, and the gravitas of Kevin Spacey's narration is a bit overstated. What matters here are the visuals (both vintage and contemporary), and they're absolutely magnificent, conveying the sheer horror--and divine beauty--of the greatest survival story of all time. --Jeff Shannon

The initial shipment of the DVD release of Shackleton's Antarctic Adventure had a defective Dolby Digital track, which was corrected for all subsequent manufacturing. The DTS track was always properly synched.

...a must-see for anyone already hooked on this story, and a good starting point for everyone else. -- Boston Herald

...every bit as exciting as a commercial epic. -- New York Times

4.2 out of 5 stars
4.2 out of 5
41 global ratings
How are ratings calculated?
To calculate the overall star rating and percentage breakdown by star, we don’t use a simple average. Instead, our system considers things like how recent a review is and if the reviewer bought the item on Amazon. It also analyzes reviews to verify trustworthiness.
Top reviews

R. Burns
5.0 out of 5 stars Wonderfully produced film! However, Amazon has defective editions.
Reviewed in the United States on March 17, 2009
Verified Purchase
This film is incredible!! Unbelievably beautiful, with a great musical score!! Correction, though -- Kevin Spacey is NOT an actor in this film, he's the narrator. There are no real "actors"...the crew and the 3 mountaineers portrayed the original Endurance crew, and did a great job!

I've had my initial copies for 2-3 years, which have the blue dot on back (meaning the corrected Dolby track), and also an inside cover slip with a night photo of The Endurance, and a list of Scene Selections.

Amazon assured on its site that they sell only the corrected, blue dot, versions of the film, so I ordered 2 more as gifts, and 5 to have on hand for friends and such. And AMAZON is the vendor...not someone outside of Amazon.

The copies that I just received from Amazon are NOT the corrected blue dot versions, nor do they have the inside slip cover with photo and scenes.

I emailed customer service (I couldn't understand the foreign accent of the rep that answered my phone call), and they assured me that they would overnight replacements, and I could then send the "wrong ones" back. (I was afraid that this choice of words spelled trouble, and this proved true.)

The replacements came today, and THEY TOO ARE THE DEFECTIVE VERSIONS! I have now inquired of a completely different vendor (outside of Amazon), to see if THEIRS are the corrected version. I'll send ALL 12 of these defective ones back to Amazon, since I can't seem to talk (or email) with anyone who understands the issue.

I've had great success with Amazon for years...but the fact that they appear to outsource their service to a foreign country is not only disappointing, but frustrating as well. The level of understanding simply isn't there.

But the film is INCREDIBLE, and everyone should see it!!!
Read more
5 people found this helpful
Helpful
Comment Report abuse

Andrew Smith
5.0 out of 5 stars Excitement, Adventure, and Meaning
Reviewed in the United States on April 8, 2019
Verified Purchase
This movie is riveting! I was absolutely glued to the screen. But it has more than mere action: there is a deep lesson about character and perseverance.
Read more
Helpful
Comment Report abuse

mya campbell
5.0 out of 5 stars True and exciting
Reviewed in the United States on January 14, 2020
Verified Purchase
Loved this dvd. Amazing what the men went through so long ago.
Read more
Helpful
Comment Report abuse

billsensei
4.0 out of 5 stars Good but there is better...
Reviewed in the United States on January 28, 2004
Verified Purchase
I watched this and although thoroughly enjoyed it, agree that it is a bit too short even for an IMAX. I then watched the 3 DVD collector's set and sat riveted to my seat for almost 5 hours watching both the film and the history of Antarctic Exploration extras. So, if you want the IMAX version, which is short and sort of sweet to the point, then here it is. On the other hand, if you want to really get a feel for the whole adventure and become part of it, then get the 3 DVD box set. I will watch both again and again. Just an unbelievable story whichever version you watch.
Read more
One person found this helpful
Helpful
Comment Report abuse

JimDandie98
5.0 out of 5 stars Wow! Talk About a Survivor
Reviewed in the United States on January 25, 2013
Verified Purchase
It is hard to believe that this is a true story. A story of "if it weren't for bad luck" that worked out in the end. The amazing story is well done with actual footage, stills and re-enactments that put you in Antarctica and an excellent narration by Kevin Spacey.

One interesting note: an indicator of Global Climate Change can be seen in the retracing of Shackleton's trek across across South Georgia.
Read more
One person found this helpful
Helpful
Comment Report abuse

ABSea
5.0 out of 5 stars AWESOME!!
Reviewed in the United States on August 9, 2011
Verified Purchase
My 4 year-old's review: "BUY IT BUY IT BUY IT! It's great. Now GET IT!" My take: This was her first IMAX movie and then she had to have it to watch over and over. Well made and not at all scary. No mention, for example, of what happened to all the sled dogs. (Presumably eaten.) It's only 40 minutes long and great for a child with an interest in science and adventure. There is even an interactive quiz at the end.
Read more
One person found this helpful
Helpful
Comment Report abuse

ChandraShekhar
5.0 out of 5 stars Sets very high standards of Human Courage and Endurance
Reviewed in the United States on March 26, 2005
Verified Purchase
A very inspiring concept executed very well by Imax. Full marks to them for doing so. Team leader Shackelton and his team of 27 men start from South Georgia for antarctic trip. Their ship is trapped in snow and they are forced to disembark. Hope to recover the ship as the ice melts keeps them near it for 4 months and tragically as the ice starts melting after 4 months it shatters and drowns the ship. Starting a journey on lifeboats and touching different grounds of ice and leaving so many of colleagues at different places, Shackelton finally reaches the land after 17 months and manages to go back with some help and get back all his men. A masterpiece of human courage and endurance that is very rarely seen. A must see
Read more
4 people found this helpful
Helpful
Comment Report abuse

Phil Kleinheinz
5.0 out of 5 stars Leadership at its best
Reviewed in the United States on February 11, 2010
Verified Purchase
This is an excellent docudrama that serves as one of the all time great case studies in Leadership. Rarely in the history of man is there a more impressive example of leadership during a crisis. Shackleton's twenty-two month journey is a testament to the importance of values, vision and mission. This video is a just presentation of Shackleton's unbelievable accomplishments.
Read more
Helpful
Comment Report abuse
See all reviews