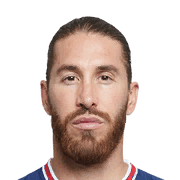 His real-life stats are currently 0 goals and 0 assists in 8 matches in domestic competition. He also received 2 yellow cards and 0 red cards.

Such a bargain, i have tried out most good CB's this year to find a player i really liked, and Ramos is that player, really only Van dijk and Ramos who i have been satisfied with in every match.

I am yet to try any icon CB, but i think some of the class Cb WITH 70 Will really be worth it this year.

If ramos fit into your squad, forget about Marquinos, kimpempe and so on. i played him first with Marquinos and i really disliked Marquinos, he plays like he wants to be a CDM.

agressiv which i like but often out of position, Ramos is so good at beeing the right place all the time, and unlike players like Gomez, denayer, Manolas and so on, when Ramos tackles, he get the ball.

I have noticed maybe 1 or 2 times doing 30+ matches that he isnt the fastest, but honestly you dont really notice, i love that in this game.

Give him a try, he is a steal for that price. the rating is really true this year, him and Van Dijk is the best gold CB's out there.

I dont even wanna say the pace its really not an issue.

If you want a CB who never fails your expectations on any occasion this is the man. I use him surrounded by fast-paced defenders which makes him a monster. I can not remember to have lost a 1on1 when standing in front of an attacker. He tackles the ball with ease, every single time. I first bought him to bring some better passing from defense, and he absolutely kills it. Compared to Kimpembe which when is on the ball always makes me nervous, Ramos never losses the ball, I'm splitting the opposition with his passes and furthermore, he has a very decent ball control.

I have used an anchor on him, as he is surrounded by fast-paced defenders, and I wanted to make sure that he wins every single physical duel, both on the ground and in the air - and so far it has worked.

General defending (94) - Every aspect of it. Never losses a tackle.

General physicality (90) - A monster in the air, and has made some big winners for me in critical moments.

Short passing and long passing (83,83) - Best passing-defender I have tried

Bal Control (83) - So important when play short from GK

Pace (75) - Only on a few occasions has he's been outrun, but if he catches back up he always gets the ball.

Don't really have other cons, as long as you pair him with a fast defender he will change your game

We have decided to add comments to facilitate communication and interaction between FUTBIN users. We believe and hope that we can build a stable community in FUTBIN and that comments will be a part of it. We have created a guideline, which will help you to understand how to use our comments system.

Violation of the above rules can lead to account closure.