You have reached the cached page for https://www.amazon.com/Searching-Sonny-Jason-Dohring/dp/B008MOCTC8
Below is a snapshot of the Web page as it appeared on 7/30/2020 (the last time our crawler visited it). This is the version of the page that was used for ranking your search results. The page may have changed since we last cached it. To see what might have changed (without the highlights), go to the current page.
You searched for: Searching for Sonny movie We have highlighted matching words that appear in the page below.
Bing is not responsible for the content of this page.
Amazon.com: Searching for Sonny: Jason Dohring, Minka Kelly, Masi Oka, Michael Hogan, Nick Kocher, Clarke Peters, Brian McElhaney, Michael Kagan, Andrew Disney, Andrew Disney, Justin Sanders, Greg Beauchamp: Movies & TV 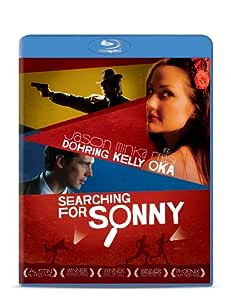 Reunited friends find themselves the chief suspects of a murder mystery that seems oddly similar to a play they performed in high school. Minka Kelly joins Jason Dohring and Masi Oka in this outrageous comedy thriller that critics are calling "wildly entertaining" and "one of the funniest movies I've seen all year.” View the Trailer: http://youtu.be/aGYXp7bBwZo

3.9 out of 5 stars
3.9 out of 5
30 global customer ratings
How does Amazon calculate star ratings?
Amazon calculates a product’s star ratings based on a machine learned model instead of a raw data average. The model takes into account factors including the age of a rating, whether the ratings are from verified purchasers, and factors that establish reviewer trustworthiness.
Top Reviews

Jennifer
3.0 out of 5 stars This was a quirky, enjoyable little film
Reviewed in the United States on September 3, 2012
Verified Purchase
'Searching for Sonny' didn't take itself too seriously and viewers shouldn't either. If you're expecting a film grounded in reality and every day believability, well, you won't find it here. There was some humor, a little drama, a little action, but mostly it was filled with an offbeat absurdity that held a charm of its own. It wasn't a film noir or even a satire of one, but it had elements of such in a broader sense. I bought the film because I'm a huge Jason Dohring fan and it was nice seeing him again. If you're a fan of him, you'll enjoy the film. If you like offbeat quirky indie films you'll probably enjoy the film as well.
Read more
5 people found this helpful
Helpful
Comment Report abuse

Mason Mule
5.0 out of 5 stars An incredibly clever comedy; a movie hasn't made me laugh this much and this loud in a long time.
Reviewed in the United States on August 31, 2012
Verified Purchase
I saw this film on the festival circuit this year and found myself laughing more and louder than I can recall doing in a movie theatre recently; this film and Seth MacFarlane's "Ted" are far and away the two funniest films I've seen all year. The screenplay deliriously twists and turns in ways you never see coming, and that only enhance the comedy. The performances are spot-on across the board, and I was stunned to learn after the screening that this was the director's first feature, given that the filmmaking was so assured, and with a very specific tone and voice that felt like it had been cultivated over time. I look forward to seeing more from him. Give yourself a fun night and check out "Searching for Sonny". I just ordered the blu-ray and am looking forward to seeing it again.
Read more
7 people found this helpful
Helpful
Comment Report abuse

Kelly M.
3.0 out of 5 stars Weird
Reviewed in the United States on August 18, 2019
Verified Purchase
Not great. Only watched this cuz Jason Dohring, from Veronica Mars was in it. Weird.
Read more
Helpful
Comment Report abuse

L.L.
5.0 out of 5 stars Funny, underrated film
Reviewed in the United States on June 21, 2013
Verified Purchase
I bought this because it starred Jason Dohring from Veronica Mars. Hadn't heard anything about it or read any reviews so I watched it without any expectations. Loved it, a quirky independent film, with interesting and memorable characters. The narrator, often overused in movies, was a good element here, adding to the comedic noir tone. Not perhaps for everybody, but those who can appreciate less mainstream films should enjoy this one.
Read more
4 people found this helpful
Helpful
Comment Report abuse

Patrick
4.0 out of 5 stars Searching For Sonny
Reviewed in the United States on April 16, 2015
Verified Purchase
Hey, it's that guy from Veronica Mars!! An enjoyable and quirky movie about a missing person and the efforts to find him all wrapped up in a mystery that isn't really so mysterious. It's a comedy with voice over narration so we don't get confused. I liked it. Oh, and Minka Kelly looks good in red lipstick!!!
Read more
Helpful
Comment Report abuse

Paul
5.0 out of 5 stars Finally something exceptionally funny and original!
Reviewed in the United States on January 8, 2013
Verified Purchase
This movie is a great example of how independent films are making a strong statement that quality can be just as good as the Hollywood level.
I haven't laughed this hard at a movie in a long, long time.
The two actors from Britanick are absolutely hilarious and steal the show!
Would definitely recommend this movie to everyone!

Amazon Customer
4.0 out of 5 stars funny comdy
Reviewed in the United States on October 15, 2016
Verified Purchase
It is funny all cast, lines too!
Read more
Helpful
Comment Report abuse
See all reviews