You have reached the cached page for https://www.rottentomatoes.com/m/rushmore
Below is a snapshot of the Web page as it appeared on 10/28/2020 (the last time our crawler visited it). This is the version of the page that was used for ranking your search results. The page may have changed since we last cached it. To see what might have changed (without the highlights), go to the current page.
You searched for: Rushmore We have highlighted matching words that appear in the page below.
Bing is not responsible for the content of this page.
Rushmore (1998) - Rotten Tomatoes
Home
Top Box Office
Tickets & Showtimes
DVD & Streaming
TV
News 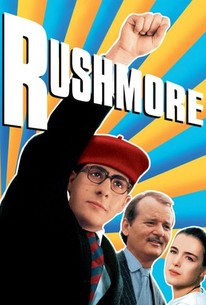 This cult favorite is a quirky coming of age story, with fine, off-kilter performances from Jason Schwartzman and Bill Murray.

When a beautiful first-grade teacher (Olivia Williams) arrives at a prep school, she soon attracts the attention of an ambitious teenager named Max (Jason Schwartzman), who quickly falls in love with her. Max turns to the father (Bill Murray) of two of his schoolmates for advice on how to woo the teacher. However, the situation soon gets complicated when Max's new friend becomes involved with her, setting the two pals against one another in a war for her attention.