You have reached the cached page for https://www.amazon.com/Running-Sahara-Matt-Damon/dp/B002J6ZJKE
Below is a snapshot of the Web page as it appeared on 10/22/2020 (the last time our crawler visited it). This is the version of the page that was used for ranking your search results. The page may have changed since we last cached it. To see what might have changed (without the highlights), go to the current page.
You searched for: Running the Sahara movie We have highlighted matching words that appear in the page below.
Bing is not responsible for the content of this page.
Amazon.com: Running The Sahara: Matt Damon, Charlie Engle, Ray Zahab, Kevin Lin, James Moll: Movies & TV 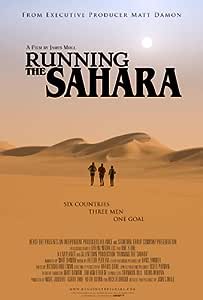 Running the Sahara is a 2007 documentary feature film that chronicles Ray Zahab, Charlie Engle, and Kevin Lin's attempt to run across the entire Sahara desert. They traveled a total of 6920 kilometers, reaching the Red Sea on February 20, 2007.

Matt Damon, Produced and Narrated Running The Sahara and focused on the film's ability to bring light to the water crisis in Africa. Matt's philanthropic interests have always been a part of his career. He was the founder of H2O Africa Foundation, the charitable arm of the Running the Sahara expedition, which merged with WaterPartners to create Water.org in July 2009. Along with frequent co-stars George Clooney and Brad Pitt, supports ONE, a campaign fighting AIDS and poverty in Third World countries. He has appeared in their print and television advertising. Damon is also an ambassador for OneXOne, a non-profit foundation committed to supporting, preserving and improving the lives of children at home in Canada, the United States, and around the world. Damon, along with George Clooney, Brad Pitt, Don Cheadle, and Jerry Weintraub, is one of the founders of Not On Our Watch, an organization that focuses global attention and resources to stop and prevent mass atrocities such as in Darfur. Charlie Engle, USA Expedition Team Leader / Expedition Originator A 42-year-old American father of two boys, a television producer, and one of the best ultra distance marathon runners in the world today, Engle has been a runner, climber, and adventure racer for more than 30 years. He recently finished first in both a race across the Gobi Desert and in a seven-day race through the Amazon jungle. He has crossed the Atacama Desert in Chile, charted the jungles of Vietnam and Borneo, climbed to the top of the volcanoes in Ecuador, summited Mt. McKinley, and has run across Death Valley. He sees running the Sahara as a personal quest to find fulfillment through both physical and mental challenges, believing that it will be an unparalleled journey of discovery. Ray Zahab, Canada Late in 1998, Ray made a life changing decision to leave a pack-a-day smoking habit and very unhealthy life choices behind him. On New Year's Day 2000, he decided to go hiking with his brother John and has never looked back. New to the sport of running in 2004, ultra-marathoning took Ray from the cold north of Canada to the Amazon jungle. But it was the Sahara desert that ultimately captured Ray's heart. After witnessing and experiencing the water crisis and malaria epidemic in Africa, Ray decided to dedicate his future adventures to raising awareness and funding for causes that he supports and believes in..Ray is a member of the board of Directors of the Ryan's Well Foundation, is the official Athletic Ambassador to the ONExONE organization, and is a representative of SpreadTheNet and the founder of Impossible2Possible. On January 7, 2009 Ray and two other Canadians, broke the world speed record from Hercules Inlet to the Geographic South Pole. In the process, Ray became the first person to trek to the South Pole on this traditional 1130 km route solely on foot. This expedition provided young people with an interactive platform and educational resources through a ground-breaking website. Kevin Lin, Taiwan 28 years old and living like a rock star in Taipei, Taiwan, Kevin is one of the most well known endurance athletes in all of Asia. A full-time graduate student, he recently won the first ever 150-mile (241-kilometer) race across the Atacama Desert in Chile, dancing across the finish line while more than half the field had to be rescued from the course.

James Moll, was born in Allentown, Pennsylvania hence, the name of the company. His work as a documentary director/producer has earned numerous awards including the Academy Award®, two Emmy Awards®, the Peabody Award, Edward R. Murrow Award, Cable Ace, and the Christopher, among others.

4.2 out of 5 stars
4.2 out of 5
55 global ratings
How are ratings calculated?
To calculate the overall star rating and percentage breakdown by star, we don’t use a simple average. Instead, our system considers things like how recent a review is and if the reviewer bought the item on Amazon. It also analyzes reviews to verify trustworthiness.
Top reviews

Dave Anthold
5.0 out of 5 stars Absolutely Mesmerizing!
Reviewed in the United States on September 14, 2013
Verified Purchase
Running The Sahara  is a brilliant documentary documenting three individuals - Charlie, Ray and Kevin - who attempt to run across the the entirety of the Sahara - from Senegal to the Red Sea. The film shadows the three runners at home and on the journey. The film tracks their 111 day journey across the Sahara through sickness, wind, sand storms, getting lost and visiting with old friends and new friends they meet along the way. They go through more than 100 pairs of running shoes and battle mental and physical fatigue to pursue a never before done feat.

The film's executive producer - Matt Damon - narrates this film and the cinematography is nothing short of a feature film. The camera moves, angles and the use of the "russian arm" car mounted camera jib provides some of the most spectacular images across the desert.

Running the Sahara: Beyond the Expedition is a 45 minutes "behind the scenes" view of the documentary expedition and highlights some of the struggles the expedition faced including gaining permission to enter Libya. If you love running or great documentary, you will want to watch this epic documentary.
Read more
One person found this helpful
Helpful
Comment Report abuse

Dr. Evan Fiedler
5.0 out of 5 stars Conquer Your Distance
Reviewed in the United States on August 2, 2016
Verified Purchase
Running The Sahara is more than a tutorial on endurance. It is an interactive experience with multiple interesting tidbits that will fuel your next adventure. I have watched this movie several times and reflected on the commitment of these three athletes in their most trying scenarios when turning-over deep in a tough 20-miler. My personal resume (for credibility) is 39 full marathons and completed-to-this-date 37 weeks of 100+ miles/week with the goal of one year...still running.
Read more
One person found this helpful
Helpful
Comment Report abuse

Amazon Customer
4.0 out of 5 stars Great runners! respect
Reviewed in the United States on February 7, 2017
Verified Purchase
You want more! Only runners watch this. Its so incredible interesting that they did it all three! How did they come together? The presentation in the beginning is so breef, so quick. You want more slow and long running pictures, a minute is long in a film it should have been more long sequenses with the three runners. And of course HOW COULD HE CHICKEN OUT???? " I have other oblgations" My ass! this was the one thing, a once in a life time thing and he is not there!? The man who made it possible left them WHAT is that? so embarrassing to watch. Great runners! respect! Love the film How come Matt Damon is in this? is he a runner (dumb question of course he must be :))
Read more
Helpful
Comment Report abuse

cheerdanz
5.0 out of 5 stars Makes me want to run with them
Reviewed in the United States on July 21, 2015
Verified Purchase
Great story and even great for watching while I'm on the mill on long runs. Sadly my neighbor hood is not safe for running outdoors so it's a good movie to run to.
Read more
Helpful
Comment Report abuse

Carmen
5.0 out of 5 stars Great Movie
Reviewed in the United States on January 4, 2013
Verified Purchase
Great Movie, Definitely worth seeing. Extremely inspiring and really shows how your mind will quite before your body. You'll learn that your body is capable of so much more than your mind will tell you it.

Ranchlady2004
1.0 out of 5 stars product failure, movie ok
Reviewed in the United States on April 22, 2017
Verified Purchase
received copy, was excited to watch and DVD quit 1/2 way through. What i watched was interesting, but frustrated when DVD failed.
Read more
Helpful
Comment Report abuse

JKL
4.0 out of 5 stars Enter the world of ultra running.
Reviewed in the United Kingdom on August 13, 2018
Verified Purchase
The film is an extract from a book, which I have read twice. The book superbly creates the context for Running the Sahara, itself, an interesting insight into the world of endurance running and sport generally.
Read more
Report abuse

C D Cleverley
5.0 out of 5 stars Five Stars
Reviewed in the United Kingdom on April 10, 2016
Verified Purchase
Inspirational story of a group of runners challenging an inhospitable area of earth by running through it.
Read more
Report abuse