You have reached the cached page for https://www.amazon.com/Rubberface-Jim-Carrey/dp/B000K7UBT8
Below is a snapshot of the Web page as it appeared on 8/30/2020 (the last time our crawler visited it). This is the version of the page that was used for ranking your search results. The page may have changed since we last cached it. To see what might have changed (without the highlights), go to the current page.
You searched for: Rubberface movie We have highlighted matching words that appear in the page below.
Bing is not responsible for the content of this page.
Amazon.com: Rubberface: Jim Carrey, Adah Glassbourg, Ann-Marie MacDonald, Helene Udy, Scot Denton, Renée Devillers (II), Emily Wilkinson, Rick Ringer, Larry Horowitz, Gabe Cohen, Lynne Deragon, Marla Lukofsky, Jim Tuck, John Lambert (II), Harvey Atkin, Michael Glassbourg, Rebecca Yates, Glen Salzman: Movies & TV 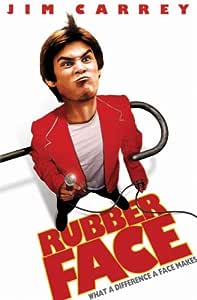 An early short film from comic millionaire Jim Carrey, in which he plays a failing stand-up comic.

3.4 out of 5 stars
3.4 out of 5
19 customer ratings
How are ratings calculated?
To calculate the overall star rating and percentage breakdown by star, we don’t use a simple average. Instead, our system considers things like how recent a review is and if the reviewer bought the item on Amazon. It also analyzes reviews to verify trustworthiness.
Top reviews

Mark F. Roling
1.0 out of 5 stars and is not even funny, rather evil) with JIM CARREY in big letters ...
Reviewed in the United States on July 28, 2014
Verified Purchase
I am a huge JC fan, and have even met him while working at a huge Hollywood studio (initials WB), but this DVD was very confusing. It's got him on the front casing (making a face that is not even in the film, and is not even funny, rather evil) with JIM CARREY in big letters on it, yet he is just a supporting actor. It shows how young he is, but the film is so badly written, and even the punchlines he and the star (female ) work on are so unfunny, it is extremely painful to get through. The acting all the way around is horrible by the cast. Okay, I get it, low budget, but the film based around the female star just has nothing redeeming to it. Then at the end, I finally thought we would get a little young stand-up by Jim as a reward, but he tricks his co-star into getting on stage, who is painfully NOT a comedian, and the audience laughs at the cornball humor, which is embarrassing. Don't buy it, just go to YouTube maybe and see if you can watch some of it off there. This is a real clear-cut example of the distributor just throwing it out there with Jim's name on it to collect spare $$$ off his stardom. If you want something with him as a young, up and comer, buy Once Bitten. :o)
Read more
One person found this helpful
Helpful
Comment Report abuse

Lukey20
2.0 out of 5 stars Rubberface... An indebth look at a social masterpiece
Reviewed in the United States on October 22, 2001
Verified Purchase
Ok so my title may have been misleading... but so is the cover of this video. "JIM CARREY...IS RUBBERFACE" in actuallity Jim was just a secondary character. I bought this because I live in Perth Western Australia and this movie was never released here. I got a few cheap laughs but was dissapointed by two things...
1) Jim Carrey was hardly in this and despite the title of the film "Rubberface" he actually doesn't pull any of his famous wacky faces in this film.
2) The main Character and Jim tease getting together romantically through every scene they are in and nothing actually happened.
not the worst film ever and a definite watch for die hard fans of Jims work wanting to see where he started out.

L. Meyer
1.0 out of 5 stars Painful
Reviewed in the United States on January 1, 2008
Verified Purchase
I made my boyfriend watch this stupid movie with me and about 10 minutes into it, he said this is an After School Special. I about died. That was more funny than this movie ever gets. I like the girl star in it - she is actually a good actress, I wonder what ever happened to her. Anyhow, don't waste your time!
Read more
Helpful
Comment Report abuse

leatha h.
1.0 out of 5 stars Terrible movie
Reviewed in the United States on May 26, 2017
Verified Purchase
Worst movie ever, what a mistake.
Read more
Helpful
Comment Report abuse

Keli
5.0 out of 5 stars A +
Reviewed in the United States on December 25, 2012
Verified Purchase
Great movie, classic Jim Carrey. Been looking for this movie on and off for years on DVD. Reminded to do a search for it during the holidays. Glad I found this so I could make someones Christmas day amazing.
Read more
Helpful
Comment Report abuse

Tyler Parkford
4.0 out of 5 stars 2 Seconds of Fame
Reviewed in the United States on June 16, 2000
Descent movie, but nowhere near the standards of quality Jim Carry material. Most of our time is spent on speculating the teenage troubles of a young girl. Rubber Face is nothing but a late 70's ammateur film that happened to feature Jim Carry midway through the movie. I appreciate the film's heart, set with the main charactor's cute but trutheful phylosophy. There are a couple of short comedy bits that deliver quality laughs, but all in all, the movie is more sentimental then it is humorous. I enjoyed the film's innocent taste, as well as the actors' simplistic yet soothing portrayal of teenage confusion. Seeing the movie, you wonder why such a bad script can deliver even the slightest touch of emotion. This effect is due to the film's fresh acting, especially Jim Carry's role in playing an unimployed comedian who attempts to enlighten the main charactor through his humour.
I admire the film for its simplistic story-line set under a light tone. The picture quality was pretty bad, but what else do you expect from a student film? The cinematography is moderate, the sound is reasonably clear, even the scenes appear professionally synchronized. Like a satisfying appetizer, this movie is refreshing as it is delightful. However, if you have a soft spot for Jim Carry, I suggest viewing his later features, such as Ace Ventura and The Mask.
Do not be fooled by the cover, this is no Jim Carry "knock-out", but the pleasant premises makes up for it. Buy it for easy, quick enjoyment (as well a glimpse of the "softer" side of Jim Carry). Enjoy!

Dangerous Soybean
1.0 out of 5 stars Big J!!!! can't help but laugh.
Reviewed in the United States on April 29, 2001
I understand this was a student film, but why is it still available, and why can you buy it almost anywhere, including TARGET!? The only parts that are laugh-inducing are the parts that aren't supposed to be funny: like when Big J (good God, why did the girl let people call her Big J like it was her name?) reveals that her plans for the night involve her hanging out with her Sony. It's supposed to be sad but it's just funny and then you feel bad for laughing at her. Big J can't help being so dorky. She hangs out with her boombox for Christ's sake. That is, until Jim Carry comes along. He becomes her supporter when she goes to comedy clubs to "perform", but she's not funny. Jim laughs anyway. Way too cheesy. It's so horrible that my brother and I try to get people to rent it, and we tell them that it's the funniest movie we've ever seen....
Read more
4 people found this helpful
Helpful
Comment Report abuse
See all reviews from the United States

Bennny boy
5.0 out of 5 stars Five Stars
Reviewed in Canada on February 3, 2016
Verified Purchase
Only if you are a real Jim Carrey fan!
Read more
Helpful
Sending feedback...
Thank you for your feedback.
Sorry, we failed to record your vote. Please try again
Report abuse

See all reviews from the United States
Pages with related products. See and discover other items: critics choice