You have reached the cached page for https://revengeabc.fandom.com/wiki/Atonement
Below is a snapshot of the Web page as it appeared on 4/18/2021 (the last time our crawler visited it). This is the version of the page that was used for ranking your search results. The page may have changed since we last cached it. To see what might have changed (without the highlights), go to the current page.
You searched for: Revenge Atonement We have highlighted matching words that appear in the page below.
Bing is not responsible for the content of this page.
Atonement | Revenge ABC Wiki | Fandom

Atonement is the 10th episode of Season 4 and is the 76th episode overall.

EMILY THORNE’S DEADLIEST SECRET IS EXPOSED. Jack is torn between his love for Emily, and the new woman in his life, while Nolan and Louise bring Southern charm to East Hampton.

David tells Victoria that he needs to deal with Malcolm Black. He looks up an old cellmate for some drugs that will kill a man while making it look like a stroke. While David is away, Kate pays a visit to Victoria. She confronts her about the photo of Emily she anonymously sent her way. Victoria threatens to expose Kate as an associate of Malcolm Black unless she leaves her and David alone. She challenges her to uncover Emily Thorne’s connection to all this.

Nolan offers to make Louise cohost of his yacht club event. He also offers to help her with the situation involving her brother. In other news, Emily believes that federal agent Kate Taylor is dirty. She may also be her only way to find Malcolm Black. Speaking of Kate, she’s taking a few vacation days. Jack invites her to Nolan’s reopening of the yacht club. He’s reluctant to buy into Emily’s theory that Kate is dangerous.

David secretly approached Emily at Nolan’s yacht club event. He warns her to not come running when she hears there’s trouble. It’s all part of a larger plan. Emily can’t let him go after Malcolm Black alone. She knows that she can get to this dangerous man via a certain FBI agent. Kate figures things out. She knows that Emily is really Amanda Clarke. She claims Black is holding her mother in order to force her to do his bidding.

Margaux refuses to take Daniel back even with a baby on the way. She accuses him of being like his father. This has Daniel recalling memories of how Conrad used to spin things to always serve his best interests. The little people are just insignificant ants.

Victoria learns about the pregnancy. She tells Margaux that a child deserves a father. Daniel loves her. Victoria believes that Margaux loves him, too. She meets with Daniel, who lays out the truth that their family is a bunch of cowards. He’s done running though. He hopes she is, too.

Daniel recalls the time he wrote a letter to his father. It was all about doing the right thing. Conrad shows up just before Daniel is to face judgment. He convinces his son to not throw away his family legacy. In the present day, Margaux calls Daniel. She tries to tell him that she was wrong about what she said. Neither of them wants to be like their fathers. Margaux asks him to come home. Daniel, who is visiting the beach by his old house, is quietly overjoyed.

David returns home to share a glass of wine. He slips the powder he got from his former cellmate into one of the glasses. Victoria is about to take a sip from the poisoned wine. She stops when her conscience leads her to tell the truth about how she helped Conrad frame David. She betrayed him. She was afraid of him because he never told her the truth about her first wife. She used David to get her and Daniel out of a dire situation. David left angry after her revelation.

Emily pats down Kate to find her unregistered gun. She returns the weapon after the two of them agree to work together. Kate lets Emily know that her father stole lots of money from Malcolm Black. He funneled it to charities all over the world. Kate claims that Malcolm believes David kept the loot. She wants Emily to wire her own money into a private account to draw him out. Then they can arrest him minute he withdraws the money. Emily doesn’t buy it though. She calls Kate let know she still does not trust her, who draws her gun and admits that Malcolm Black is actually her father.

Emily reveals that their entire conversation has been captured by her hidden security cameras. She also slipped the bullet cartridge out of Kate’s gun. A violent battle of hand-to-hand combat ensues. Jack realizes that Emily is in danger when Nolan computer econise Kate's fingerprints as Black's daughter. He races to her house as Emily gets the upper hand on Kate. It does not last. Kate and Emily plunge off the second floor balcony. Daniel hears the commotion from the beach. He rushes to the house.

Emily is hurt. She struggles to move. Kate gathers her gun. She searches for the clip. She finds it just as Daniel arrives. He ask is she ok, what is going on, but he turns screams, No! BANG! BANG! BANG! Daniel is shot in the chest. Kate points her gun at Emily. BANG! BANG! BANG! Kate is shot dead by Jack as he arrives on the scene. Daniel clutches the letter he wrote to his father all those years ago about how we can all chose to hide as villains or live as heroes. Emily begs Daniel to hang on, but that’s not something he’ll be able to do so. Emily tells him it was not always fake their relationship she did love him before he side with he parents. His eyes close and his body goes cold Daniel dies just before David and Victoria show up who both heard noise of gunshot from the cottage.

Daniel: Dear Dad, my whole life, I've been told I was destined for greatness based solely on the virtue of my name. I was taught sacrifice was for the foolish. Survival was all that mattered. But now I find myself at a crossroads, and I must decide what I believe to be true. There is no such thing as destiny. Legacies must be earned by the choices we make. I now know that we write our own endings, and we can either choose to hide as villains or live as heroes. 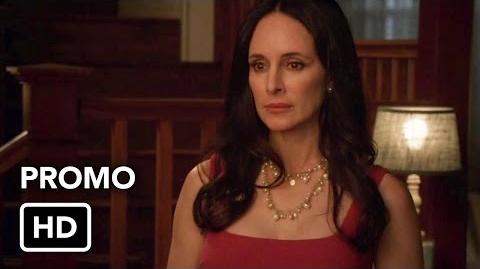 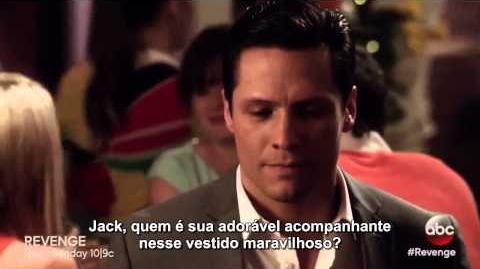 Retrieved from "https://revengeabc.fandom.com/wiki/Atonement?oldid=45746"
Community content is available under CC-BY-SA unless otherwise noted.